The Promised Messiahas wrote over 80 books in Arabic, Urdu, and Persian. Excerpts of his collected works have been translated into English and organised by topic. The Review of Religions is pleased to present these excerpts as part of a monthly feature. Here, The Promised Messiahas elaborates on the subject of how women should be treated in Islam.
Extracts from The Essence of Islam, Vol.III, pp. 311-317.

Issues relating to the treatment of women and children have been grossly misunderstood by most people, and they have consequently deviated from the straight path. It is written in the Holy Qur’an:

The current practice, however, is against this injunction.

In this respect there are two categories of men. There are those who have given women free licence to do whatever they want. Such women pay no heed to religion and conduct themselves in an un-Islamic manner, and there is no one to question them. On the other extreme, there are those who treat women with such severity and harshness that it is hard to distinguish their women from animals. They are treated worse than slaves and beasts. They beat them so mercilessly as if they were lifeless objects. They are treated so cruelly, that it has become a proverb in the Punjab that a woman is like a pair of shoes which may be thrown away and replaced at will. Such attitude is extremely dangerous and contrary to Islam.

The Holy Prophetsa is the perfect example for us in every aspect of life. Study his life and see how he conducted himself in relation to women. In my esteem, a man who stands up against a woman is a coward and not a man. If you study the life of the Holy Prophetsa you will find that he was so gracious that, despite his station of dignity, he would stop even for an old woman and would not move on until she permitted him to do so.

Do not ever consider women to be contemptible and insignificant!! Our perfect guide, the Holy Prophetsa has said:

‘The best among you is he who is best towards his wife.’ How can one claim to be pious when he does not behave well towards his wife…It is unacceptable to get furious or hit one’s wife on the slightest pretense. There have been instances where an enraged husband hit his wife over some slight matter…and mortally wounded her. This is why God Almighty has said concerning them:

There is no doubt that admonition is necessary if a woman behaves improperly. A husband ought to impress upon his wife that he will not tolerate anything which is contrary to the faith, and yet he is not a tyrant who will not overlook any mistake on her part.

For a woman, her husband is a manifestation of the Divine. According to a hadith, had God been pleased to enjoin prostration before anyone but Himself, He would have enjoined upon a woman to prostrate herself before her husband. Hence a man should be both hard and soft suiting the occasion.

With the exception of indecency, all weaknesses and petulant behaviour peculiar to women should be tolerated. I find it shameful that a man should fight a woman. God has made us men, which is the consummation of His grace upon us, and we should express our gratitude for this great bounty by treating women with kindness and compassion.

As for me, I once addressed my wife in a loud voice and I felt that my tone was indicative of displeasure though I had uttered no harsh words. Yet thereafter I sought forgiveness from God for a long time and offered supererogatory prayers with great humility and also gave alms because I felt that my harshness towards my wife might have been occasioned by some unconscious weakness in my obedience to God Almighty.

[Divine revelation to the Promised Messiahas]

‘Such behaviour is not appropriate; ‘Abdul Karim, the leader of Muslims, should be dissuaded from it.’

[Promised Messiah’sas footnote about the above revelation]: …This revelation contains guidance for the whole Jama‘at, that they should treat their wives with kindness and courtesy. Your wives are not your slaves. In point of fact, marriage is a covenant between man and woman. Try therefore not to break this covenant. God Almighty says in the Holy Qur’an:

‘Lead a life of kindness and equity with your wives.’ And it is mentioned in a

‘The best among you is he who is best towards his wife.’ Therefore, be good to your wives both spiritually and physically. Keep praying for them and avoid divorce. A person who is hasty in divorce is sinful in the eyes of God. Do not hasten to break like a dirty vessel that which God has brought together.

A Man’s Right to Divorce

One of our readers has raised the objection as to why the Holy Qur’an has left the matter of divorce to the pleasure of the husband. What he seems to be saying is that men and women being equal, it is unfair to leave divorce solely in the hands of the husband. The answer is that men and women are not equal. Universal experience has shown that man is superior to woman in physical and mental powers. There are exceptions, but exceptions don’t make the rule. Justice demands that if man and wife want to separate, the right to decide should lie with the husband. But what surprises me is that this objection should have been raised by an Arya, according to whose beliefs the status of man is far above that of a woman, and even salvation is not possible unless one begets a male issue…Everyone knows that if an Arya has forty or even a hundred daughters he is still anxious to have a son for his salvation, and, according to his faith, a hundred daughters are not equal to one son…Moreover, Manu Shastar clearly says that if a wife turns against her husband, tries to poison him, or for some other just cause, the husband has the right to divorce her. This is also the practice of all decent Hindus, that they divorce their wives if they find them unchaste and adulterous. Throughout the world, human nature has approved the authority of the husband to divorce the wife for just cause. But, at the same time, the husband is responsible for providing all the needs and amenities for his wife, as Allah Almighty says in the Holy Qur’an:

‘The husband is responsible for providing all the needs of the wife in respect of food and clothing.’ This shows that man is his wife’s guardian and benefactor and is responsible for her well-being. For her, he is like a master and provider. Man has been blessed with stronger natural powers than a woman, this is why he has ruled woman ever since the world was created. The naturally superior faculties which have been given to man have not been given to the woman in the same degree. The Holy Qur’an enjoins that if man has given his wife a mountain of gold as a gesture of his affection and kindness, he is not supposed to take it back in case of divorce. This shows the respect and honour Islam gives to a woman; in fact, men are in certain respects like their servants. They have been commanded in the Holy Qur’an:

i.e., consort with your wives in such a manner that every reasonable person can see how kind and gentle you are to your wife.

A Woman’s Right to Divorce

This is not all. The law of Islam has not left the matter of divorce entirely in the hands of the husband; women too have been given the right to seek divorce through the relevant authorities. Such divorce is designated in Islamic Shariah as khula. In case a husband ill treats his wife, beats her unreasonably, or is otherwise unacceptable, or is not capable of discharging his obligations towards her, or if he changes his religion, or it becomes difficult for the wife to live with him on account of some incompatibility; in all these situations, she or her guardian ought to report to the judge. If he finds that the complaint is justified, he would decree dissolution of the marriage. The judge is, however, also bound to summon the husband and ask him why the wife should not be allowed to leave him.

Just as Islam does not approve of a woman marrying without the consent of her guardian, i.e., her father, brother, or other near male relative, likewise it does not approve of a woman to separate from her husband on her own. It orders even greater care in case of divorce, and enjoins recourse to the authorities to protect her from any harm she may do to herself on account of her lack of understanding.

Propagation of the Human Race through Marriage

Again, the critic alleges that, according to the Qur’an, women are merely a means of sexual satisfaction and are like fields to be tilled. Just look how far this ill-thinking Hindu has gone in his malicious accusations, and how he fabricates words and ascribes them to the Holy Qur’an! To such a one we can only say: The curse of Allah be on the liars. What the Holy Qur’an has said is only that:

Your wives are your tilth for the purpose of procreation, so approach your tilth as you may desire, but keep in mind the requirements of tilth, that is, do not have union in any manner that might obstruct the birth of children….

Of course, if the wife is ill, and it is certain that pregnancy would put her life in danger, or if there is some other valid reason, these will count as exceptions. Otherwise, it is strictly forbidden in the Shariah to obstruct the birth of children.

Every sensible person can appreciate that a woman is described as tilth because children are born of her. One of the purposes of matrimony is that righteous servants of God may be born who remember Him. Another Divine purpose is that husband and wife may safeguard themselves against illicit looks and conduct. There is a third purpose, which is that, because of their mutual attachment, they should spare themselves the pangs of loneliness. All these injunctions are present in the Holy Qur’an, we need not elaborate any further.

Segregation of Women in Islam: Separate Venue, not Value 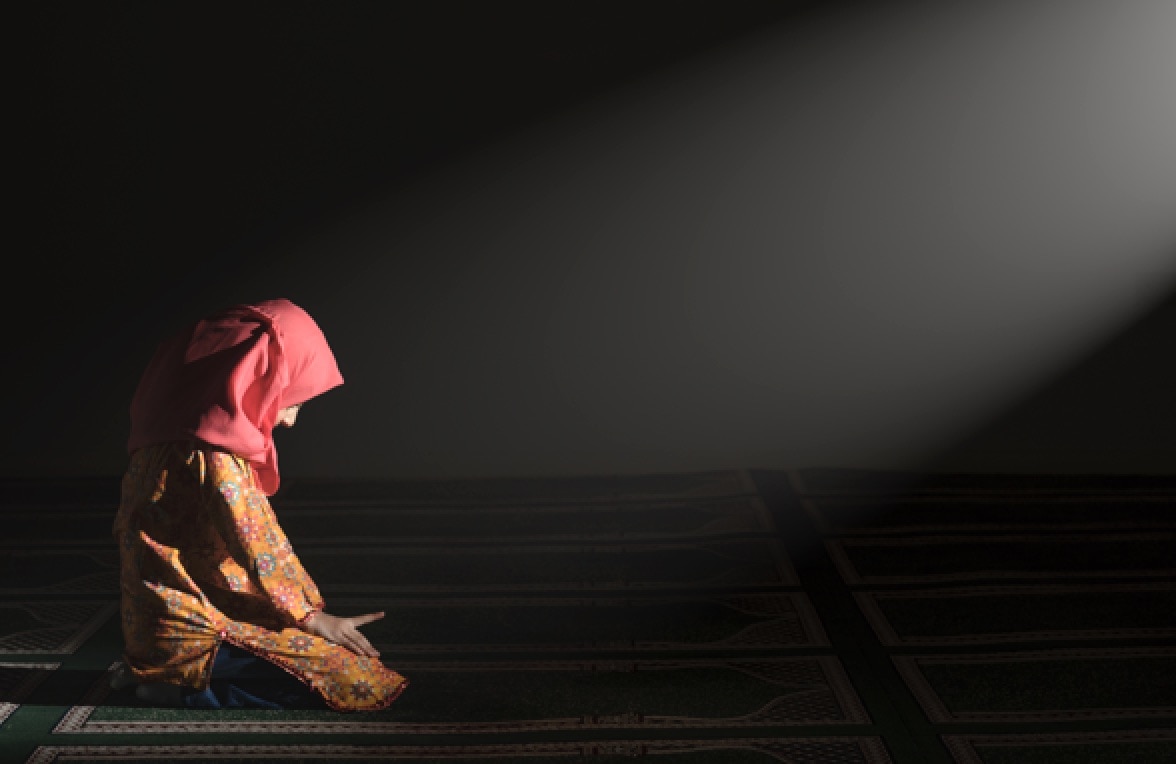 Editorial: The Hijab Ban in Schools