As a young boy, he grew up in turbulent times. India had only recently gone through the painful partition that saw the creation of Pakistan, and there was growing tension between Pakistan and India. The young state of Pakistan was suffering growing pains. Successive authorities in Pakistan began to ignore the principle enshrined in Pakistan’s constitution and abused their positions against the minority Ahmadi Muslims.

Hadhrat Mirza Masroor Ahmad did his primary education at the Taleem-ul-Islam High School of Rabwah and at the young age of seventeen, he became a Musi (that is to say that he signed up for Wassiyyat or a Will, under the plan initiated by the Promised Messiah(as), thus committing a portion, not less than one-tenth, of his lifetime earnings and any property to the cause of Islam). This was also to become his passion when he would later become Khalifa. He has been consistent in encouraging other Ahmadis around the world to also enter the institution of Wassiyyat, and has guided that it is better to make this commitment at a younger age when you are earning more and able to make greater sacrifices rather than at an older age when in the face of other demands it is too late to make those sacrifices.

After gaining his BA from Taleemul-Islam (TI) College in Rabwah he went on to complete his Masters of Science degree in Agricultural Economics from the Agriculture University Faisalabad, Pakistan in 1976.

In 1977, he responded to the call of the Khalifa and devoted his life (that is to say that he became a Waqf-i-Zindagi) for Islam, and as directed by Hadhrat Mirza Nasir Ahmad(ru), Khalifatul Masih III, Sahibzada Mirza Masroor Ahmad Sahib proceeded to Ghana under the Nusrat-Jahan Scheme, a social, educational and economic development scheme that supports a large number of hospitals and schools in West Africa.(see next article)

Upon his return to Pakistan in 1985, he was appointed as Department In-Charge of Financial Affairs. He held a number of senior posts in the community’s international headquarters as follows:

• Whilst he was Nazir A’ala (Principal Director), he also served as Nazir Dhiyafat (Hospitality) and Nazir Zira’at (Agriculture).

• From 1994 to 1997 he was the Chairman of the Nasir Foundation. At the same time he was President of Taza’een Committee Rabwah (Committee for the Beautification of Rabwah). Although this Committee existed at the time of Hadhrat Khalifatul Masih IV, it was brought to life by Hadhrat Mirza Masroor Ahmad. He expanded the Gulshan-e-Ahmad Nursery (adjacent to Jamia Ahmadiyya Senior Section Rabwah) and made personal effort to make Rabwah lush and green.

• In Majlis Ansarulllah (association of Ahmadi males over the age of 40) Pakistan, he was Qaid Zahanat and Sehat-e-Jismani (Secretary Mental and Physical Health and Fitness) in 1995, and Qaid Talim-ul-Qur’an (Qur’anic Education) from 1995 to 1997.

• In June 1994 he was appointed as Nazir Ta’lim (Director of Education).

In December 1997, he was appointed as Nazir A’ala (Principal Director) and local Amir (the Executive Head). After Khilafat, the Nazir A’ala is the highest administrative post in the community.  He remained in this office until his election as Khalifa.

It is therefore evident that even in his early life he was devoted to the community and prepared to make every sacrifice for serving the Khalifa. This was a clear reflection of his inner zeal to serve Islam and it was this same zeal that was to drive him to even greater sacrifices and service that was always carried out with humility, steadfastness and a humble spirit. 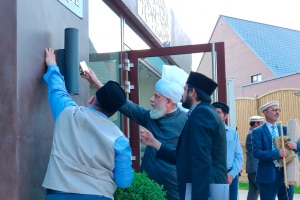