Naturally the impact his Khilafat made was deeply and inextricably linked to his grand personality. Foremost among what Hadhrat Maulawi Nur-ud-Din(ra) stands out for is his all-consuming love for the Holy Qur’an. It was his vade mecum (Latin: “Go with me” meaning a book of reference a person carries with him) and he often remarked that if God had asked him what he wanted most he would beg for the Holy Qur’an. He was wont to say:

“The Quran is my sustenance and is the source of my soul’s refreshment. I read it a number of times a day, but my soul never has its fill. It is healing, it is mercy, it is light, it is guidance.”1

As he possessed an all-consuming love for the Holy Qur’an,  so did he strive to infuse into the members of the Jama’at that love for the Holy Qur’an. His scholarship of it was deep and profound and he never missed an opportunity to expound upon the inexhaustible treasures of wisdom comprised in it. During the last ten days of Ramadhan, he would retreat into the mosque and, despite his physical infirmity and indifferent health, he would occupy himself from morning to evening, barring the times for the five prayer services, in expositions of the Holy Qur’an and responding to questions on subtleties. In this way, he covered one-tenth of the text daily. As a physical exercise alone, having regard to the amplitude of the Holy Qur’an, his age, health and the strain of fasting, it was a tour de force and it fully illustrates his whole-hearted devotion to the Holy Word of Allah.

Hadhrat Maulawi Nur-ud-Din(ra) is also distinguished by his unshakeable trust in Allah the Almighty. He had a living faith in Allah the Almighty and relied totally on Him for all his needs. God also treated him in unique ways miraculously providing for all his needs, at times even before he supplicated. By his precept and by his example did he instil into his followers the same spirit of Tawakkul (trust in Allah).

Even before he became Khalifa his prayers always met with extraordinary fulfilment. As Khalifatul Masih, this became even more manifest and though Allah had taken the Promised Messiah(as) into His loving care and his followers were left with a huge void in their lives, nevertheless their hearts took comfort from the fact that they had, as their spiritual leader, one who possessed a special relationship with Allah the Almighty and whose prayers were readily answered. His companions recall the numerous occasions where, when all seemed lost, they turned to the Khalifa and his prayers were answered. Members of the Community from all over wrote directly to him requesting his special prayers. He would read each and every letter and then supplicate in accordance with the purport of the request.

Next was care for the poor, needy and marginalized. The depth and comprehensiveness of his love for, and sympathy towards, fellow beings and his service to humanity is beyond the pale of expression. He pined for the promotion of the welfare of others and kept himself informed all the time of the welfare of everyone in the Community. Everyone he spoke to felt singled out for his love and affection. He had the same sentiments for everyone without distinction of cast, colour or creed. Among his companions, he was unceremonious and inconspicuous apart from his awe-inspiring and majestic countenance.

As Khalifatul Masih, his role was variegated and multifaceted. In spite of health concerns, he would carry out his manifold functions with a benign  displaying enviable devotion of duty. He would diagnose and prescribe for each patient, meet visitors, advise and counsel, give directives to office bearers, dictate responses in refutation of the critics of Islam and deliberate projects for proselytisation of Islam. Then there were daily lessons on the Holy Qur’an, Ahadith, Islamic Thought and Jurisprudence. Thus he set a very high example of devotion to duty.

But his most important distinction was his instrumentality in safeguarding and fortifying the Institution of Khilafat. This is the single most important event of that epoch and it is one aspect of his Khilafat and great service to Islam, Ahmadiyyat and humanity that needs to be accentuated, reiterated and re-emphasised so that posterity is left in no doubt as to the significance and magnitude of this achievement.

The Promised Messiah(as) had sowed the seeds for the final and universal triumph of Islam. On his demise, the Community was threatened with disintegration. There was at that time four sons of the Promised Messiah(ra), his son-in-law and his respected father-in-law. Yet the whole Community including the afore-mentioned swore allegiance to Hadhrat Maulawi Nur-ud-Din(ra). Although there was not a single dissenting voice at the time of his election, yet he was soon to face persistent opposition from prominent members of the Community who got carried away by their academic qualifications and positions of honour. The firmness and far-sightedness of Hadhrat Maulawi Nur-ud-Din(ra), his courageous and valiant defence of the institution of Khilafat and the upholding of its dignity and authority in the circumstances in which he was confronted, openly and in secret, was a monumental accomplishment.

Where those in opposition to him placed their reliance on cunning plans and devices, Hadhrat Maulawi Nur-ud-Din(ra) placed his complete trust in Allah. Where they placed their reliance on their own capacities and qualifications, Hadhrat Maulawi Nur-ud-Din(ra) placed his entire reliance on the grace and mercy of Allah. Where they sought support in the perpetuity of a legal entity and its corporate constitution, he backed the never-ending powers of God Almighty and His unchangeable Law.

He knew he was justified in Divine estimation; he knew Khilafat was a spiritual realm which had been promised Divine support in clear and emphatic terms in the Holy Qur’an (Ch.24:V.56); he knew the triumph of Islam was to be accomplished under the auspices of divinely guided Khulafa and not by any Anjuman. The passage of one hundred years of the Ahmadiyya Khilafat – replete with countless blessings and phenomenal achievements – has demonstrated in the eyes of man also that Hadhrat Maulawi Nur-ud-Din(ra) was justified in his stand. The extraordinary success of the Ahmadiyya Muslim Community under four subsequent Khulafa as compared with the infinitesimal impact made by its dissident Lahori counterpart has also vindicated Hadhrat Maulawi Nur-ud-Din(ra).

Had Hadhrat Maulawi Nur-ud-Din(ra) succumbed to the dissentients, the Community founded by the Promised Messiah(as) would have been plunged into turmoil and the centenary of Khilafat we commemorate this year would have remained but a distant illusion. However, the Divine promise of the victory of Islam would not remain unfulfilled. The seed planted by the Promised Messiah(as) was to grow and flourish beyond the wildest imaginations of his enemies under the fostering care of Hadhrat Maulawi Nur-ud-Din(ra). When confronted, he neither shirked nor evaded the question of status and authority of the Khalifa, nor did he yield a single inch of ground under overt and covert challenges and threats from those who fancied themselves.  He stood firm as waves of dissent ricocheted off him and retired haplessly. Nothing and no one would affect either his high resolve or the urbanity of his disposition. In a loud and unambiguous voice he proclaimed:

“I declare it with all the emphasis at my command and call God to witness I shall not discard the robe with which He has invested me.”2

This was Hadhrat Maulawi Nur-ud-Din(ra)! In the role Divine wisdom imposed upon him, he acquitted himself with the highest credit. Humankind would forever remain deeply indebted and beholden to him for this unique service to Islam and Ahmadiyyat and being the instrument for the fulfilment of Allah’s promise contained in Ch.24:V.56. May Allah, the Fountainhead of Limitless Grace and Plenitude of Mercy, shower His choicest blessings upon this valiant champion of Islam.

• Ahmadiyyat: The Renaissance of Islam, by Muhammad Zafrulla Khan(ra). 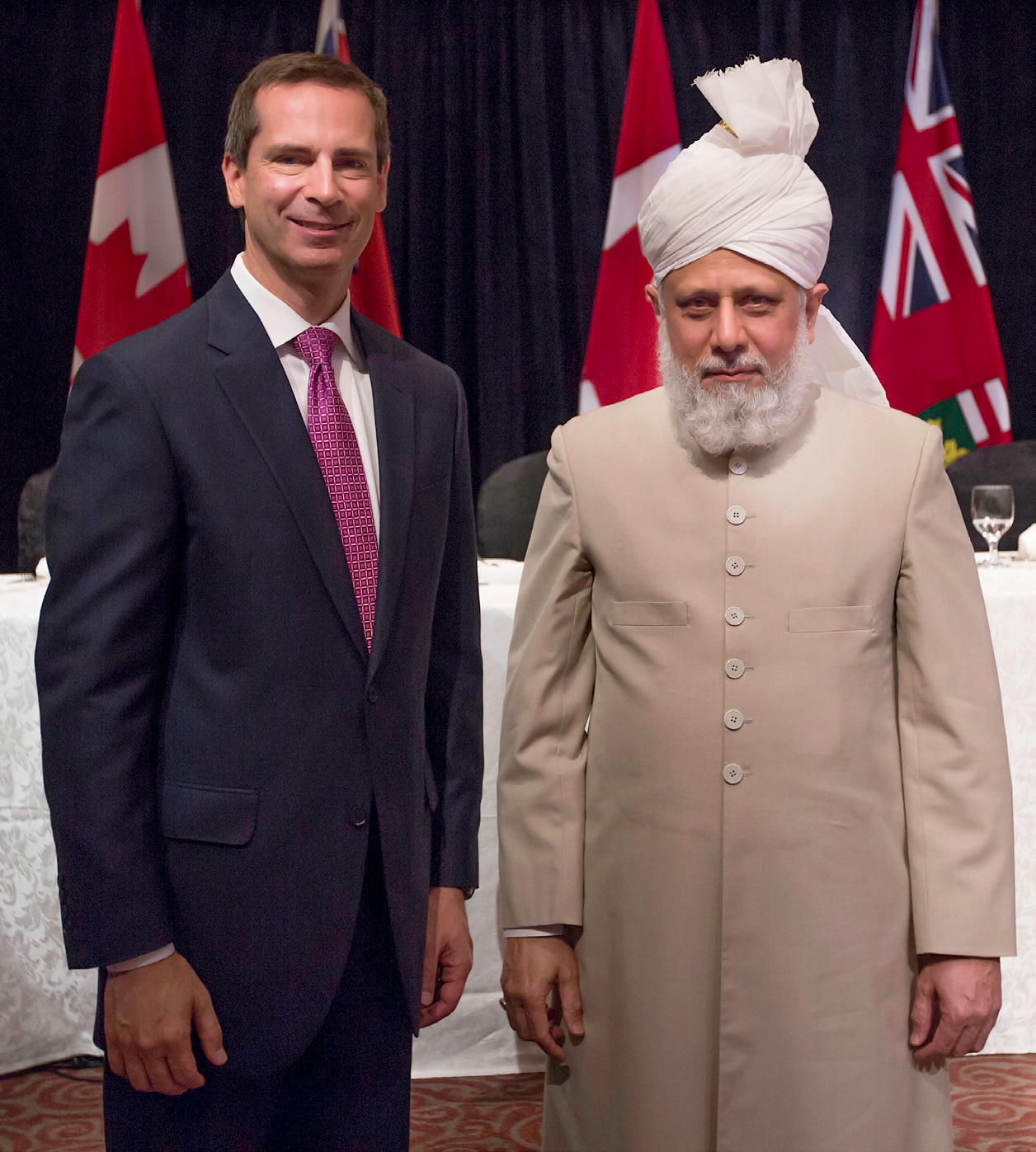 Reception by the Premier of Ontario 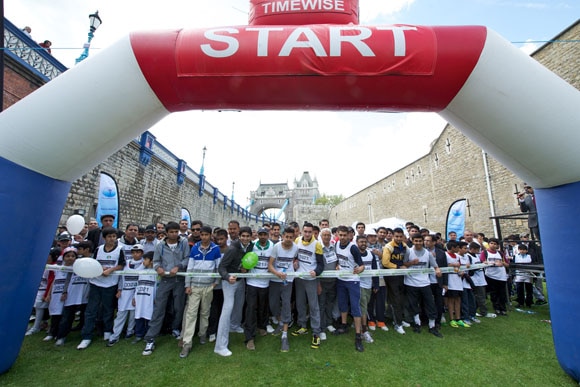 Charity Challenge for the Diamond Jubilee

The Philosophy of the Teachings of Islam – Part 6