For the Ahmadiyya Muslim Community in the United States of America, the year 2020 holds a special place in history. This year commemorates one hundred years since the arrival of Hazrat Mufti Muhammad Sadiq (ra) on American soil to preach the message of Islam.

The initial seeds of Ahmadiyyat, the True Islam, had been planted in American two decades earlier by Hazrat Mirza Ghulam Ahmad (as), the Promised Messiah(as) in his prayer duel with John Alexander Dowie. A self-proclaimed healer and preacher, the Scottish born Dr. Dowie arrived in San Fransisco, California in 1888 and founded the Christian Catholic sect. He eventually settled in Evanston, Illinois, near Chicago and began his ministerial work in earnest. Here, he slowly laid the framework for his city of Zion, the center of his mission and where his followers lived and worked. On June 2, 1901 he declared himself to be Elijah III and revealed himself to be a bitter enemy of Islam. He carried out a vicious and abusive campaign against the Holy Prophet (sa) and made every attempt to discredit the religion and humiliate its Prophet.

This abuse of the Holy Prophet (sa) greatly distressed and tormented the Promised Messiah (as) who, in the absence of any defense by other Muslim leaders, challenged Dr. Dowie to a prayer duel. Of the two of them, whoever was the false messenger, God should cause him to die (of natural causes) first. Although Dr. Dowie did not publicly acknowledge this challenge, the world press did, and it was published in over forty newspapers around the world. In 1903, after no response from Dr. Dowie, the Promised Messiah (as) reissued his challenge to a prayer duel. Under pressure from the press and his own followers, Dr. Dowie was forced to respond to the challenge and indirectly accepted it. At the time he was at the height of his power. His followers numbered in the hundreds of thousands and his wealth was massive.

However, in a matter of a few years, he lost everything. Through a series of scandals and health problems, he lost his wealth and influence, his followers abandoned him as did his family, and he died alone and disgraced on March 7, 1907. As the ranks of Dr. Dowie have all but disappeared from the world and history seems to have forgotten him, the followers of the Promised Messiah and the message of Islam and Ahmadiyyat have flourished in the United States in the past one hundred years.

Under the direction of Hazrat Mirza Bashiruddin Mahmud Ahmad, Second Worldwide Head of the Ahmadiyya Muslim Commuinty, Hazrat Mufti Sadiq(ra) departed from England on January 26th, 1920 and arrived in Ellis Island on February 15th, 1920 with the goal of establishing the first Ahmadiyya mission in North America. His arrival was not without challenges; he was initially denied entry and detained for almost two months while awaiting a reply to his appeal for entry. While in detention he remained busy and by the time he was granted entry into the United States, he had converted more than a dozen individuals to the cause of Islam and Ahmadiyya.

The initial converts came from all walks of life and from all ethnic groups, but the message of Islam especially resonated with African Americans. At a time when the country was heavily segregated along racial lines, Ahmadi Muslims stood shoulder to shoulder and prayed side by side. These early converts represented the racial and cultural composition of America in a way that was deliberately omitted from the larger American narrative, which was distinctly white. ‘Separate but equal’ was the best many could hope for while the racist and often deadly Jim Crow laws of the South heavily impeded the growth and movement of African American communities.

For these Muslims, the message of racial equality and universal brotherhood in Islam had a profound impact that brought them into the folds of Islam in large numbers. Many pioneers of the Ahmadiyya community in America were of African descent, just a few generations removed from slavery, and they worked tirelessly in spreading the peaceful message of Islam and establishing centers in Detroit, St. Louis, Chicago and Philadelphia. So profound was the influence of Ahmadiyya on them, that many historians believe the American Civil Rights movement can trace its influence to the teachings of Islam.

Establishment of the Ahmadiyya Community

In October of 1920 Hazrat Mufti Sadiq(ra) moved the headquarters of the community to Chicago, Illinois and the first Ahmadiyya mosque was established on Wabash avenue. The Wabash mosque, now known as the Sadiq Mosque, is one of the earliest mosques in the United States and the oldest standing mosque in the country. The construction of this mosque was funded predominantly by donations from African American converts. In 1921, he established The Moslem Sunrise, the first Muslim magazine in the country.

This was a quarterly publication that was devoted to presenting Islam in its true light to Americans and is still published today. The first issue was published in July of 1921 and three thousand issues were distributed for free in Highland Park, Michigan. Copies of the magazine along with other literature was sent to prominent figures of the time including Thomas Edison, Henry Ford, and President Warren Harding. Hazrat Mufti Sadiq(ra) also brought the first English translation of the Holy Quran to America along with other Islamic literature. Until the 1960s, most of the literature available to American Muslims came from the Ahmadiyya community.

In the three years that Hazrat Mufti Sadiq(ra) worked in America, he attracted thousands of devotees to Islam and Ahmadiyya, predominantly in Chicago and Detroit. He held weekly general meetings with the public where he lectured on specific topics and answered questions. He was invited by different churches and societies to speak about Islam and his lectures and speeches were published all over the country. He wrote dozens of articles for various American periodicals and newspapers. He distributed 15000 leaflets on Islam and sent one thousand pieces of literature to libraries across the country. Before his departure in 1923, he was awarded an Honorary Doctorate in Literature Degree by Jefferson University in Chicago and was also elected a member of The Press Congress of the World. Hadhrat Musleh Maud (ra), the second worldwide head of the Ahmadiyya Muslim community, once stated regarding the Ahmadiyya mission in America that it would ultimately triumph in the United States and that one day the kalimah (declaration of faith) would echo throughout the country. Through the initial tireless efforts of Hazrat Mufti Sadiq(ra), the truth of this statement has manifested itself over the years in the United States as the community has prospered and built itself into the history of Islam in America.

Today, the Ahmadiyya Muslim Community in the United States has approximately 20,000 members in sixty chapters and is established in almost every major city in the country. To commemorate this historic occasion, communities will begin the centenary celebrations with communal tahajjud(pre-dawn) prayers in all the local mosques and community centers on February 15th, 2020. Many local chapters are also engaging in community service projects throughout the year such as feeding the homeless, volunteering in food pantries and shelters, tree planting, cleaning of public parks and roadways, and food drives. Local programs and events are also being held to celebrate the history of the community, and on May 9th, 2020 there will be a national “Open Mosque” centennial Iftar dinner during the month of Ramadan. Local mosques will welcome community members to visit their mosques and share an iftar meal with them while celebrating and learning about the history of the Ahmadiyya Muslim Community in America. 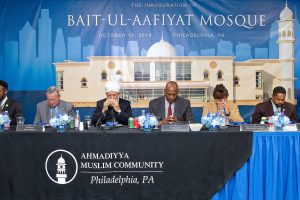 ‘This is Where it All Began’: An Interview with Imam Azhar Haneef