An address delivered by Hazrat Mirza Bashiruddin Mahmud Ahmad (ra), the 2nd Worldwide Head of the Ahmadiyya Muslim Community on 30th October 1946 after the Maghrib [the Muslim prayer offered just after sunset] prayers in Qadian [India].

In the Name of Allah, the Gracious the ever Merciful

The Right has Precedence over the Left

There are certain injunctions of the Sharia [Islamic law], which may appear to be very minor, however when one ponders over them, they are of such importance that abandoning them can adversely impact the moral character of an entire nation. For example, one of the unique features of Islam is that in every action of his, the Holy Prophet (sa) gave precedence to his right over the left.[1] Whilst drinking water, eating food, performing ablution or taking a bath, the Holy Prophet (sa) always gave precedence to the right. In other words, in all important acts, the Holy Prophet (sa) prioritised the right, except for those actions which have an element of impurity whereby the left was given precedence; for example, one ought to clean themselves with the left hand after having answered the call of nature.

To give precedence to the right is a trait which is not only unique to humans, but is also found in many animals as well. Many animals also use the limbs of their right for various actions, and although it is not in the same manner as humans, but nonetheless they have a tendency to use their limbs on the right. For instance, if one tries to ride a horse from a stationary position, it will move its right leg first. Similarly, there are many other animals which will use their limbs on the right side first; a lion will always strike with its right paw. However, it may not necessarily be that animals act exactly as humans do in this respect, but majority of them use their right side. Likewise, the majority of a population are right-handed, irrespective of whichever nation they may belong to. From this it is evident that human nature gives preference to the right. It is in light of this, that the Holy Prophet (sa) has given preference to begin any act with one’s right hand.

In the Holy Qur’an, Allah the Almighty has used the word Yameen and Shimal for right and left respectively:

‘And if he had forged and attributed any sayings to Us, We would surely have seized him by the right hand’

The word Yameen (right) has been used here as well. Thus, Allah the Almighty and all of His prophets (as) have always prioritised the right.

From this incident it is evident that the Holy Prophet (sa) had great regard for the right. However, in this present day and age, these practices are being neglected and overlooked. For example, I have been observing for quite some time that during dinner functions, food is distributed to the left, however this is completely against the unique characteristics of Islam and the noble practise of the Holy Prophet (sa), yet despite this, people do not show any regard for this.

For instance, these days, [Maulana Jalal-ul-Din] Shams Sahib is here in Qadian and many people have been inviting him for food and they also invite me as well. It is the desire of the hosts to present the food or tea to the Khalifa first. Their desire to do so is indeed understandable but after presenting me with the food, they begin to serve to the left. The reason for this is because they have seated the guests (i.e. Shams Sahib and Syed Munir Al-Husni) to my left. After the Khalifa, the guests are considered to have the greatest right to be served the food, hence they are compelled to start serving to the left. However, one should remember that no one has greater honour than the Holy Prophet (sa), therefore if the Holy Prophet (sa) has stated that one should start everything from the right, then who can say that it should start from the left?

If the guests have been seated to the left, the food should still be served to the right, even if the guests remain seated to the left. This is to serve as a lesson for [the host] who made this mistake as his invited guests would be served last If he mistakenly served the food to the left, he will not be able to recall this error of his in the future, hence it is necessary that one who seats his guest to the left should serve the food to the right so that it serves as a means of punishment for his error. Nowadays many people consider punishment for a wrong as a mere punishment alone and not as a means of bringing about a reformation. In fact, the true purpose of a punishment is to reform. Many of our past scholars and saints would impose hardship and punishment upon themselves as a means of penance. Likewise, as long as the spiritual light remained within the followers of Jesus (as), the saintly individuals among them continued to perform all kinds of penance in order to reform their own selves.

It is mentioned in relation to a saintly individual that he would spend the entire night whipping himself. Thus, he would inflict this punishment on himself. This is a profound principle in regards to reformation. Therefore, one should not elude punishment, but rather should accept it so that one can bring about their reformation. This is a part of Tassawuf [Sufism] and undergoing hardships is deemed as an essential principle according to the righteous ones and has always been practised.

Once I decided that until Allah the Almighty does not accept a certain prayer of mine, I will not sleep on the bed and will instead sleep on the floor and thereby endure hardship for myself. However, on the very first night, Allah the Almighty, out of His grace, informed me that He had accepted my prayer and instructed me that I should now go and sleep on the bed. Therefore, if one imposes these hardship upon themselves as a matter of principle and is free from any element of pretence, it is considered as a part of Tassuwuf. Some people punish themselves by remaining hungry and go without food for many days, others do not sleep and continuously remain awake for many days and in this way they expiate for any wrong committed.

Therefore, if a non-Muslim can show so much regard, then will those who consider themselves Muslims not show regard for the Holy Prophet (sa)? He was a Christian and was in the capacity of a ruler of the state, while I was a member of the public in contrast, but despite this, he showed great respect. When he observed that I was eating with my right hand, he also began to eat with his right. Afterwards, we also spoke about this and I informed him that this was an injunction of Islam to eat with one’s right hand, which he commended and also stated that it was in fact in accordance with one’s nature. Thus, a Muslim should instil great respect for the Holy Prophet (sa) in his heart. Those who fail to honour these seemingly minor teachings of the Holy Prophet (sa), consequently will never be able to adhere to the major commandments of the Holy Prophet (sa). 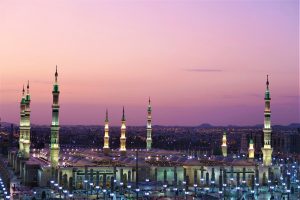 Who are We to Judge?