‘There are, if I may so say, three powerful spirits, which have from time to time, moved on the face of the waters, and given a predominant impulse to the moral sentiments and energies of mankind. These are the spirits of liberty, of religion, and of honour.’ [1]

The legend of Toyotomi Hideyoshi, the great Samurai warrior, tells of a peasant boy sent by his family to a nearby temple in order to become a priest. Hideyoshi absconded at the age of 15, eventually entering into the services of Oda Nobunaga, an ambitious Samurai general, as his sandal-bearer. [2] One cold winter’s night, Hideyoshi pressed his master’s straw sandals to himself under his kimono in order to keep them warm. Nobunaga, impressed by his dedication and sense of honour, rewarded his sandal-bearer’s intellect at each turn, as Hideyoshi began to distinguish himself as the military leader who would eventually unify Japan in the 16th century.

Hideyoshi’s loyalty to his duty is renowned in Japanese history as a practical depiction of the word Samurai, denoting ‘one who serves; with this service ethic spawning the roots of Samurai nobility, both social and spiritual.’ [3] Following Japan’s pacifism and with civil society at the precipice of peace, the nation’s need for its master swordsmen declined. Thus, the Samurai, formerly engaged in intense martial training, devoted their time instead to furthering their own spiritual development, scholarly pursuits, or in service to Japan’s traditional arts – from monochrome ink painting to flower arranging and Zen rock gardens.

The art of sadō, the Japanese tea ceremony, particularly flourished in Japan’s era of post-pacifism due to its emphasis on simplicity and tranquillity; consequently, enabling the Samurai to gain critical insight into realism through contemplation. The practice of preparing the tea was introduced to the Samurai by Buddhist monks who used the tea to stay alert during periods of meditation. However, the ritual nature of the ceremony particularly intrigued the highly educated Samurai, and thus, the peaceable custom was adopted and subsequently flourished through the people’s emulation of the warrior elites’ practises.

The culture of the Samurai was influenced by the spiritual philosophies of Buddhism, Zen, and Confucianism, whilst also to a lesser extent, ideologies from the native Japanese religion of Shintoism. Zen meditation, as well as the Buddhist concept of reincarnation, led the Samurai to overcome the fear of death and to abandon futile violence, while Confucianism laid great emphasis on the importance of loyalty and honour. The theoretical obligations of the lord-retainer relationship of the Samurai were further emphasised by the teachings of Confucius, whose works were a required reading for the Samurai class.

It was this fierce loyalty demonstrated by the finest Samurai warriors which led to the unwritten code of chivalrous conduct, outlook, and customs known today as Bushido or ‘the precepts of knighthood.’ Nitobe Inazo, the author of Bushido, the Soul of Japan, elucidates these eight virtues:

‘Justice is the bone that gives firmness and stature. Without bones the head cannot rest on top of the spine, nor hands move, nor feet stand.’

Confucius explains: ‘Perceiving what is right and doing it not, reveals a lack of courage.’

‘Love, magnanimity, sympathy and pity are traits of benevolence, the highest attribute of the human soul. Confucius often said that the highest requirement of a ruler of men is benevolence.’

‘Respect should be the expression of a benevolent regard for the feelings of others; in its highest form respect and politeness approach love.’

Living modestly was encouraged ‘for the exercise of abstinence. Luxury was thought the greatest menace to manhood, and severe simplicity was required of the warrior class.’

‘A vivid consciousness of personal dignity and worth characterised the Samurai, who were raised to value the duties and privileges of their profession. Fear of disgrace hung like a sword over the head of every Samurai.’

‘Loyalty to a superior was the most distinctive virtue of the feudal era’, and paramount importance was placed on loyalty to one’s nation.

The Samurai were taught that ‘Men should behave according to an absolute moral standard, one that transcends logic. It was a man’s obligation to teach his children moral standards through the model of his own behaviour.’ [4]

In a report sent by St. Francis Xavier to Father Ignatius Loyola in Rome, the Christian Missionary remarked upon the importance of the values of Bushido to the Japanese nation:

‘They are of a kindly disposition, not at all given to cheating, wonderfully desirous of honour and rank. Honour with them is placed above everything else. There are a great many poor among them, but poverty is not a disgrace to anyone. There is one thing among them of which I hardly know whether it is practised anywhere among Christians. The nobles, however poor they may be, receive the same honour from the rest as if they were rich. They listen with great avidity to discourse about God and Divine things… they do not worship any gods under the form of beasts. Most of them venerate certain ancient men, who, as far as I have been able to ascertain, used to live after the fashion of the old philosophers.’ [5]

The Bushido code of conduct served as a demonstration of model behaviour for every social class and was heavily based on ideologies laid out by Confucianism; as Confucius’ ‘calm, benignant, and worldly-wise character of his politico-ethical precepts was particularly well suited to the Samurai. His conservative tone was well adapted to the requirements of these warrior statesmen.’ [6] Yet, while Xavier’s report outlines the basic tenets of Bushido from the 16th century when Confucianism pervaded throughout every aspect of Samurai society, its influences can still be felt within the moral education, social ethics and civil order favoured by Japan today.

The Japanese nation’s collective psyche and ethos is one which consciously or unconsciously has in some measure received an impetus from the Bushido code in a manner which transcends time. Even as Japan now identifies as one of the least religious countries, the sacred is often inextricable from the secular. For example, the morals and ideological practices of ancient religions are still flourishing and honoured, whilst visiting sacred sites is limited to national holidays and life-cycle ceremonies. Yet, more and more Japanese individuals are now turning to seek some sort of spiritual experience through contemplation and meditation- a quality of the Samurai spirit. Thus, understanding the foundation laid by these great warriors’ ideals might provide an insight into the values of honour, integrity and respect which the world admires in the Japanese nation today.

About the Author: Naba Ghauri Syed holds a 1st class Honours in English Literature and is the joint-head of Japanese subtitles for Muslim Television Ahmadiyya (MTA) International. 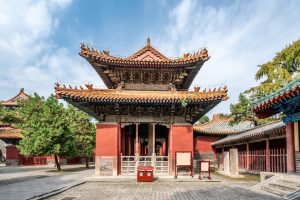 Places of Worship – The Qufu Temple