­­­­And when My servants ask thee about Me, say, ‘I am near. I answer the prayer of the supplicant when he prays to Me. So they should hearken to Me and believe in Me, that they may follow the right way.’

Aishah (ra) relates: the Holy Prophet (sa) stood so long during his voluntary prayer at night that the skin of his feet would crack; so I said to him: ‘Messenger of Allah, why do you stand so long in Prayer when Allah has suppressed in you in the past and for the future all inclinations towards sin?’ He answered: ‘Then should I not wish to be a grateful servant of Allah?’

Islam, The Holy Prophet (sa), Hadith of Bukhari and Muslim

When you stand up in prayer, you should know for certain that your God has the power to do all that He wills. Then your prayer will be accepted, and you will behold the wonders of God’s power that we have beheld.

Lord of creation! no one other than thee pervades all these that have come into being. May that be ours for which our prayers rise, may we be masters of many treasures!

He who prays for his fellow man, while he himself has the same need, will be answered first.

Is any one among you suffering? Let him pray. Is any cheerful? Let him sing praise. Is any among you sick? Let him call for the elders of the church, and let them pray over him, anointing him with oil in the name of the Lord; and the prayer of faith will save the sick man, and the Lord will raise him up; and if he has committed sins, he will be forgiven. Therefore confess your sins to one another, and pray for one another, that you may be healed. The prayer of a righteous man has great power in its effects. Elijah was a man of like nature with ourselves and he prayed fervently that it might not rain, and for three years and six months it did not rain on the earth. Then he prayed again and heaven gave rain, and the earth brought forth its fruit. 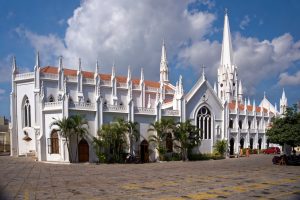 Places of Worship – The Great Synagogue of Budapest
Natural, Moral and Spiritual States of Man
Comment