Stonehenge is an ancient collection of huge stones formed in concentric circles and related patterns and is thought by many scholars to align with the stars and the position of seasonal astronomical events. At that time – in the megalithic period – the priests of the site would have exerted great influence on their communities by being able to predict the seasons. The site was established and enhanced in phases from the fourth to the second millennia BCE, at the same time that the major and well-known prophets were establishing monotheism in the Middle East and North Africa. Experts believe that the first structures on the site were wooden, and then over time larger and larger stones were imported.

The culture at the time in England was quite primitive, consisting of farming communities using basic tools, and perhaps some limited contact with people in Ireland and mainland Europe. Stone circles appear to be a significant feature at this time, as many similar formations are found elsewhere in the UK and Europe and date from a similar period. Professor Thom, who has studied and written about Stonehenge, believed that these were designed as solar and lunar observatories. [1]

Although the need for a calendar may have been largely to predict and manage key events such as harvests for their crops, there was clearly a fascination with the heavens, and probably a growing curiosity of what lay beyond their local environment. This is evidenced by strategic stones across the site used to align the observer to key astronomical alignments such as solstices or the furthest extent of the rising of the moon on the horizon. There are also many claims of other alignments to star formations, but some of these are unproven.

Gradually a sense of religious practice grew, with ceremonies at the site, and many local tribes and villages visiting at significant times of the year, much as people go on pilgrimages today. In the second phase of the site, a large avenue was created for visitors. A ditch separated the central circular compound where the stones stand from the surrounding area.

It is hard to pinpoint the religious significance of Stonehenge, but it did play a ceremonial and focal role for the megalithic communities of the time. It is possible that even 5,000 years ago, as with other parts of the world, these people may have begun to receive revelations and spiritual guidance. Nowadays the site is claimed by pagan Druids, but they are only associated with the site around 3,000 years after it was built, and it is almost impossible to know with certainty the spiritual beliefs of the original custodians of Stonehenge. 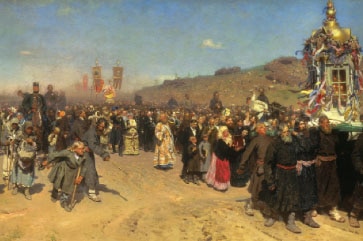 A Study of the Origins and Features of Easter

The Essence of Islam – Part 28

Restoring the Dead to Life