A brilliant journalist and documentarian with a special aptitude for story-telling, Syed Taalay Ahmed served under Muslim Television Ahmadiyya (MTA) and also worked in The Review of Religions. In August 2021, while on assignment in Africa to film a documentary, Syed Taalay Ahmed was attacked by robbers and was ultimately martyred in the field of duty. The shock of his martyrdom reverberated around the world and was covered internationally by various media outlets. He possessed many great qualities, which perhaps can best be encapsulated by the words of His Holiness, Hazrat Mirza Masroor Ahmad (aba) who said, ‘He was a diamond which has now departed from us.’ The following is a unique incident shared by Syed Taalay Ahmed’s brother which gives some insight into the kind of caring, thoughtful, and wise person he was.

‘So, what do you think it means?’ I asked my brother Taalay inquisitively.

Taalay lay quietly on the floor contemplating my description of a dream I had had before we got up for prayer. Having just read Fajr [prayer right before dawn] together in his small living room area, we had folded the prayer mat away and remade our makeshift beds that we now lay in. Taalay had given me the sofa to sleep on whilst he chose to put himself on the floor at the expense of his own comfort. I was staying at his house that night as we were both set to play at the 2018 European Football Tournament organised by Majlis-e-Sehet [Department of Physical Wellbeing] UK that weekend, which was being held not far from his flat. Taalay was representing the Fazle-Umar team and I was playing for the UK A Team (mostly keeping the bench warm).

Taalay had considered the role that I played for my team more important than his own so he gave me the sofa to sleep on, a small reflection of two of his key characteristics: humility and hospitality. Although we played in similar positions, on equal footing at the outset of the group stages of the tournament, Taalay wanted me to succeed more so than himself. That’s not to say he didn’t take it seriously either. You see, Taalay had decided to sleep in the cramped conditions of his living room alongside me that night because in his room, another family member had a cold and he didn’t want to catch it in case it hindered his performance on the pitch. Taalay loved playing sports and took it seriously, a passion that anyone who had ever played football or cricket with him in particular, will have recognised and respected. Clearly this passion of his didn’t compare to his desire to serve others, even at his own expense.

My memory of this occasion is surprisingly vivid. It could be because it was on the eve of an important occasion, having trialled numerous times to get onto the UK team and compete on a national stage. I was anxious yet excited at the opportunity to perform for the team in my debut. However, the reality is that it was more likely because I hadn’t spent a significant amount of time with my brother in recent years in part due to living and working in a city miles away from where he was. We were sharing a room for the first time perhaps since our childhood, something I fondly look back on. For this reason, my interactions with Taalay on this specific weekend, where I stayed and shared a room with him, are more memorable than others.

I remember his pronunciation during his tilawat [recitation of the Holy Qur’an] sounding specifically and authentically Arabic when he lead us both in Fajr prayers. He seemed to be making a conscious effort to sound the prayers out phonetically. It was around this time in his life that Taalay’s neighbour and close friend, Ibrahim Ikhlaf, an Arabic teacher at Jamia UK [Ahmadiyya Institute for Languages and Theology], had been teaching him how to develop his reading and understanding of the Qur’an and this was manifesting itself in his recitation that morning. I didn’t say anything to him about it afterwards, but remember thinking to myself that he had taken his recitation ‘to the next level.’ In this moment, I realised that we sometimes assume our base level of knowledge is enough, whether it be our tilawat, ability to read Arabic correctly or translation of namaz etc. If or when our parents and guardians stop teaching us, does this mean our knowledge is sufficient and doesn’t need to be enhanced further now that we have a basic understanding? Without saying anything, at 28 years old, Taalay had shown me that learning and the urge to improve should never stop in all areas of faith, no matter how small or insignificant you may consider it. I was lucky to have stayed with him on this occasion to be reminded of this lesson.

Not long after we had finished offering prayers I scrambled back into bed, and as I lay there lost in thought, piecing together my dream in a way I could clearly describe to Taalay, I heard the low murmur of Qur’anic recitation coming from the other side of the room. Although it was dark, I realised Taalay was reading the Qur’an off his phone screen trying not to keep the room light on longer than he needed to so I could sleep. Again, here he embodied two faith inspiring characteristics. One being the consideration for others but more importantly in this instance, the practice of reading the Qur’an after Fajr. Taalay constantly set a good example for me to follow and although I did not read Qur’an on this particular morning, it is an area I’ve been working to improve ever since.

Morning light started to creep in through the gaps in the curtain and the London sun climbed up Taalay’s figure towards his face. At this point he was back in his bed (it was hardly a bed, just Taalay sandwiched between two blankets on the floor). This is when I told him about my dream. I remember looking at him, his hands clasped behind his head staring at the ceiling in quiet contemplation. After a little while I started to think maybe he hadn’t heard me properly. Just as I thought about repeating my question, he calmly and quietly responded with his interpretation of it. He only made reference to a part of the dream which I now believe to have been a sign towards the current pandemic we are living through. However, he didn’t make any comment on the part of the dream that included him. Maybe he understood it better than I did at the time but didn’t want to cause me any concern. Little did I know or understand at the time that it may have been a hint at what was to come, which in my opinion referred to the martyrdom of Taalay himself.

Sunlight continued to seep in further and cascade Taalay’s shadow across the small floor space. There wasn’t much room in the flat but it didn’t matter where you were when with Taalay; you were in the presence of someone who’s company overcame any small place or difficult situation. I’ve been sat on the Megabus (notoriously cheap, somewhat dysfunctional and cramped bus service) for seven hours on multiple occasions with Taalay when journeying from Hartlepool to London for Jama’at [community] events and it could feel like a holiday! Stepping off at our destination with priceless laughs and memories. Only with Taalay Bhai.

Pondering over Taalay’s interpretation and what seemed to be a purposeful omission of his understanding about part of the dream that involved him, I suddenly realised we had to be up again soon so I turned over and went back to sleep.

The Martyr’s Shadow that follows him, hides from the sun.

For his brother’s figure offers shade, protecting this fortunate one.

The days run long and the nights pursue,

The moon’s reflection is a calming break,

Perhaps the worst is behind him.

The Martyr’s Shadow accompanies his friend, the best place to be.

But his brother was never forever, this was a spiritual decree.

He has gone deep into the night,

His figure that shaded so well,

Was only one to borrow.

The Martyr’s Shadow patiently waits, as the sun begins to rise.

But his brother has not returned; tears cloud the Shadow’s eyes.

He was here for one moment,

And the next he was gone.

The Shadow gazes towards the twilight,

Realising his mentor has journeyed on.

For this hero cannot be replaced, a void left like no other.

When will he follow the Martyr beyond the night?

Someday his time will come,

In the meantime, he will stand in front of the light,

So just like his brother, can offer shade to someone.

I continue to think about the example Taalay has left for us to follow. Now more so than ever, I realise I was learning from him, and he was teaching me by setting an extraordinary example. I want to recollect and share these lessons to the best of my ability. I believe it may be particularly pertinent to Khuddam and Atfal [Ahmadi youth and children], although no doubt others may benefit from it as well, Insha’Allah [God-willing]. 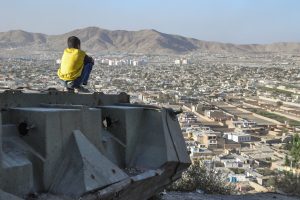 Peace in the “Unfortunate Land” of Kabul; a Mission of Hope

Humanity First – Wiping Away the Tears Of the Distressed
Comment