The Ellora Caves in the Maharashtra state of southern India are one of the largest rock-cut temple complexes in the world, featuring temples and monuments related to Hinduism, Jainism and Buddhism. This UNESCO World Heritage Site is thought to date from around 600 CE and was excavated over a period of several hundred years to reveal its current form.

The site consists of over one hundred sacred caves and many monasteries and temples hewn out of the basalt volcanic rocks. Initially the excavation began in the 5th and 6th centuries CE when Buddhist monks carved out 12 caves with monasteries, meeting halls and temples. Three hundred years later, Jain monks began to add their own caves. Statues and scenes carved within the temples remind worshippers of the struggle between good and evil, and the moral qualities that they should strive to adopt.

Hindu priests arrived in the 7th century CE to carve out 16 caves and the Kailasa Temple which has the largest carved roof in the world, and was meant to represent the mountain abode of Shiva in Tibet. Some estimate that it took 7,000 labourers around 150 years to complete the structure of the Kailasa Temple, removing enough stone to create two Greek Parthenons! In the process, the excavation work would have begun at the top, and worked its way downwards towards the ground level. In this way, the many workers would have been able to excavate without the need for any form of scaffolding.

There is still debate over whether the Buddhist or Hindu caves were excavated first, but most historians accept that the Hindu excavations came after and were influenced by the Buddhist caves already in existence at the Ellora site. [1]

For centuries, followers of Buddhism, Jainism and Hinduism have used caves as sacred sites and temples, partly because the echo effect enhances their religious chanting.

This is not the only site where different religions coexisted; in South Asia, other sites such as My Son (Vietnam), Batu Caves (Malaysia) and Angkor Wat (Cambodia) also have joint temples shared between the Hindu and Buddhist communities. Even in this region of India, there are other nearby complexes at Ajanta and Jogeshwari. Visitors can still experience the atmosphere of these caves, as worshippers of all three of the faiths coexist in the same temple complex, just as Muslims, Jews and Christians once worshipped together in the Cordoba Mosque complex in Andalusian Spain a thousand years ago. 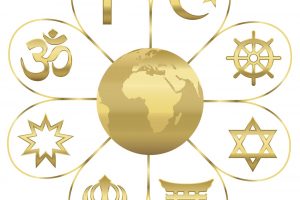