The St Thomas Cathedral is a Roman Catholic minor basilica located in the Santhome area of Chennai, in the Tamil Nadu region of southern India. It sits above the tomb of St Thomas, one of the disciples of Jesus (as) who travelled to India to spread the word and message of Jesus (as).

St Thomas is widely believed to have visited India after the crucifixion in the first century CE, having arrived in Kerala in 52 CE. The Bible mentions the mission that St Thomas was given by Jesus (as) alongside the other 12 disciples to preach to the lost sheep of the house of Israel, including in south Asia.[1]

He was dubbed ‘doubting Thomas’ because Christians believe that he didn’t accept the resurrection until he personally met Jesus (as) after the crucifixion and saw his wounds. Interestingly, even the Gospel of Thomas begins by talking of a ‘living Jesus’ and a reverence for the first church leader ‘James the Just’,[2] whereas the European Church would focus more on Paul and the resurrection.

At around that time, Jesus (as) would have been in the north of the country preaching to the Jewish diaspora, and there are traditions that Thomas met Jesus (as) and his entourage in Taxila, in northern Pakistan. St Thomas was successful in converting many people to the new faith, but also drew anger from others in Chennai, and was finally martyred whilst praying at St Thomas’ Mount near Mylapore (a southern district of modern Chennai) in 72 CE.

His body was buried in a tomb in Chennai in an area now called Santhome, and the traveller Marco Polo visited the tomb in 1292 CE. He visited with Christian and Muslim pilgrims, both of whom revered St Thomas as a holy man.[3]

Originally, a church was built over the tomb by Portuguese missionaries in 1523 CE under the auspices of King John III of Portugal, and then it was later rebuilt in its current form by the British in 1896. It is worth noting that when the Portuguese first arrived in India, they found that the local 100,000 strong Christian community followed a different Syriac tradition,[4] in their eyes, closer to Nestorianism.[5] The European settlers tried to eradicate what they considered erroneous views from the local Indian Christian community and impose their own understanding of the trinity.

The only papal visit was by Pope John Paul II in 1986. The actual relics and remains are thought to have been transferred to Europe, but the cathedral continues to be strongly associated with St Thomas and to attract many Christian pilgrims. In India, even today, 3rd July is marked as the ‘Feast of St Thomas’ by Christians.

[5] Nestorianism – a Christian doctrine in which Jesus (as) is shown to be human and which rejects the title for Mary (as) as ‘God-bearer’. 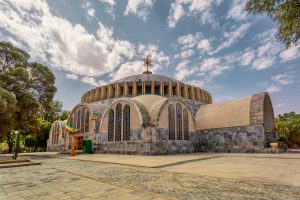