Over recent weeks the UK has been engulfed in the media storm over the phone hacking scandal that has emerged as the Achilles heel of  Rupert Murdoch’s media empire. The once untouchable media magnate has crash landed in a way that was unimaginable. With nearly 5000 phone accounts having allegedly been hacked for the sake of tabloid headlines, the darker side of journalism has touched a raw nerve with the British electorate. Worse still was the fact that the hacked accounts included families of murder victims in the UK as well as the families of our American cousins who lost loved ones in the 9/11 atrocity. The potential implications for the government and politicians are serious too – after all when a former Murdoch newspaper editor is employed by the Prime Minister as his director of communications and successive governments are seemingly guilty of attaching greater importance to media courtship than media regulation then the concerns of voters would appear to be well placed to say the least. The story is set to run with an inquiry in the offing and no doubt further revelations in store. But at least there is some action being taken and one can only hope that the findings of the inquiry are not massaged for the sake of political well-being.

The initial hearings of the parliamentary culture committee saw Murdoch facing questions during which he was unceremoniously hit by a foam pie by a disgruntled and misguided member of the public; completely unacceptable behaviour no doubt and thankfully no real harm done.

From phone hacking to another far more sinister form of hacking across the other side of the world. In February three members of the peace-loving Ahmadiyya Muslim community were attacked by a 1500 strong mob and brutally hacked to death simply on grounds of faith. The attack was captured on video that went viral on the internet and shocked the world. There was unanimous condemnation of the attack. 27 US lawmakers wrote in protest to the Indonesian president1, the EU issued a strong statement of rebuke2 and in Britain 45 Members of Parliament signed a motion condemning the attack and called on Indonesia to uphold its commitment to human rights and freedom of religion3. With the horrific video evidence there was hope that of the 1500 attackers the 12 who had been arrested would be suitably punished, but it turned out that this was just a hope. The accused were not even charged with murder and the attackers received trivial sentences of between 3 and 6 months and that for possessing an offensive weapon. The ringleader received a mere 5 month sentence despite the video evidence of him using a rock to smash the skull of one of the victims. Contrast this to the sentence given by a British court to the foam pie attacker of Murdoch who received a one month prison sentence for his dastardly crime!  Little wonder the Indonesian verdict once again put the country on the receiving end of criticism from many quarters – including some of its closest trading partners.

The contrast between the two verdicts is as striking as it is lamentable, especially when one considers that the net result of one crime is a rather expensive dry cleaning bill whereas of the other it is the shuddering appeasement of violent extremism that is killing freedom, democracy and people in far off lands.

In the Holy Qur’an Allah admonishes mankind to uphold the principles of absolute justice and states:

Verily, Allah enjoins justice, and the doing of good to others; and giving like kindred; and forbids indecency, and manifest evil, and wrongful transgression. He admonished you that you may take heed.  (Ch.16:V.91)

This principle is underlined further in the following verse:

O ye who believe! Be steadfast in the cause of Allah, bearing witness in equity; and let not a people’s enmity incite you to act otherwise than with justice. Be always just, that is nearer to righteousness. And fear Allah. Surely, Allah is aware of what you do. (Ch.5:V.9)

Indonesia’s leaders, at the helm of the world’s most populous Muslim nation, would do well to read the Qur’an, understand its meaning and act upon its noble teachings, for as the Quran clearly notes ‘Allah is well aware of what you do.’ 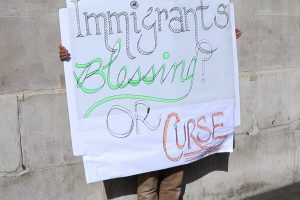 The Natural System of Justice and Balance
Is Islam for Germany?
Comment