The Review of Religions is pleased to begin our serialisation of the first ever full English Translation of At-Tafsīr-ul-Kabīr – The Grand Exegesis. This is the magnum opus of Hazrat Mirza Bashiruddin Mahmud Ahmadra, Second Worldwide Head of the Ahmadiyya Muslim Community. This is one of the most insightful and  in-depth commentaries of the Holy Qur’an ever written, brought to English readers for the first time.

[The Word of God]

This book has remained perfectly true to its original state from the moment of its revelation until today. Not a single word from the Qur’an has been removed, nor added; no commandment of it is impractical; no verse has been abrogated, and every single vowel of the Qur’an has been preserved. The pronunciation of the Qur’an remains completely unchanged. Therefore, there is no other scripture apart from the Qur’an, which, containing the above qualities, can serve as a beacon of light by virtue of its commandments being free from ambiguity. But regrettably, Muslims have abandoned this precious book, forsaking it for others. Instead of following God Almighty, they follow their self-proclaimed leaders.

I have written this exegesis of the Word of God with the hope that those who are unfamiliar with the Arabic language, or those who, unfortunately, do not have the time nor the desire to reflect over it, should be given a chance to understand the Word of God and become aware of its inner beauties and excellences.

With these brief introductory words, I begin the first volume of this exegesis. Three other volumes which are an exposition of the middle and last parts of the Qur’an have already been published. May Allah the Almighty accept this humble effort of mine and may He, through this exegesis, manifest the apparent and hidden meanings of the Holy Qur’an once more. May Allah enable me to complete this exegesis. Āmīn.

1. In the name of Allah, the Most Gracious, the Ever Merciful. We praise Him and invoke blessings upon his Noble Messenger. [Publishers]

2. The phrases بِسْمِ اللهِ  (bismillāh) and وَالنَّاسِ (wan-Nās) constitute the first and last words of the Holy Qur’an, respectively. [Publishers] 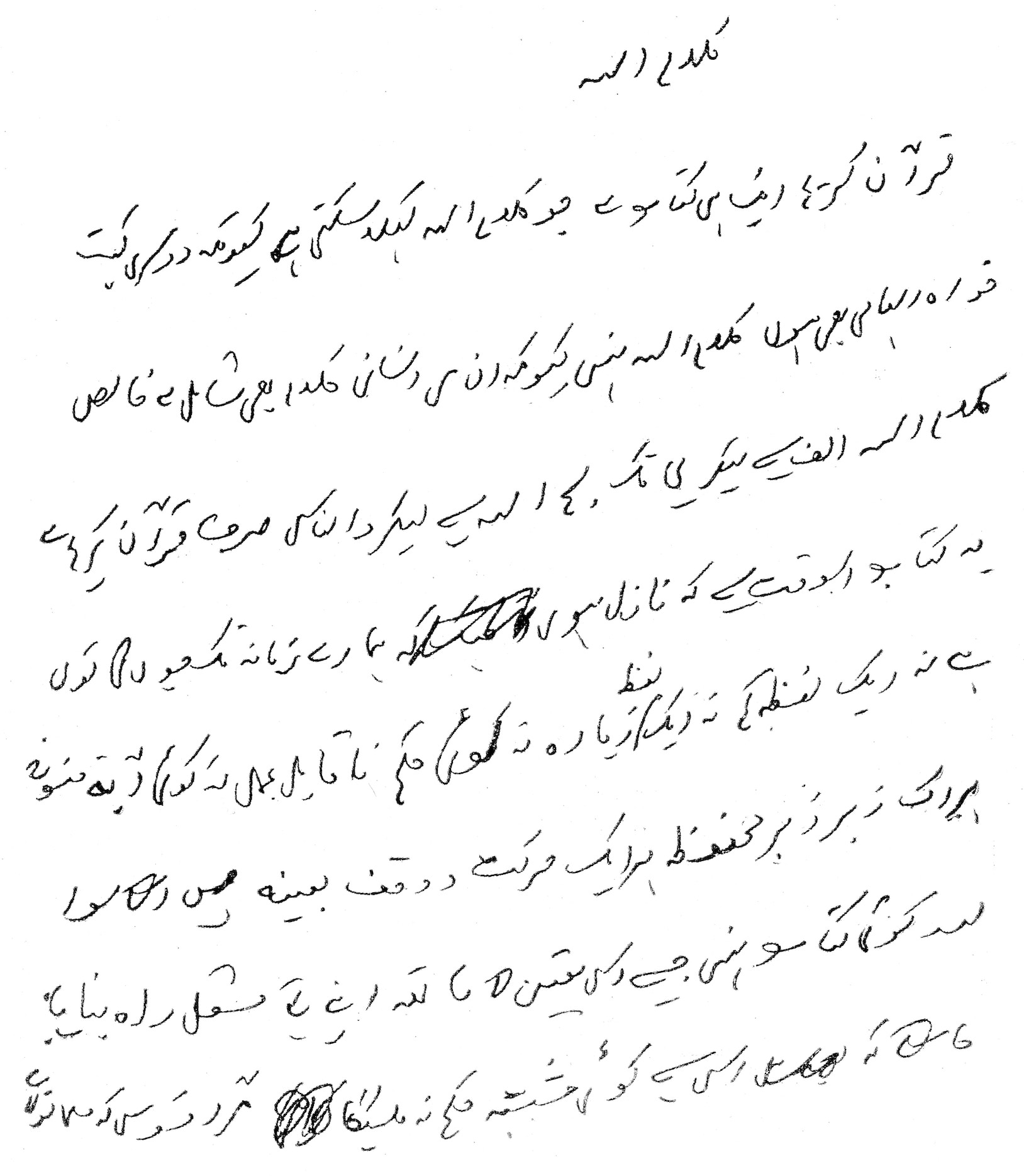 Sūrah al-Fātihah is Makkan3 and, with the inclusion of bismillāh4, consists of seven verses (1)

(1) سورةsūrah: In the Arabic language, the word sūrah has the following meanings:

1. مَنْزِلَةٌ manzilah – rank or station.
2. شَرَفٌ sharaf – eminence or nobility.
3. عَلَامَةٌ ‘alāmah – a mark or sign.
4. A tall, beautiful wall or edifice.5
5. This word may also be derived from سؤرة su’rah. In other words, it contains the letter ء hamzah which changes to the letterو wāw due to it being preceded by a letter with a dammah6. The word سؤرة su’rah means a remainder of a thing. Arabs use the expression: هُوَ فِي أَسْأَرِ النَّاسِ. That is to say, he is from among the people who remained behind.
6. Something that is whole and complete. Arabs call a young healthy she-camel sūrah7.
The plural of سُورَة sūrah is سُوَر suwar, that is to say sūrahs.
As for why some portions of the Holy Qur’an are called sūrahs, a number of scholars have provided different explanations: some believe that it is because when one reads a sūrah of the Holy Qur’an their status is elevated. According to others, nobility is acquired by means of it. Some opine that a sūrah marks the end of a subject under discussion, whereas others are of the view that this word signifies a tall, beautiful and spiritual edifice. Furthermore, some believe that they [i.e. sūrahs] constitute a part of the entire Qur’an, and others suggest that sūrahs cover a whole and complete subject-matter.
Clearly, these differences stem solely from varying personal opinions; otherwise, all six meanings of the word sūrah mentioned above apply here. Therefore, we may assert that specific portions of the Holy Qur’an are called sūrahs for: (1) they are a part of the Holy Qur’an; (2) each and every one of them discusses an entire subject-matter; (3) they contain tall and beautiful spiritual buildings by entering which one attains (4) a high status and (5) nobility; (6) a unique distinction over other people is acquired by those who act according to them.

The word sūrah which has been used in relation to specific portions of the Holy Qur’an is a name revealed by God and has also been mentioned by the Holy Prophetsa. The Holy Qur’an states:

‘A sūrah has just been revealed to me.’ The Prophetsa then recited: ‘In the name of Allah, the Most Gracious, the Ever Merciful. Surely We have given thee abundance of good9 …’10

It is evident from this narration that the portions of the Holy Qur’an Muslims today call sūrahs were also called sūrahs by the Holy Prophetsa, i.e., it was not a term that was assigned afterwards.

The Holy Qur’an begins with a brief sūrah named Fātihatul-Kitāb [the Opening Chapter of the Book], the name of which was shortened to Sūratul-Fātihah. Urdu speakers subsequently rendered it Sūrah-e-Fātihah according to the dictates of Persian idiom. This name has also been narrated by the Holy Prophetsa in Tirmidhi:

This sūrah has several names, the most common of which, as confirmed by the Holy Qur’an and the words of the Holy Prophetsa, are given below:

(1) Sūrah as-Salāh [The Chapter of Prayer]

Abū Hurairahra reports that the Holy Prophetsa said that Allah the Almighty states:

Ibn Jarīr has also cited this same narration on the authority of Jābir bin ‘Abdullāhra13: ‘I have divided the prayer (i.e. Sūrah al-Fātihah) in two halves between Me and My servant.’ That is to say, in the first half [of this Chapter], divine attributes are mentioned, while the second half consists of prayers for the servant [i.e. the one who supplicates].

(2) Sūrah al-Hamd [The Chapter of Praise]

In Abū Dawūd, it is narrated by Ḥaḍrat Abū Hurairahra that the Holy Prophetsa stated:

This sūrah is also referred to by the above three names. There is a narration from Abū Hurairahra in Musnad Ahmad bin Hanbal, where the Holy Prophetsa said:

‘Sūrah al-Fātihah is also the Mother of the Qur’an, the Seven Oft-Repeated Verses and is also the Great Qur’an.’

The expression ‘The Seven Oft-Repeated Verses’ has also been used in the Holy Qur’an. Allah states:

Thus, this epithet has been used by the Holy Qur’an itself.

(6) Ummul-Kitāb [The Mother of the Book]

This name has also been recorded in Abū Dawūd with reference to a narration of Abū Hurairahra, mentioned above in point number (2).

This name is cited on the authority of Hadrat Abū Sa‘īd al-Khudrīra who narrated that the Holy Prophetsa said:

‘Sūrah al-Fātihah is a cure for every disease.’

This name has also been cited by Hadrat Abū Sa’īd al-Khudrīra in Musnad Ahmad bin Hanbal and Sahih Bukhari:91

‘Somebody mentioned to the Holy Prophetsa that a man was bitten by a snake and he recited Sūrah al-Fātihah as an incantation and the man was subsequently cured.’ Upon this, the Holy Prophetsa asked, مَا يُدْرِيكَ أَنَّهَا رُقْيَةٌ [How did you come to know that this sūrah could be used as a charm?]. The companion replied, ‘O Messenger of Allah, this thought just arose in my heart.’
(9) Sūrah al–Kanz [The Chapter of Treasure]

‘Among the blessings bestowed unto me through the favours of Allah is Fātihatul-Kitāb. Allah informed me that this is a treasure from among the treasures of My throne.’21

Earlier, I mentioned al-Fātihah as one of the names of this sūrah. Hence, these nine names have been established from the Holy Qur’an and the Hadith. Besides these names for this sūrah, the companions of the Holy Prophetsa have also narrated others.

Imam as-Suyutīrh has recorded 25 names of Sūrah al-Fātihah. ‘Allāmah al-Qurtubī has recorded twelve names. However, since I was unable to find proof from the Qur’an and Hadith regarding these other names, I have not cited them here.

The exclusive serialisation of The Grand Exegesis continues in the next edition.

Endnotes
1. I seek refuge with Allah from Satan, the accursed. In the name of Allah, the Most Gracious, Ever Merciful.  We praise Him and invoke blessings upon His noble Messenger. [Publishers]

2. By the Grace and Mercy of God; He is the Helper. [Publishers]

3. Makkan sūrahs refer to those sūrahs that were revealed prior to the Hijrah, the migration of the Holy Prophetsa and his companionsra from Makkah to Madinah. [Publishers]

4. The verse بِسْمِ اللهِ الرَّحْمَنِ الرَّحِيمِ is often abbreviated as بَسْمَلَة basmalah or referred to by its incipit بِسْمِ الله bismillāh. The latter will be used throughout. [Publishers]

6. The dammah (ـُ) is a hook-like diacritical mark placed above a letter to represent the short vowel /u/ (like the “u” in “put”).

18. Al-Ruqyah means to blow one’s breath on a sick person after praying for him or her. [Publishers]

The Grand Exegesis: An Epoch in the History of the Holy Qur’an
Impressions of Hazrat Mirza Bashiruddin Mahmud Ahmad(ra) the Promised Reformer
Comment