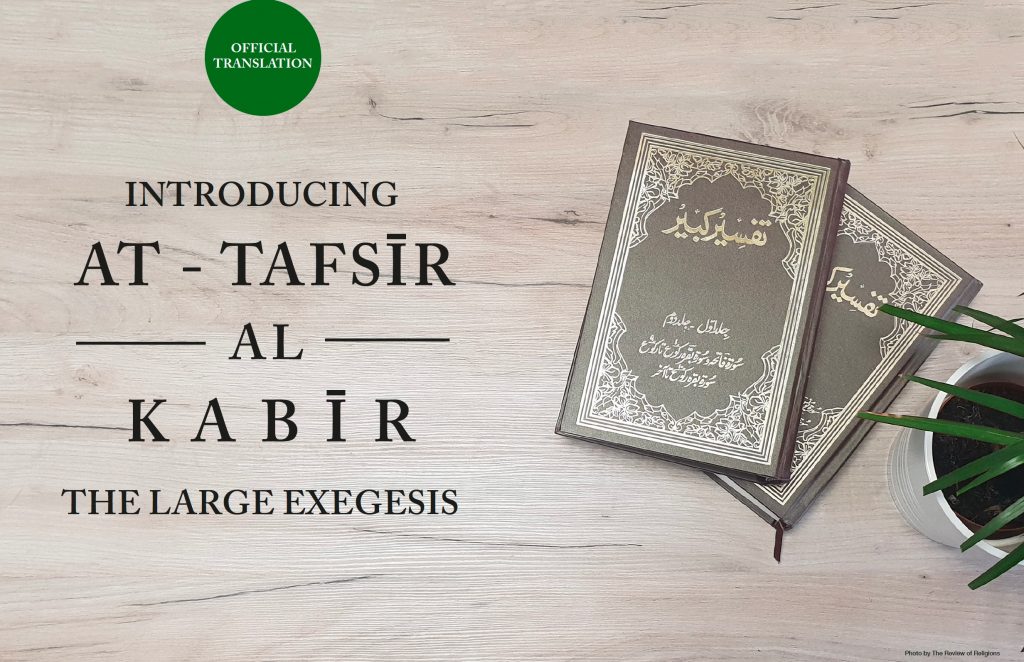 In an age where Islam has been criticised for inciting violence at worst, and for being behind the times at best, it seems that both critics of Islam and Muslims themselves have used the text of the Holy Qur’an, in some cases gravely misinterpreting this scripture and the true teachings of Islam.

Enter At-Tafsir Al-Kabir or the Large Exegesis, which delves deeply into the Holy Qu’ran, incorporating a wide variety of disciplines and modern knowledge of science and linguistics to satisfy the deepest of scholars. Written by the second worldwide head of the Ahmadiyya Muslim Community, Hazrat Mirza Bashiruddin Mahmud Ahmadra, the book is especially significant as it was penned by ‘The Promised Son’ of the Promised Messiahas himself.

Known to millions across the world as ‘Musleh Ma’ud’, or the Promised Reformer, Hazrat Mirza Bashiruddin Mahmud Ahmadra was the son of the Promised Messiahas, who, before his birth, prophesied that he would have a son who would have the following characteristics: ‘He is the Word of Allah, for Allah’s mercy and honour have equipped him with the Word of Majesty. He will be extremely intelligent and understanding and will be meek of heart and will be filled with secular and spiritual knowledge’.  Throughout his 52 years as Khalifatul Masih (Caliph), he amply proved the truth of this prophecy.

And, in fact, the scope and depth of At-Tafsir Al-Kabir testifies to the truth of this prophecy. Based on the notes of the author’s in-depth lectures on the Holy Qur’an delivered across India and Pakistan in the cities of Qadian, Rabwah, Dalhousie and Quetta, this commentary was the first of its kind to provide a fresh explanation of the verses of the Holy Qur’an in light of modern-day knowledge and discovery.  Hazrat Khalifatul Masih IIra mesmerises readers by synthesising and integrating insights from multiple disciplines including theology, jurisprudence, politics, history, anthropology, philosophy, geography, sociology, and lexicography, demonstrating his vast knowledge and understanding of both hidden and temporal realities. His work is not merely an addition to the classical commentaries; rather, it offers a novel approach to the study of exegetical commentaries and the science of comparative religions, paving a new way in this field of research.

His Holiness recounts that he was taught the meanings of the verses and chapters of the Holy Qur’an by God Almighty Himself, through direct revelations, dreams and divine inspirations.  Aspects covered include the unique order in which the Holy Qur’an’s chapters are arranged, the inter-relation of every verse and chapter; the connection of the different themes with one another; and the fact that every word has been purposefully arranged in a most precise, logical and perfect manner. The commentary also makes eschatological references such as the suggestion that the chapter Al-Kahf and the latter chapters of the Holy Qur’an relate to the present time.  It mentions the objections of orientalists and missionaries to certain Qur’anic verses and then refutes them all powerfully. He also sheds light on certain critics’ ignorance of Arabic linguistics as well as their underlying biases or prejudices that may cloud their judgements.

However, Hazrat Musleh Ma’udra does not dismiss the indefensible errors committed by some eminent Muslim exegetes and theologians either. For instance, he provides a powerful rebuttal to the absurd theory of abrogation they attribute to the Holy Qur’an. He also unravels the many conundrums caused by some Muslim theologians who have inserted into their commentaries such traditions quoting the Holy Prophet Muhammadsa which are from fabricated and questionable sources. Indeed, Hazrat Musleh Ma’udra says that their insertion into exegetical work made the Holy Qur’an become an object of heavy criticism. He deals with this sensitive issue in such a manner that absolves the Holy Qur’an from the objections of the non-Muslim critics.  Furthermore, he expands on the principle that one portion of the Holy Qur’an serves as an explanation for the other and that, in order to understand one verse, it is crucial for the reader to reflect upon the meanings given in another verse relating to the same topic. Studying the verses in light of the sayings of the Holy Prophetsa and the writings of the Promised Messiahas  opens the doors to acquiring the treasures of the verities of the Holy Qur’an.

The ten volumes of At-Tafsir Al-Kabir were written over a period of around 20 years, spanning approximately 6000 pages in the Urdu language. Even then, this exegesis does not cover all chapters of the Holy Qur’an; At-Tafsir Al-Kabir includes the chapters from  Surah Al-Fatihah to Surah Al-Baqarah (the first two chapters), then from Surah Yunus to Surah Al-Ankabut (chapters 10-29) and then with a gap in publication, it covers Surah Al-Naba’ to Surah Al-Nas (chapters 78-114). The current Urdu font size in these volumes is quite small but if a more conventional  font size is used then these pages might even  exceed 10,000 to 12,000 pages!

While some portions of this outstanding exegesis have been abridged and translated into English as a five-volume commentary entitled, The Holy Qur’an with English Translation and Commentary, there has never been a complete English translation of At-Tafsir Al-Kabir.

The Review of Religions is pleased to announce the exclusive serialisation of this important commentary in our pages over the next few months. We will start next month with Hazrat Musleh Ma’ud’sra own introduction to this work, and then begin with the very first chapter, Surah Al-Fatihah.

We invite readers to dive into the depths of this ocean of knowledge and explore the limitless treasures of pearls and gems of Qur’anic wisdom. While no commentary can ever encompass the final interpretation of the Holy Qur’an, this exegesis has certainly set the standard by which all future commentaries ought to be judged.