France is a country that needs little introduction. It is a nation famous for its delicious bakery items such as croissants. The world’s most visited paid landmark is in Paris – the iconic Eiffel Tower. History books are filled with details of the lives of legendary French leaders, such as Joan of Arc, Napoleon Bonaparte, and Marie Antoinette.  Indeed, it was the writings of French philosophers such as Voltaire and Descartes that helped shape Western philosophical ideals. While the impact of French culture is clearly global, the social fabric of France today has entirely changed from what it once was.

For more than 1000 years, France was one of the primary Christian countries of Europe. It was a powerhouse of Catholicism, and later Protestantism. However 1905 saw a momentous law being passed, enacting the separation of church and state. As a result, France became a ‘secular’ state.

Today Christianity in France is no longer practiced as it once was. Strange then, that statistics tell us that 45% of French people still consider themselves Christians. On the surface, a large proportion of the population still identify with Christianity. However deeper probing paints an altogether different picture to these figures. The attendance at churches in France is amongst the lowest anywhere in the world. One survey reports that only 5% of the population attend weekly mass. Whilst many may identify as Christians, it would be only in name. By all accounts, secularism is now firmly established as the defining characteristic of France. As an example, in education, religious topics are considered taboo. The veil is now banned in public places and for Muslim girls the hijab in schools. Other religious symbols are also banned in public primary and secondary schools such as Sikh turbans and Jewish kippah.

And so it was to the French Republic where the fifth Caliph of the Ahmadiyya Muslim Community, Hazrat Mirza Masroor Ahmad (aba) arrived on Wednesday evening in Trie-Château Gisors. The Caliph will address the three-day Jalsa Salana (annual convention) of the Ahmadiyya Muslim Community France this weekend, inaugurate the Community’s new mosque in Strasbourg and address a UNESCO function in Paris. The Caliph, who is the leader of tens of millions of Ahmadi Muslims, will deliver the message that religion is still relevant in the world and God speaks to us today, as He always has.

The Eiffel Tower was inaugurated in 1889 and has become a symbol of the Western world. In the same year, the Ahmadiyya Community was founded by Hazrat Mizra Ghulam Ahmad (as) in Qadian, India, who claimed to be the Promised Messiah and Imam Mahdi, destined to restore Islam’s true teachings and unite all people of the world. At the time he was alone in his mission but his community has now grown to over 200 countries of the world. After his demise, a spiritual system of Caliphate was divinely established to continue his mission.

The fifth Caliph of the Ahmadiyya Community comes to France from the Netherlands, where he has just completed a week-long visit, leaving Wednesday morning shortly after 11am, and arriving in France at around 6:30pm. While in the Netherlands, the Caliph had said at the opening of a new mosque in Almere:

‘In today’s world, critics are quick to blame religion and particularly Islam, for the problems of the world. Yet, many people who are suffering from inner torment and unrest are those who live a purely secular existence and so their problems cannot be blamed on Islam or any other religion. As a religious leader, I firmly believe that instead of being the cause of today’s problems, religion is the answer and from an Islamic perspective, the solution is quite simple. The Prophet of Islam (sa) taught that true peace of mind requires for a person to recognise God Almighty and to develop a connection with Him because, according to Islam, one of the attributes of God Almighty is that He is the ‘Source of Peace’. He desires for His creation to live peacefully, irrespective of any differences of religion or belief. Furthermore, the Holy Prophet Muhammad (sa) taught that Allah the Almighty is the provider and sustainer of all creation. He does not just provide for Muslims, but His grace encompasses all humanity, be they Christians, Hindus, Sikhs, Jews or the people of other faiths and beliefs and indeed of those who have no faith and deny His existence.”

In Trocadéro, in central Paris, I spent the afternoon with Asif Arif, an advocate who runs his own law firm. Asif is French-born and is the Secretary for External Affairs for the Ahmadiyya Muslim Community in France. He is one of the key organisers for the events with external guests that the Caliph will be addressing. As I arrived for our pre-arranged meeting, I pressed the buzzer outside Asif’s office but received no reply. A short while later I saw Asif running from the street around the corner carrying a bag in his hand and exclaimed, ‘I thought I would bring some typical French breakfast for you, I hope you’ll like it!’ I followed Asif up the stairs and he took me into his office where, over a breakfast of croissants and baguettes, we discussed the upcoming tour of the Caliph. I asked Asif how he felt the French public would react to the Caliph’s visit:

‘They will be initially shocked’, he said. ‘Normally when people in France think of the word “caliphate” it has a negative connotation in their minds. Certain other Muslim leaders here have developed poor reputations. However, the Caliph of the Ahmadiyya Muslim Community, Hazrat Mirza Masroor Ahmad (aba) is totally different from the rest. He is spiritually and divinely guided and his presence is strongly needed here to hear another voice of Islam, the voice of the successor of the Promised Messiah (as) and Imam Mahdi who came to restore Islam’s true teachings. Apart from the others who will benefit such as Christians and people of no religion, Muslims will be the first recipients of his message.’

The last part of Asif’s answer is particularly intriguing. France has Europe’s largest Muslim population. Estimates vary but a Pew Research report puts it at just under 9% of France’s 66 million population as Muslims. There are a large number of immigrants, particularly from North Africa, to France and currently, there are over 2000 mosques in the country. There has been a small minority of Muslims who have committed wrongful acts which has led to a negative perception about Muslims as a whole developing. Asif continued by telling me:

‘When I speak to Christians they tell me [that] the problem with you Muslims here in France is that you do not have one leader, like the Pope, to unite you all. But I say we do have one spiritual leader, the Caliph of the Promised Messiah (as) (Khalifatul Masih). Particularly with regards to Islamophobia, the Caliph will show the true message of Islam. He is the spiritual leader who can change the perception of Muslims.’

Nearby I had my next appointment near the world-famous Champs-Elysées. I was meeting Usman who is originally from Mali and is a member of the Ahmadiyya Muslim Community. He was previously president of MKA France, the Ahmadiyya Community’s Youth Association and is now President of PAAMA France, the Pan-African Ahmadiyya Muslim Association. He works in marketing in Levi Strauss in Paris. As I entered the Levi Strauss offices with Usman and walked through the building, I noticed along the wall every type of jeans. Through the corridors, staff were rushing around discussing the latest fashionwear designs and concepts.

Usman took me into a large meeting room where we sat together over a coffee. I showed Usman one of our latest videos from our The Review of Religions YouTube channel called, ‘I am a Muslim, Listen to my song!’ In it, a colleague travels around the USA reciting the call to prayer, known as the ‘Azan’ and which includes the words ‘Allahu Akbar’ or God is the greatest, sung in a very melodious voice. Almost everyone who hears it, from California to New York, is awe-struck and some even responded that they felt ‘spiritual’ listening to it. Usman was constantly smiling watching the video and so I asked him his feedback. ‘If you tried the same thing here’, Usman said ‘you would be arrested immediately! The culture is very different here. People have different perceptions of religion. Here for example, I will never begin a conversation about religion with anyone; rather when people ask me then I fully inform them and then I do get a chance to clear up misconceptions. Otherwise they don’t seem to have much interest.’

Even more fascinating therefore is the anticipation of the Caliph’s visit to France. In a country which seems to firmly reject public displays of religion, what message will he bring and what reaction will it garner?

Stay updated with The Review of Religions during the tour of the Caliph in France.

About the Author: Syed Amer Safir is the Chief Editor & Manager of The Review of Religions 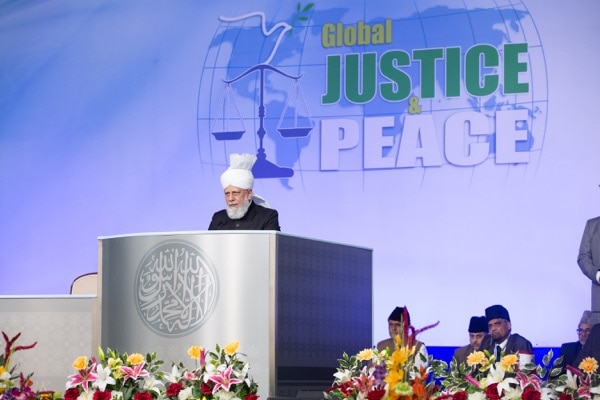 Testimony of Witnessing the Blessings of Khilafat 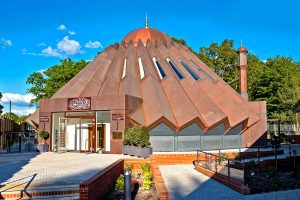 Friday Sermon Summary 28th May 2021: ‘Turning Fear into Peace – The Establishment of Khilafat and its Blessings’ 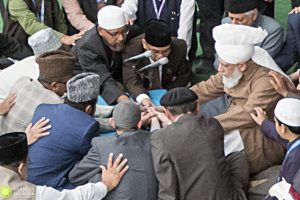 Khilafat: The Beating Heart of Love and Truth