My first introduction to the claims and teachings of Hazrat Mirza Ghulam Ahmad(as) of Qadian was in 1970, in Birmingham, in the Midlands of UK. This was over 80 years after the Promised Messiah(as) first announced his claim and more than 4000 miles west of his birthplace in Qadian, Northern India.  I was in Birmingham as a primary school teacher, teaching in the multicultural suburb of Handsworth.

During my childhood and adolescence much of my social activity was connected to my local Baptist Church. I had been a Brownie, a Girl Guide and a member of the Girls Brigade. I believed in God, worshipped as a Christian and learned traditional Bible stories. It was something that interested me.  I chose to study Religious Education at school and at college.

My father had been to India as a soldier in the second Word War. We had Indian artefacts in our house. His father, my grandfather had been to South Africa in the Boer War. I never experienced or saw any prejudice or resentment of foreigners in our  house.  I think my family were very open-minded and interested in others.

I came to hear of the claims of the Promised Messiah through a colleague of my husband, both who taught in primary school in Handsworth.  Mr. Matteullah Dard found us interested in history and in religion so we were receptive to his discussions, especially about the difference between Christianity and Islam. I had been introduced to Islam at college in my Religious Education course.  This course just presented us with the basics of the beliefs and some of the practices of Islam. The course was taught by a Christian clergyman so did not convey anything of the spirituality of Islam.

Listening to the discussions and joining in with questions and comments about the history of Jesus Christ(as) was stimulating to me.  In spite of my Christian background when I was presented with the teachings of the Promised Messiah(as) I realised how little I knew.  The claims of Mirza Ghulam Ahmad(as) to be the Second Coming of Jesus Christ(as) was fascinating.

The book ‘Jesus in India’ written by the Promised Messiahasopened up enormous doors of new thought and explorations.  As a student of Roman and Greek history with an exceptional memory for what he has read my husband began to explore evidence for Jesus’(as) journey from Jerusalem to Kashmir.  This became a lifetime study for him and a lifetime interest for me.

The explanation that Mirza Ghulam Ahmad(as) gave about events surrounding the crucifixion of Jesus Christ(as) required closer reading of the Bible.  The Promised Messiah’s(as) description of what happened to Jesus(as) after the crucifixion inspired us to study Roman historical records; Jewish and old Christian records, including the recently released translations of ‘The Dead Sea Scrolls’; the Apocrypha and the development of religious thought around the region at the time.

Even more engaging was the alternative narrative the Promised Messiah(as) gave of the events of the life of Jesus Christ(as), the detailed study of Jesus(as) arrest, trial and crucifixion. It became like a detective story for us.  Reading the Bible carefully, in closer detail, looking into Roman traditions and histories; thinking about how normal people behaved it was amazing to see a long accepted story from another point of view. So much of this point of view made sense. It was logical, reasonable. It did not require supernatural events. It felt as if the last piece of a puzzle had been found and the picture was now complete.

Reading more books produced by the Ahmadiyya Muslim Community, especially those translated or written by Chaudhary Muhammad Zafrulla Khan re-engaged me with thinking about God and my own relationship with God.

All the books I read, especially those written by Mirza Ghulam Ahmad, the Promised Messiah(as) increased my interest. ‘The Blessings of Prayer’, ‘Noah’s Ark’,  ‘A Review of Christianity’, ‘Questions by a Christian’(several books) ‘A Misunderstanding Removed’ all seemed so reasonable.

The time came when I felt a need to confirm what I was feeling about the claims of the Promised Messiah(as) and his teachings.

I decided it had to be God who would be able to guide me so I began to pray.  I remember trying to pray in a way like the Islamic prayer for guidance and my own need.  I said to God, ‘this all seems reasonable and sensible to me but You know the truth and You can guide me rightly. Please make it clear to me if this is the truth’.

I prayed like this for some time, maybe a couple of weeks, asking for clarity. My prayers were answered.  Not by dreams or visions but by a convincing, strong certainty that the claims and teachings of Mirza Ghulam Ahmad, the Promised Messiah(as) are true. That certainty has never, ever left me no matter what my condition, and everything I have experienced in over 50 years has re-enforced that conviction.

I have visited Makkah and Madinah, I have visited Qadian and Rabwah.  I have journeyed through Israel and visited places connected with Jesus Christ(as).  I have met Muslims of all sects on my journeys.  I have lived in many different communities in UK and abroad. Everywhere I have experienced the support of God for the Promised Messiahasand his community.  I have no doubt that the claims of the Promised Messiah(as) to be the Second Coming of Jesus Christ(as) and the appointed prophet of God in these times is true. Real personal and social peace comes from being part of his community, following his teachings and developing a relationship with God and His Khalifah.

Although is is only a part of the teachings of the Promised Messiah(as) I do believe that his explanation of the true account of Jesus Christ(as) , his life and fulfilment of his role as Messiah can be the means to unite Jews, Muslims and Christians since it is the status of Jesus(as) that divides them.

In the Words of the Promised Messiah (as): Prayers for the Attendees of the Annual Convention 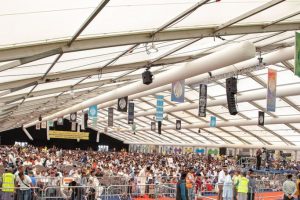 In the Words of the Promised Messiah (as): The Primary Purpose of the Annual Convention

Give Heed to the Voice of Heavens! The Messiah Has Come
My Conversion Story from Judaism to Islam Ahmadiyyat
Comment