It certainly is a sight to behold: a sea of people gather in what seems to be synchronised harmony, circulating around a simple, yet majestic cube-shaped structure which serves as the epicenter towards which point the compasses of billions around the world. This of course is the sight at the time of Hajj, the Muslim pilgrimage to the Holy city of Mecca, wherein lies the principal symbol for the Unity of God: the Holy Ka’bah. After the holy pilgrimage comes Eid-ul-Adha, the Festival of Sacrifice, often commemorated with the sacrifice of an animal. This time of year certainly heralds great joy and spiritual zeal for Muslims all across the world; it is also a time predicated upon various outwards expressions, such as performing circuits around the Holy Ka’bah, kissing the Black Stone and sacrificing animals among various other rites.

But what is the reason for such outward expressions? Afterall, Islam promotes the development of spirituality within; cleansing and purifying the soul which is all that will remain of our beings in the afterlife – the ultimate goal.

Islam Recognizes the Bond Between the Physical and the Spiritual

It’s true, Islam does promote the purification of the soul and the attainment of righteousness. God Almighty stipulates in the Holy Qur’an that the most honourable in the sight of God are the righteous [1], not those with any sort of physical or outward superiority. But Islam also does not disregard the natural bond between the physical and the spiritual; a bond which must be recognised in order to achieve inner purity and righteousness. As the Promised Messiah and founder of the Ahmadiyya Muslim Community, Hazrat Mirza Ghulam Ahmad (as) points out, ‘Islam is inherent in man’s nature and man has been created in accord with Islam.’ [2]

Thus, the Islamic way is in complete concordance with human nature. What is the human nature? It is such, that when a person cries, even if the tears are artificial, a feeling of sorrow comes about within. Similarly, if a person laughs, no matter how artificial it may be, there comes a point when it results in the fruition of inner joy. As the Promised Messiah (as) puts it, ‘Physical conditions deeply affect the soul.’ [3] This incontrovertible reality is something which Islam has acknowledged from the very outset, thus has Islam incorporated certain physical aspects in order to aid spiritual progress.

Take for example, the Muslim prayer – an expression of meekness and humility, and the greatest means for inner purification. It requires no physical objects, no visuals to look at while praying; it is a matter of simply being one with God. Yet there are physical aspects in order to comprehend and enhance the spiritual experience.

One of the components of Islamic prayer is the ablution, performed before every prayer. Though the ensuing prayer is entirely spiritual, the underlying impact of physical purity upon spiritual purity is vital. Thus, God Almighty expresses his love for those who maintain both outer, and inner purity [5]. As the Promised Messiah (as) explains, ‘Anyone who desires to develop an inner state of purity must also be physically clean as well.’ [6]

Physical and Spiritual States in Prayer

As for the prayer itself, one may see the various positions and prostrations as mere ritual, but the reality is that each and every movement and action has been ordained with meticulous precision in order to foster and reflect the desired spiritual state at that very moment.

For example, the prayer begins with the declaration, ‘All praise belongs to Allah, Lord of all the worlds,’ and one continues glorifying God and His majesty. At this juncture, one stands upright, with their arms folded in front. It is a sign of respect to stand upright in the presence of higher majesty. Furthermore, when praising God, attesting to Him being the absolute greatest, possessor of all power and only one worthy of all praise, one must be entirely resolute and stand firm in this conviction. Thus, one physically stands upright, symbolising the spiritual fortitude and resolve in one’s belief in God. Subsequently, as the Promised Messiah (as) explains, ‘When this is clearly established in the heart, it is known as spiritual Qiyam [standing].’ Thus, ‘Not only does the body stand but the soul stands as well.’ [7]

Then, one prostrates while saying, ‘Holy is my Lord, the most Great’. Upon realising awesome might, grandeur and power, the natural inclination is to bow. Simply, ‘Greatness constitutes bowing.’ Thus, ‘Not only does this person acknowledge His greatness, but he also bows as too does his soul.’ [8]

Then, one falls prostrate on the ground, saying ‘Holy is my Lord, the most High.’ It is as if one cannot help but fall upon the threshold of the sheer Majesty he has just realised. But not only does the body prostrate, rather, ‘Upon realising His majesty, the soul has also fallen upon the Divine threshold.’ [9]

Essence of the Rites of Hajj

The rites of Hajj, such as circling around the Holy Ka’bah, or kissing the Black Stone believed to have been sent by God, is no different. Hajj, in its essence, is an expression of extreme love. In the realm of love, one almost helplessly finds their heart and soul revolving around their beloved and would kiss even their threshold. Thus has the Holy Ka’bah been made a symbol for the true lovers of God, and the Black Stone symbolises the threshold of God. The Promised Messiah (as) beautifully describes:

‘This commandment has been given so that one may physically express their fervent love and affection…this physical fervor brings about a spiritual warmth and love; so while the body circulates around this House and kisses the cornerstone of [His] threshold, at the same time, the spirit revolves around the true Beloved and kisses His spiritual threshold.’ [10]

Imagine receiving a letter from someone very dear. Upon reading it, one brims with emotion and kisses the letter, however the object of this expression of affection is not the paper itself, rather whom it represents. It is the inner feelings which evoke such an act, or the act which enhances the inner feelings.

Thus is the philosophy behind circling around the Ka’bah and kissing the Black Stone. As mere physical objects, they hold no superior value; their value lies only in that which they represent. This concept is perfectly encapsulated in the words of the Second Caliph of Islam, Hazrat Umar (ra), who, after kissing the Black Stone said, ‘I know you are a stone and can neither benefit nor harm anyone. Had I not seen the Messenger of Allah (sa) kissing you, I would not have kissed you.’ [11]

The Festival of Sacrifice: A Deeper Meaning

Having understood the principle of synergy between the physical and spiritual, it only makes sense that the same would apply to the sacrificing of animals, especially on the occasion of Eid-ul-Adha, which commemorates the exemplary sacrifices made by Abraham (as) and his son Ishmael (as). As it pertains to sacrifices, God Almighty explicitly states, ‘Their flesh reaches not Allah, nor does their blood, but it is your righteousness that reaches Him’ [12]. This statement is unequivocal; just as the primary purport for Abraham (as) was not the sacrifice itself, but his obedience to God, so too is the purpose of emulating his sacrifice. It is not to merely mirror the physical act, but to adopt the same spirit of righteousness.

This concept is remarkably explained by the Fifth Caliph and Worldwide Head of the Ahmadiyya Muslim Community, His Holiness, Hazrat Mirza Masroor Ahmad (aba):

‘These apparent sacrifices are to give a jolt to our souls, to explain that just as this lesser being has been sacrificed for you, so too is it the mark of a true believer to always remain ready for any sacrifice in acting upon the commandments of God Almighty. Prepare your body and your soul for sacrifice. Increase in your level of righteousness.’ [13]

Thousands, if not millions of animals are slaughtered every day, and so, merely sacrificing an animal in itself holds no esteemed value. However, when the sacrifice is carried out with a greater purpose, a higher intention, with righteousness as the primary goal, then the physical act of sacrifice becomes a symbol of great importance. Thus, the physical act is to serve as a reminder, a lesson to show how we as lesser beings must always be ready to sacrifice for the ultimate Being. Then will our righteousness, not the flesh of the sacrifice, reach God.

It is in this way that Islam has catered to the human nature; a nature which relies on the physical to impact the spiritual, and a nature in which the spiritual impacts the physical. For a true believer, an action is never merely an action, but each and every action is a vessel for the attainment of spiritual heights, for the attainment of righteousness; a vessel to reach God. 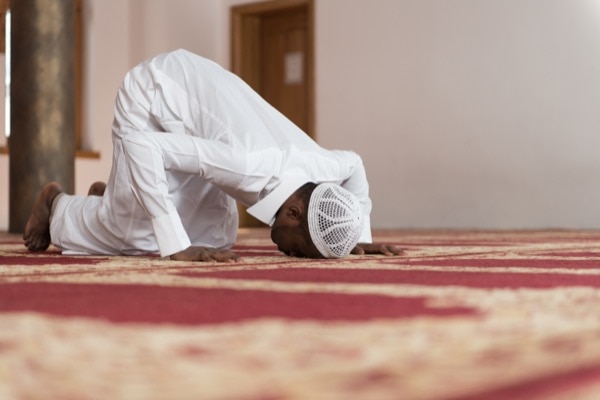 Prayer and Service to the Faith

The Philosophy of Eid-ul-Fitr

Eid-ul-Adha Sermon Summary 31st July 2020: Establishing the True Spirit of Sacrifice
Ramadan is over- so what about fasting now? A religious perspective
Comment