A Chapter from the Early History of Islam

(Causes of dissension among the early Muslims)

The January 1921 edition of The Review of Religions was full of scholarly and faith-inspiring articles. The first article of the January issue was the translation of an address given by His Holiness, Hazrat Mirza Bashir-ud-Din Mahmud Ahmad (ra), the second Successor of the Promised Messiah (as), to the Martin Historical Society at the Islamia College Hall Lahore on 26th February 1919. It was an extremely significant lecture because it dealt with a particularly important era in the history of Islam. This address eloquently explained the causes of conflict and dissension amongst early Muslims. Hazrat Mirza Bashiruddin Mahmud Ahmad (ra) provided a correct and accurate historical account of the conflicts which arose amongst early Muslims after the demise of the Holy Prophet (sa). Hazrat Mirza Bashir-ud-Din Mahmud Ahmad (ra) refuted various allegations levelled against the person of Hazrat ‘Uthman (ra)  and his companions. Some historians have claimed that conflicts of early Islam were the results of an alleged incompetence of Hazrat ‘Uthman (ra), while others have claimed this to have been the result of a bitter power struggle between various companions of the Holy Prophet (sa). In this lecture, His Holiness (ra) countered both these notions with clear evidence and clarified that conflicts arose due to the conspiracies of the enemies of Islam. This lecture is now available in a book form.[1]

Did Jesus Rise to Heavens?

In the next article, the author discussed the concept of the life and death of Jesus (as). In this article, the author states that based on the evidence given in the Gospels, Ahmadi Muslims believe that Jesus (as) was put on the cross, but he did not die on the cross. Rather, he was taken down from the cross alive in a state of swoon. Jesus (as)  was unconscious but alive when he was laid in the sepulchre and was alive when he came out of the sepulchre. According to the Gospels, the disciples of Jesus (as) saw him in his physical body form after the events of crucifixion. When Jesus (as)  met his disciples in secret in Galilee, some of them doubted him and were worried that they were seeing a spirit. Jesus (as)  reassured his disciples that he had escaped the accursed death on the cross by saying, ‘Why are you troubled and why do thoughts arise in your heart? Ye hold my hands on my feet, that it is I myself: and see; for a spirit hath no flesh and bones, as ye see me have.’[2] The Gospels further state that Jesus (as)  shared a meal of broiled fish and honey with his disciples. We believe that instead of making the bodily ascent to heavens, Jesus (as) travelled ‘to the lost tribe of Israel’, living in Afghanistan and Kashmir at the time. Jesus(as)  lived there to old age and we believe that Jesus is buried in Kashmir, in the town of Srinagar, in the street of Khan Yar.

The author argued that the disciples were promised to see the return of Jesus (as)  in the same manner he was supposedly raised to heaven. Yet, generation after generation had passed, but no such event was witnessed. From this, we must conclude that Jesus(as)  did not ascend to heaven as presented in the Bible[3].

In the context of the belief that Jesus (as)  ascended to heaven, the author referred to the description of heavens as given by eminent Christian authorities in the Encyclopaedia Metropolitana. It is cited, ‘Heaven, the abode of the happy spirits, is so called from a word that has been applied more universally to mean the whole firmament that is above the earth, and between the stars. It is derived from the verb ‘heafian’, to rise, whence our ‘heaven’…. It is not a material height designated by heaven, but an elevation to which the spirit is raised by ‘love’ and hell is not a depth materially, but the spirits’ ‘baseness.’’ Authors questioned the rationality of the concept that someone with physically perceptible body ascended to the heavens which has no material existence.

The remarks of Bromley were also rather interesting in this regard. He said that in Ezekiel 1:1 it says, ‘…the heavens were opened and I saw visions of God.[4]‘ Commenting on this, he says, ‘…these were not the outward heavens, for to what purpose should they open as a praeludium to visions…These, I say, were internal spiritual heavens, only discernible with the inward eye of the soul…’

The author then goes on to propose that only a few hours on the cross, gruelling as they were, were not sufficient to kill Jesus (as) . To support this assertion, the author quoted from ‘The Cradle of Twin Giants’ – Science and History; Vol 1, by Rev Henry Christmas MA FRS FSA. [5] In the memoirs of Baron Grimm, the eyewitness account of devout nuns volunteering to be put on the cross for three hours has been recorded by M deCondamine and M deGustel. Therein, it states, ‘Sister Rachel and Sister Felicite both between thirty and forty years of age, being moved in spirit to offer the lively image of the passion of our Saviour suffered themselves to be nailed through their hands and feet to two wooden crosses, and remained thus for more than three hours. It was apparent that they endured great agony especially when the nails were driven in and again when they were taken out, with occasional shrinking of the muscles and writhing though every indication of torture over which the mind had control, was suppressed with Indian fortitude. Not only so but to aid the delusion of those who admired them, and the deception of the spiritual directors, who affirmed that they felt exquisite delight: they sometimes pretended to slumber, as in a trance of beatitude. When they were taken down, the wounds, which bled profusely, were washed and bandaged, and that done the Sisters Rachel and Felicite sat down quietly to eat in the midst of those assembled there. Fraud in all this there was not, or deception on the part of women, otherwise than encouraging the belief that they felt pleasure instead of pain while suspended. They were fanatics, and to be pitied, for they were guided by consummate deceivers. Could any fraud have been suspected in such a case, the second exhibition puts its reality beyond suspicion. In this also to women were crucified, named Sister Francoise and Marie. The nails were examined by M. deCondamine, both when driven in and taken out; these were rough and square, more than three inches long, and entered the wood of the cross at least half an inch. Sister Marie could not hide the excruciating pain she felt when the nails were driven in, and within an hour cried out to be taken down, for she could no longer endure it; being unfastened, they carried her away senseless, to the great confusion of those associated with her. Sister Francoise being more strongly constituted, remained attached to the cross for more than three hours, though its position was frequently changed.’

Answers to an Inquirer

(By the Second Successor of the Promised Messiah (as))

The next article in The Review of Religions January 1921 was a collection of answers given to an inquirer by the second Head of the Ahmadiyya Muslim Community, His Holiness, Hazrat Mirza Bashiruddin Mahmud Ahmad (ra). The summary of these answers was that one of the aims of the Ahmadiyya Muslim Movement is to clarify the misunderstandings about the teachings of Islam held amongst the Muslim community. This would help transform people, who call themselves Muslims, into true Muslims. His Holiness explained that it is the duty of every Muslim to spread the message of Islam across the world to the best of his powers.  Therefore, it is also the duty of every Ahmadi to propagate Islam. This propagation involves preaching of the fundamental principles of Islam.

The fundamental principles of Islam are of two kinds.  Firstly, those concerning belief, secondly, those concerning actions. The former comprises a belief in the Unity of God, belief in all prophets, belief in in the decree and dispensation of God, belief in the existence of angels and in all the revelations given to the divinely appointed prophets. In terms of actions, there are positive and negative commandments. Prayers, fasting, pilgrimage, and Zakat are the fundamental positive commandments, while not to kill, not to steal, not to commit adultery, and not to be dishonest are the negative commandments of Islam.

His Holiness (ra) explained that the propagation of Islam means to convey to others one’s beliefs and recognise that not everyone will be willing to accept these. Our duty, like that of our Holy Master, the Prophet of Arabia, Muhammad (sa), is to convey the truth to the people in the best possible manner. After having done so, it is neither any credit, nor any blame to us whether the truth is accepted by thousands or no one at all. His Holiness (ra) expounded that as a citizen of the country as well as the Imam of the time, his duty was to warn the people of the consequences of their wrongdoings. His Holiness (ra) affirmed his role as advisory and said that to judge the fairness or otherwise of any action is up to God alone, no human being has the authority to do so.

In the news and notes section of the January 1921 issue, a report was published about the annual Ahmadi gathering in Qadian. The members of the Ahmadiyya Muslim Community assembled in Qadian in the last week of December to hold their annual gathering.  More than 2000 men were expected to attend from all over India, Ceylon, Mauritius, and Bukhara. This four-day event started on the 26th of December. On the first day, many faith-inspiring and scholarly speeches were delivered pertaining to the Islamic way of divine worship, proof of the truthfulness of the Promised Messiah (as) and the Medinite life of the Holy Prophet (sa). On the second day, the topic of the morning speech was ‘The Comparison of Islam with Other Religions.’  In the afternoon, the Second Head of the Ahmadiyya Muslim Community delivered a faith inspiring speech.  On the third day, His Holiness (ra) delivered a highly instructive speech about angels and this epic address continued the next day. On the fourth day, a further speech was delivered on the topic of the prophethood of the Promised Messiah (as).  For ladies, provisions were made to attend the meeting in Masjid Aqsa.

The January edition of The Review of Religions in 1921 also included the report about preaching activities in the United States of America and in Hyde Park, London. This issue of the magazine also contained the sad report of an attack on an Ahmadi, Prof Maulvi Hakam Ali, in the classroom of the Islamia College, at the hands of a gang of shouting students. The courage and bravery of a small band of loyal students were appreciated, who defended the professor and helped escort him to safety. 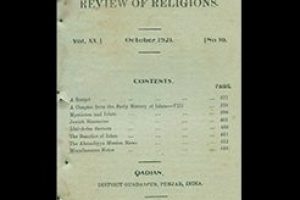 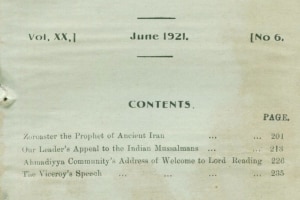