Hazrat Khalifatul Masih II (ra), who was the Imam and Khalifa of Jamaat Ahmadiyya from 1914 to 1965, took a keen interest in national and international politics, especially where the interest of Muslim Ummah was at stake. Being a strong opponent of non-co-operation movement that was encouraged by the Muslim clerics living in the British India, he wrote a strong response that the name of religion was being used for political expediency. This was published in Urdu. The Review of Religions summarised this response in English and published its first part in the February 1921 issue.

In this article, the second Head of the Ahmadiyya Muslim Community, His Holiness Hazrat Mirza Bashiruddin Mahmoud Ahmad (ra) clarified the true Islamic teaching about non-co-operation with the government. In the 20th century, the British India was rife with successive and divergent anti-government political movements. Two completely different historical events provided Muslims and Hindus of British India to come together to protest against the British Government. The resulting Non-cooperation Movement threatened the peace of the Indian subcontinent. The Muslim clerics had declared that the Non-co-operation Movement against the British Government was a religious duty of Indian Muslims.

While acknowledging that the massacre of Indians during the Jalianwala incident in April 1919 was deplorable, where British authorities opened fire and indiscriminately shot at unarmed, peaceful and already dispersing protestors, killing and wounding hundreds. His Holiness reminded of the fact that the mob had broken the established law of the land, which cannot be condoned. His Holiness asserted that it is not up to individuals to pick and choose which law to follow and which to break; this would lead to chaos. The other reason inciting the Non-cooperation Movement was Turkish Peace Treaty at the end of the Great War, which the His Holiness argues, was far from judicious. It did not address the root causes of previous conflicts, and also sowed seeds for several new ones. The Treaty may not have been biased on religious grounds, but was certainly against the interests of Turkish Muslims. For example, according to this treaty, Christian Armenians were granted a sovereign status, while predominantly Muslim Syria and Mesopotamia were not, which was clearly against the Muslim interest. His Holiness emphasised that Muslims would be abdicating their responsibilities if they accepted this treaty as a fait accompli; it was their duty to do their best to reverse this injustice. The Muslim response of migration to Afghanistan was not a practical or appropriate solution and the proposal of ‘Non-cooperation’ with the British Government was against the Islamic teaching.

His Holiness questioned the motive of the non-cooperation movement; was it a religious duty or a matter of political expediency? Citing various verses of the Holy Qur’an, such as verse 2 of the chapter 60, ‘O ye who believe! take not My enemy and your enemy for friends, offering them love, while they disbelieve in the truth which has come to you and drive out the Messenger and yourselves from your homes merely because you believe in Allah, your Lord.’ His Holiness made the case that non-cooperation with the British was not an Islamic injunction. This is because the British had not forced people to change faith, nor had they expelled Muslims from their homes on religious grounds. The Great War was certainly not a religious affair. It was started by the Christians and against the Christians. Turks got involved in it at a later stage and then many Indians fought against them. Therefore, His Holiness asserted, it is a mistake to issue fatwas which are neither based on nor consistent with Qur’anic injunctions. With scholarly arguments, His Holiness proved that the clerics who suggest that non-cooperation with non-believers is an edict based on the Holy Qur’an are totally mistaken. His Holiness clarified that all injunctions of non-cooperation with a certain group of Non-Muslims are limited to sinful and unjust actions. On the other hand, the general rule is that of cooperation in other spheres of life. Hazrat Khalifatul Masih II (ra) argued that no authority for non-co-operation is found in the Qur’anic verses or the Prophet’s sayings cited by the advocates of this strategy. His Holiness also gave the sound advice to Muslims and Hindus of British India to practice endurance and self-restraint in the face of hardship, this helps build the character of a nation. The Islamic teaching is to promote peace and reconciliation, which would lead to mutual love and good will.

The Immorality of Interest and Dividends

The article is based on a paper read out by Mr John Gordon at one of the Ahmadiyya meetings in London. The editor notes that while commenting on this paper Ch. F. M. Sayal clarified a fine point regarding dividends that rent on land or property, profit from a joint-stock company or business is permissible in Islam as the risk is shared. However, dividend, as the sum paid in interest on a loan is not permitted in Islam as the burden of risk falls solely on the debtor.

The author began by paying tribute to the book ‘The Gospel of the Poor’ by J. Morrison Davidson as the main source of his ideas. The discourse strongly condemned the institution of interest and the pitfalls of the modern banking and debt system. The author presented ‘usury’ as an evil that is forbidden in all Abrahamic religions and put forth verses from the Old and New testament as well as Qur’an in support of his argument.

The author elucidated that even though ‘dividend’ and ‘interest’ are synonymously used terms in the Stock exchange, there is, however, a shade of difference between them. He presented the dictionary meaning of the term ‘usury’ and analysed its meanings in the context of everyday implication.

The author then turned to the religious realm and explains that under the leadership of Moses, usury was forbidden for the Children of Israel. He quoted various parts of the Old Testament showing that over the span of thousands of years, Jewish prophets propagated these ideals and ‘usury’ was considered extortion, an evil and prohibited act. Jesus is quoted as saying, ‘Lend hoping for nothing again’. The author laments that neither the Jews nor the Christians upheld those ideals.

Moving from the ancient Jewish and Christian thinkers to various esteemed secular views, the author quoted Aristotle, John Calvin, Martin Luther and A.W. Rayment, all unanimously declaring ‘usury’ to be sordid, unjustifiable and a great affliction to humanity. Considering the consequences of borrowing money on interest, the author explains the monetary impact of the First World War and the worrying state of the national debt and its cumulative, spiralling and compound nature. The way that debt seeps through the society and how its draining effects are borne by the ordinary man. He says: ‘Interest, it would seem, is really the punishment which clever people inflict on ordinary people for not being clever, and also which the industrious and the careful inflict on the indolent and the careless.’

The author questions the complacency of common people in remaining part of this system of debt and interest. He quoted the Qur’an in arguing that both the person taking and paying interest are equally at fault, however, empathises with the plight of ordinary citizens in being trapped within a very complicated web. He ended with these thought-provoking sentences:

‘Such, however, is the complexity of our European Civilization or brutalization, and so deep a hold has usury or interest taken on the thoughts and habits of our people that the writer is baffled to see a practical way out, except on revolutionary lines. Such a remedy, unless there were a change of heart on the part of the people, might be worse than the disease.’

Lord Rothschild, Sir Alfred Mond, Mr Wiezmarn and others have issued a manifesto to Jews throughout the world to make a supreme effort to subscribe £25,000,000 for the reconstruction of Palestine and to enable immediate Jewish immigration and settlement to be carried out. The efforts which the children of Israel and are making to come from all parts of the world and settle once more in the Promised Land reminds us of a prophecy given in Holy Qur’an, Chapter 17; Verse 105, ‘And after him We said to the children of Israel, ‘Dwell ye in the land; and when the time of the promise of the latter days comes, We shall bring you together out of various peoples.” 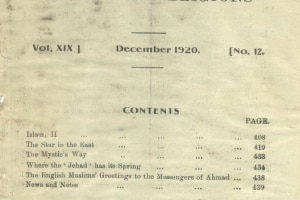 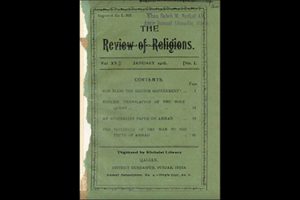