Not far from the capital Kuala Lumpur are the Batu Caves that attract visitors year-round. In around 1860, Chinese settlers began to excavate the caves and thirty years later, a shrine was placed in the cave and it became a Hindu shrine.

The Batu Caves are one of the most popular Hindu shrines outside of India and they are named for the Sungai Batu river which flows nearby.

A giant gold-painted statue of Lord Murugan (god of war and head of the army of the devas), 140 feet (42.7 metres) in height, stands near the base of the 272 steep concrete steps. These lead up to a series of limestone caves with Hindu temples dedicated to Murugan. Macaques freely roam the steps and happily interact with visitors.

In Malaysia, the Batu Caves are central to the Hindu festival of Thaipusam. This is largely celebrated by Tamil Hindus on the full moon in the month of Thai (January/February) and commemorates the event when Parvati gave Murugan a spear to fend off the demon Surapadman. 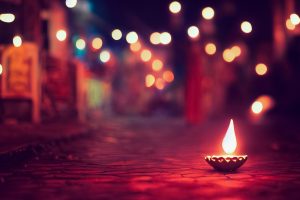