It was very sad to hear of the passing of Respected Chaudhry Hameedullah Sahib, a great servant of the Ahmadiyya Muslim Community. ‘Surely to Allah we belong and to Him we shall return.’ When I first heard of his passing, I penned some thoughts in memory as I had a personal connection with him.

In 2008 I was sent by His Holiness, Hazrat Mirza Masroor Ahmad (aba) to Rabwah, Pakistan for one year as part of my training as a Waqf-e-Zindagi (life devotee). I was to go to Rabwah to learn Urdu for translations and to acquire knowledge of the teachings of the Jama’at (Community) and its traditions. Chaudhry Hameedullah Sahib was the overall in-charge of my training and assigned an official time every single week where he would personally train me in his office. Therefore, for 12 months I spent a lot of time in his company and became closely attached to him.

Since Huzoor (aba) (His Holiness) had directly sent me to Rabwah, Chaudhry Sahib took personal charge of my time there. He was very concerned that he should ensure I am being looked after properly and my training is done correctly, and it was clear to me that he did so purely out of his obedience and love for Khilafat. Every week he would look closely at my progress.

At the same time, he did not want to spoil me and wanted to maintain a certain amount of toughness in my training as he kept saying you have to be trained to work with Huzoor (aba), so your training must be comprehensive. As a result, he would always be hands-on involved in all aspects.

I learnt from Chaudhry Sahib the true meaning of a ‘Bazurg’ (elder) in the Jama’at and how to uphold Jama’at values. Even after I returned to the UK, many times we spoke on the phone or met when he came here. Each time he would say the same thing ‘Was our training useful for you? Did we train you properly and you are working ok now?’ So even after many years, still his concern was whether he was able to provide the training which Huzoor (aba) wished for me. We always maintained a close connection whenever we met after I left Rabwah and would reminisce about the time we spent together.

The biggest training and lesson Chaudhry Sahib gave me, again and again, was that as a Waqif (devotee), I should always ensure I uphold the values and traditions of the Jama’at and Khilafat-e-Ahmadiyya at all times and defend these Jama’at values with all my energy.

I found him to be a walking encyclopedia of Jama’at’s history and traditions. By memory, he would quote different material from the history of the Jama’at. Sometimes he would relate personal experiences of being involved with the Khulafa in assisting to develop administrative setups, for example when the Waqfe-Nau scheme started and fulfilling the Khulafa guidance in this regard. His knowledge of Jama’at history was so deep that he started to tell me, in great detail, about my own family who were in Qadian and my lineage from the time of the Companions of the Promised Messiah (as) – more details than I knew myself. However, whenever he quoted the history or even when quoting to me about my own forefathers, it was not for the sake of it, rather he would explain that your such and such relative or great grandfather carried out such significant services for the Jama’at in Qadian. It was also a lesson to follow in their footsteps, and he would not just be giving information to me for enjoyment.

On one occasion, he told me that in the history of the Jama’at, we find that in Mauritius, one of the oldest Jama’ats, the very first converts to Ahmadiyyat were introduced through reading The Review of Religions.

I found him to have great knowledge of the teachings of the Promised Messiah (as) and Khulafa (Caliphs). He would also quote by memory many of the extracts or teachings of them as part of my training. Or sometimes he knew exactly where the lesson he wanted to give me should be found. He would say ‘Amer go to the bookshelf and take out volume x of Ruhani Khazain, or Tarikh Ahmadiyyat etc.’ Then, he would say go to that chapter and there would be the reference he wanted me to learn. Then, he would explain to me its context and background. This was repeated throughout my time and he always had an incredible knowledge of where to find references and of our Jama’at teachings.

I also witnessed, on many occasions, Chaudhry Sahib taking advice from various Wakeels (Heads of department) of Tahrik-e-Jadid or others. He had a systematic way of getting advice and was a very principled person, who never wavered from his principles. Sometimes he would call people to his office to ask them verbally, and sometimes he would write a letter (even though the Wakeel of that department was just a few offices away) and ask for certain people to give him their advice on any matter in writing. Then, he would consider Islam’s teachings of the traditions of the Jama’at in that matter. And then he would deliberate very carefully and make a firm decision.

I witnessed Chaudhry Hameedullah Sahib’s love for Khilafat. Whenever a matter required guidance of Huzoor (aba), then he did not care about anything else except for ensuring he obtained that guidance from Huzoor. And then when receiving that guidance, I witnessed him displaying complete obedience.

I was just a trainee Waqif with no years of service, and he the Wakil-e-A’la, who had worked closely with four Khulafa, yet he would treat me as if I was more important, only for the reason that I had been sent by Huzoor. His respect for Khilafat was so great. His humility in this regard was exemplary.

Chaudhry Sahib, I thought before I met him, was a very strict person and not as approachable. However, after spending a year with him I found, actually, he was a very kind and gentle person. Indeed he was sometimes strict in making decisions and coordinating the offices, which is necessary, and I witnessed him imparting instructions to other senior Wakeels firmly. But some examples showed me that underneath he was a very caring and compassionate person. When I came to Rabwah I also got married during this time and my wife joined me in the Tahrik-e-Jadid Quarters. Every time I met Chaudhry Sahib he would always ask about my wife as well. Every week I would report to Chaudhry Sahib for my time with him. Once, when I was leaving to go to Chaudhry Sahib, my wife said ‘send my Salam (greeting of peace) to Chaudhry Sahib’ and I conveyed it to him when I reached his office. Then Chaudhry Sahib asked me, ‘Is your wife home?’ and I said yes. So then, Chaudhry Sahib walked with me to my residence and my wife came and he said to her ‘You said your Salam to me so I wanted to personally come and say Walaikum Salam to you’. Then, he asked her himself if everything was alright and if anything was needed.

In Rabwah, when I was there, we had padlocks on home entrance doors. Chaudhry Sahib once advised me ‘always bring your key with you for your homes’s padlock, even when your wife is at home. This is what I do as well for my wife because our timings as Waqifeen are different. If we have to come back home late, there is no need to disturb your wife to make her open the door. You should have your own key at all times.’

With Chaudhry Hameedullah Sahib a now quite-well-known joke occurred, which Huzoor would recount to many people with great laughter. As it is far more blessings to recount this in Huzoor’s words, I quote from Abid Khan who has mentioned this in one of his diaries as follows:

‘Thereafter, Huzoor told me an incident pertaining to a friend of mine, Amer Safir, a Waqf-e-Zindigi (life devotee) serving currently as the Editor of the Review of Religions. When Amer dedicated his life, several years ago, Huzoor sent him to Pakistan for a year to learn Urdu. With the Grace of Allah, his Urdu has now reached a level where he often live translates Huzoor’s Friday Sermons or other addresses. However, with a smile, Huzoor told me his Urdu was not always at such a level. Huzoor said:

‘When I first sent Amer to Pakistan, one day he received a message in Urdu that ‘Wakil-e-Ala, Chaudhry Hameedullah sahib aap ko yaad farmaa rahay hain’, meaning ‘The Wakil-e-Ala’ is remembering you’, which is a common and polite way in Urdu to call someone. Upon receiving this message, Amer said ‘Jazak’Allah’ and stayed in his room. Then after ten or fifteen minutes, the same person came back and repeated the message and again Amer said ‘Jazak’Allah’ and remained in his room. Thereafter, the third time the person came and gave the same message. Amer was very happy thinking that Chaudhry sahib is missing him so much that he keeps sending these messages of affection! It was only on the third or fourth such occasion that the messenger finally explained to him that this was not an expression of remembrance, rather Chaudhry sahib was actually calling to his office!”

I remember when Chaudhry Hameedullah Sahib travelled to London, perhaps for Jalsa during the Jubilee year (I remained in Rabwah for training), on his return he told me that he and Nazir-e-A`la Sahib, the late Sahibzada Mirza Khursheed Sahib, were sitting at a dinner or lunch with Huzoor (aba). Huzoor (aba) then proceeded to recount this entire joke to them, to great laughter!

He was a very hard worker, one of the hardest workers I have seen. During my time in Rabwah perhaps out of everyone in Tehrik-e -Jadid offices he worked until the latest. Offices closed at 1 or 2 pm and everyone went home but Chaudhry Sahib would still be there. Then in the evening, he would often return again, when almost all other offices were closed. This was particularly more the case as this was 2008, the Khilafat Jubilee year and Chaudhry Sahib was the President of the Committee, and worked extra long hours to fulfil his role. On many occasions, I said congregational prayers with him and his staff in his office in the evenings, as he was completing work and could not leave.

During the 2008 Khilafat Jubilee celebrations, when Huzoor-e-Anwar delivered his historic address at the Excel Centre in London, I was still in Rabwah as part of my training. Although I sorely missed being in London, perhaps the one place to be at the time other than London was Rabwah or Qadian. Being in a city with tens of thousands of Ahmadis all celebrating together, was a unique experience. On the day, special arrangements were made to place ‘diyay’ or clay lanterns across offices and buildings all over Rabwah. These would light up at night in a special celebration. At the time Chaudhry Sahib had also arranged for some diyay to be placed on my home, as it was within the vicinity of the Tahrik-e-Jadid complex. Thus, we also partook in the celebrations along with the population of Rabwah.

Chaudhry Sahib would always remain calm and composed, his discipline and work ethic was incredible and his loyalty to Jama’at unquestionable. Most of all his dedication and obedience to Khilafat was something I routinely witnessed. May Allah the Almighty elevate the station of Respected Chaudhry Hameedullah Sahib and grant him a station in paradise amongst His beloved ones. Ameen. 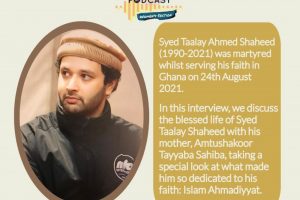 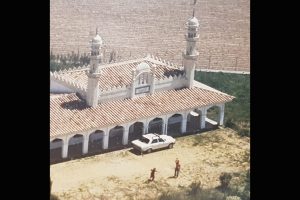 El Coran y las Monjas – The Quran and the Nuns 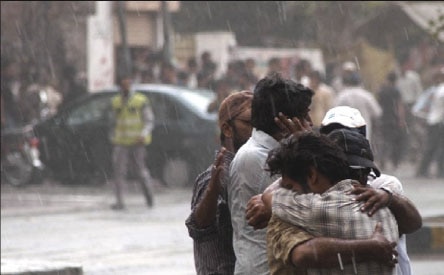 Islam Ahmadiyyat – The Means of Safety and Salvation