After reciting Tashahhud, Ta‘awwuz, and Surah al-Fatihah, His Holiness, Hazrat Mirza Masroor Ahmad (aba) said that by the grace of Allah, the Ahmadiyya Muslim Community had the blessed opportunity to commence its Jalsa Salana on the previous Friday. Due to the coronavirus, it was not held the year before, and there was a possibility of it not being held once more this year. His Holiness (aba) said that perhaps there was relaxation in the preparations leading up to it, which would, in turn, lead the volunteers to be relaxed as well, but he also had trust in Allah that it would be completed in a proper manner.

Appreciation to all the Workers & Volunteers

His Holiness (aba) mentioned that many people wrote to him to express their gratitude to all the workers and volunteers. They helped especially with enabling the cars to get unstuck from the muddy grounds, which was a huge task indeed. This effort did not go unnoticed and MTA even broadcasted it, which left a great impression on the people.

Likewise, many volunteers came to help in other departments such as hygiene, cooking and service food, placing the tracks on the ground etc. Again, many were impressed by these efforts having watched on MTA. Not only was the Jalsa broadcasted to the whole world, all the preparations and proceedings were also shown, in a way that left them astonished and instilled a spirit of gratitude in them for their efforts.

His Holiness (aba) expressed his gratitude to all those who worked selflessly and said that he will present some of the sentiments expressed to him via mail from all over the world.

His Holiness (aba) then stated that there was however one thing missing, which is the global Bai’at [oath of allegiance] ceremony which many looked forward to.

Thereafter, His Holiness (aba) said that people participated from 22 places around the world apart from the UK, such as the US, Canada, Guatemala, Bangladesh, Niger, Mauritius, the Gambia, France, Germany, Finland and many others.

Testimony to the Blessings of Khilafat and the Jalsa

One person from Niger who was an opponent of Ahmadiyyat, watched the three days of the proceedings. After which he admitted that if all the this was all a proof of the truthfulness of Islam and he was greatly impressed, hoping all the Muslim world would be able to follow this example.

His Holiness (aba) said that a Non-Muslim from Nigeria watched the Jalsa proceedings and said that this is most certainly a true community of God, and that they wished to join Ahmadiyyat.

A non-Muslim teacher from Zambia said that having watched the Jalsa proceedings on MTA, she was convinced that Islam is the only religion that gives women their full rights and was impressed by the Islamic teachings about responsibilities of both men and women.

His Holiness (aba) reminded all Ahmadis that they should maintain this level of obedience and of setting a good example even in their homes, not just during the three days of Jalsa. It should not be that we are deceiving the world by only doing so in those three days.

His Holiness (aba) said that one person mentioned they were so impressed by the atmosphere during the Jalsa and the spirit of sacrifice and service. Indeed this is something which only a community of God can display.

His Holiness (aba) then stated that a chief from a village in Cameroon said that he was always taught that when the Imam Mahdi comes, all the world would see him. Having watched the Jalsa, he was convinced he was watching the community of the Imam Mahdi and his representative in the Caliph of the Ahmadiyya Muslim Community.

A non-Ahmadi Muslim in Tanzania said that it was the first time they had watched the Jalsa. All the misconceptions they had heard about Ahmadiyyat were dispelled and saw nothing but love and truth.

His Holiness (aba) related that a new convert from Malaysia said that having watched the Jalsa Salana UK, they were so grateful to Allah for having enabled them to accept Ahmadiyyat and that they would have been deprived of all these blessings had they not been part of such a blessed community. They also said that they will now promise to strengthen their bond with His Holiness (aba).

His Holiness (aba) said that many people praised the wonderful organisation during the Jalsa, despite the difficult circumstances, and others praised the beautiful recitations during the proceedings.

One person from Mauritius said that they were so impressed by the entire Jalsa, and that every single word of the Caliph (aba) during his addresses left an impression on their heart.

How the Jalsa Continues to Draw Souls to the Truth

A person from Ivory Coast says that after having watched the Jalsa, he and a few friends were speaking about the Ahmadiyya Community in a restaurant. After some time, an unknown person spoke and said that if any community is acting upon the true teachings of Islam today, it is the Ahmadiyya Muslim Community. Having said this he got up and left. He later met the Mu’allim of the Community and said he wished to no longer be deprived of such blessings and thus entered the fold of Ahmadiyyat.

A Mu’allim from Congo said that a Christian friend watched the entire Jalsa proceedings along with his wife. Having done so, he said to her that he doesn’t believe they can find such teachings and guidance anywhere else. He then said that they have wasted a large part of their life in Christianity and what they learnt during these three days, they couldn’t find in an entire lifetime in Christianity. In this way, both of them and their children accepted Ahmadiyyat.

His Holiness (aba) said that the addresses were broadcasted in Senegal over 4 radio channels and on TV. One very well-educated radio host was so impressed with the words of the Caliph (aba) and was certain he had found the truth. He and his family all joined Ahmadiyyat thereafter.

His Holiness (aba) said that one person from Guatemala mentioned that they were certain, having watched the Jalsa Salana UK, that this is a divine community. He used to teach the bible for many years, but having researched about Ahmadiyyat, his life changed completely and he began praying regularly and attending the mosque.

Then, His Holiness (aba) said that a person in Albania watched the Jalsa proceedings and said that the message of the Caliph (aba) was what will save humanity and remind them of their responsibilities. What he saw during the Jalsa, and the services being rendered, such as the ones by Humanity First all around the world, really impressed him.

His Holiness (aba) presented various impressions of others who expressed their amazement at the teachings they had learnt, and they said that the Muslim world is most certainly in need of a Caliph to bring them together, just as the Ahmadiyya Muslim Community is one united community, which is spreading the true teachings of Islam. He said that many people later joined Ahmadiyyat from various countries around the world having listened to the Jalsa proceedings, and having heard the words of the Caliph (aba).

Messages of Support from Leading Figures

His Holiness then said that many people watched the Jalsa Salana UK proceedings via MTA Africa, but apart from that it was also watched live on many other TV channels. He mentioned that the message reached many millions of people according to one estimate.

His Holiness (aba) said that one non-Ahmadi watched the Jalsa proceedings to learn what the difference was between Ahmadiyyat and other Muslim groups. Having done so, he was convinced that all the propaganda against Ahmadiyyat was entirely false and that it is only through the Ahmadiyya Muslim Community that the true teachings of Islam are being presented to the world. He said that he felt it was his responsibility to now convey this message to all those around him.

His Holiness (aba) then prayed that the Jalsa continues to bring about good results and enable more and more people to turn their attention to the true Islam, and may the people be safeguarded from the evil of the so-called clerics. 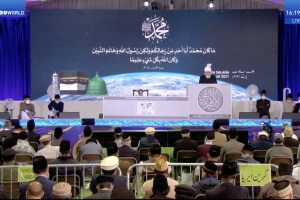 Address at the Final Session of Jalsa Salana UK 2021: ‘Fulfilling the Rights of Others’ (Summary) 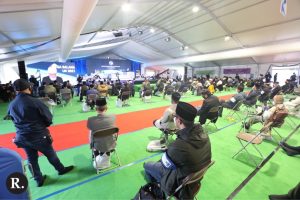