The ongoing events of Russia’s invasion of Ukraine have created global uncertainty and the potential for widespread escalation. There is a real fear and looming possibility of nuclear war according to numerous political analysts.

The daily dose of such devastating news – nuclear war is ‘back within the realm of possibility‘; the world could be only ‘a few steps’from atomic weapons being used; a new nuclear arms race is a real possibility – all feed a sense for a surge of doomsday bunkers.

Ironically, today, our greatest fears; pandemic to climate change and nuclear war have shifted to finding or prepping bunkers to survive the calamity.  Privileged people have already made bunkers with state-of-the-art facilities in anticipation of a world war

But can bunkers really protect civilians from a nuclear attack? Will life be the same for survivors of war living in nuclear fallout shelters? Would a post-war world even be worth living in? These are some of the worrying issues that need to be addressed by our leaders who should re-think their war policies considering the number of innocent lives at risk.

In previous articles, the wider implications of nuclear war and the aftermath of such catastrophe on our generations were outlined. This article will examine the psychological effects of life in underground blast-and-radiation-proof shelters or bunkers.

Living underground for a short-term isolation might seems easy to imagine. However, a challenge lies in constructing an enduring psychologically tolerable environment so that the members of the new bunker society don’t start killing each other.

Describing constraints of bunkers, Bradley Garrett, a social and cultural geographer at the University College Dublin, in his article The bunker builders preparing for doomsday wrote: ‘Given the severe limitations of underground living, anything extraneous must be eliminated.’ He further elaborates on the stress levels stating,‘In the event of a major incident, the umbilical cord to the world on the other side of the blast doors would be snipped and the clock would start ticking to a resupply.’

Governments, the military, and universities conducted numerous studies during the Cold War to observe how people could tolerate each other being isolated underground for prolonged durations. Bradley also highlighted a 1960, US National Science Foundation study, in his book Bunker: Building for the End of Times that reported, ‘extended time underground may involve many physiological deprivations and adverse environmental conditions. Many of these stresses have significant effects on behaviour. These include decreased efficiency in performance, difficulties in concentration, irritability, depression, and personality disturbances. Special groups such as children, pregnant women, and the ill would be particularly affected. A common element in the various environmental stresses is frustration. Common reactions to frustration include aggression, depression, regression, and withdrawal.’

The effects of underground life on humans were comprehensively studied by the Disaster Research Group funded by the National Academy of Sciences. Their findings, published in 1960 titled ‘Human Problems in the Utilization of Fallout Shelters’, suggests that prolonged underground isolation impacts people both physically and psychologically. According to the report, ‘Many of these stresses have significant effects on behaviour… These include decreased efficiency in performance, difficulties in concentration, irritability, depression and personality disturbances.’

This means that even if people do survive living in bunkers, it will be difficult for them to thrive. Inevitably, unrest in any post-apocalyptic underground society might be observed.

Feeling Claustrophobic – a Constant Threat to Life and Health

In 2018, Yong Li, Yanping Yuan, Chaofeng Li, Xu Han, and Xiaosong Zhang monitored the physical reactions of people while staying in underground refuge chambers and concluded that in underground confined spaces with a crowded population, the thermal environment will be hot-humid and have high CO2 concentration resulting in significant changes of headaches symptoms and its severity and frequency. Less fresh air with higher CO2 levels also leads to severe health issues.

Inside the bunkers, the continued sounds of explosions overhead and the feeling of helplessness in addition to the sound of children crying portrays a very grim situation.

Bernd Freytag von Loringhoven, describes what it was like to live inside a bunker, in his book In the Bunker with Hitler: The Last Witness Speaks: ‘Most of the people had nothing left to do there…They saw themselves as living corpses and spent their final days in their rooms… A major topic in all conversations was when and how one was supposed to kill oneself…’

Otto Klineberg, chairman of social psychology at Columbia University in his lecture ‘Dangers of the Shelter Psychology’ emphasised the constant survival threat faced by people in bunkers:

‘To burrow beneath the ground for weeks, even longer, means for human beings a denial of most of the values which have been acquired slowly and painfully in the process of creating a democratic society. Instead of community, there is the splintering into isolated individuals or tiny groups. Instead of cooperation, there is violent competition for available space. Instead of mutual aid, there is a selfish struggle for individual survival.’

Dozens of Ukrainian children are hiding in bomb shelters, basements, metro stations, and other underground areas while others have fled their homes for neighbouring countries.

According to Dr Paul Wise, professor of paediatrics at Stanford University, ‘Children are extremely vulnerable to insecurity, not only the physical trauma but the psychological trauma, and it can reverberate and have repercussions for a long time.’

In 1958, Donald Hebb, a Canadian psychologist did research on extreme isolation. Hebb’s study revealed that those isolated were unable to think clearly about anything for any length of time and that their thought processes seemed to be affected.

The continued experience of war and displacement from one’s own house, land, and loss of loved ones triggers emotional imbalance. Such stressful conditions of the war and displacement directly impact mental health without any exception; be it rich or poor, child or adult, man or woman. The increased risk of mental disorder following war trauma and living in underground shelters has also been observed in children.

K.E Miller and A. Rassmussen carried out an in-depth study on the mental health of civilians displaced by armed conflict, published in Journal of Epidemiology and Psychiatric Sciences suggest that both war trauma and post-migration stressors exert a powerful influence on mental health and the post-migration environment plays a critical role in either fostering or impeding recovery from war-related trauma and grief.

Recently, His Holiness, Hazrat Mirza Masroor Ahmad (aba), the Worldwide Head of the Ahmadiyya Muslim Community delivered an address at the IAAAE International Symposium 2022 in which he provided a long term vision to help safeguard society and avoid the risks associated with war and conflicts. His Holiness said:

‘It is said that some extremely wealthy individuals have constructed elaborate underground bunkers with state of the art facilities in anticipation of a potential global war. Such bunkers might serve to protect those few privileged people, but what about the fate of the rest of humanity? Besides, those who are able to shield underground should not be under the delusion that a fortified bunker will leave them immune to the devastating consequences of a world war. For one, living isolated lives underground will surely lead to a myriad of mental health issues, frustrations and anxieties.’

‘Furthermore, what will those rich people do when they emerge from their bunkers to find that life has changed beyond all recognition? What will they do when they see that those poor people upon whom they relied day and night now lay dead or maimed, and a cloud of darkness had enveloped the world. Given this, all people, rich or poor, should recognise that what is happening today has the potential to affect everybody and that the future of mankind is at grave risk. Where we must pray that the world’s leaders see sense and deescalate before it is too late, we must also stand ready to play a leading role in rebuilding society if, God forbid, such horrific circumstances ever come to pass.’

As His Holiness has directed on numerous occasions, the only peaceful solution to the current state of the world is that ‘we must all fervently supplicate before Allah the Almighty, praying for a peaceful resolution to this current conflict.’ 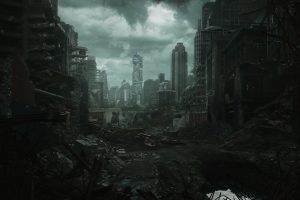 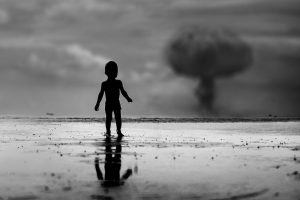 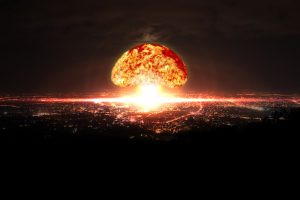 Beyond Battlefields: The Global Impact of Nuclear War

Nuclear Famine: Radiation Exposure & Effects on Agriculture
The Story of a Star
Comment