The Church of Our Lady Mary of Zion is an ancient site in Axum, in northern Ethiopia, and holds special significance as a place of pilgrimage for Ethiopian Orthodox Christians.

The compound includes the old church, a more modern cathedral built in the 1950s by Emperor Haile Selassie, and a chapel claimed to house the Ark of the Covenant (the most sacred relic of the Israelites, which contains two of the tablets of the Ten Commandments).

According to local tradition, the queen of the people of Saba and the wife of Solomon (as) was from this region, and when their son Menelik I visited Solomon (as) in Palestine, he is claimed to have brought back the Ark to safety in Ethiopia in around 950 BCE. Most historians are not convinced of the authenticity of this claim, but the local Orthodox Christians believe the account and come to the church in great numbers each year on 30th November for the Festival of Tsion Mariam. An ancient town that has been continuously inhabited for almost 3,000 years, Axum has historic links to early Judaism.

Axum had a Jewish population and was known as a tolerant kingdom. Not long after Emperor Constantine had adopted Christianity as the official religion of the Roman Empire in 325 CE, King Ezana of Axum adopted the religion for his people in northern Ethiopia around 340 CE, and over the centuries, Ethiopian emperors were crowned at the Throne of David in the compound. The Ethiopian Orthodox tradition is similar to Coptic Christianity in north Africa, but also leans towards Judaism in areas such as diet, the role of women, fasting and circumcision. [1]

The original church is thought to date from the 4th century CE during the time of Frumentius, who brought Christianity to Ethiopia and became the first bishop of Axum, and was built over a former pagan shrine. [2] The Ethiopian Christians were more aligned to the Coptic Church in Cairo than to Roman Catholicism. The church grew in strength, and it was to this community that a group of early Muslims were sent to for safety due to the persecution from the Quraish tribe. They were granted freedom to practise their religion in the kingdom of what was then known as Abyssinia.

The old church has been destroyed and rebuilt at least twice throughout history, and there is no doubt of its significance for the Ethiopian Orthodox Christian community. 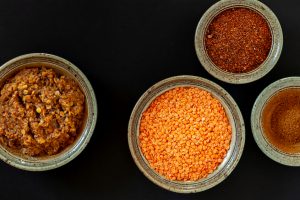