The journey of Jesus(as) to India, Kashmir and Afghanistan in search of the lost tribes of Israel is strongly supported by Biblical, historical and traditional literature. Some inhabitants of these areas have called themselves ‘Beni Israel’ from time immemorial, and take pride in being of Israelite origin.[1] Historical evidence supporting the journey of the tribes of Israel is compelling.[2] The traditions of these people suggest that they originated from Syria and were taken into captivity by Bukhtunasar (Nebuchadnezzar), the king who reigned (c. 605 BC–562 BC) the Neo-Babylonian Empire. Nebuchadnezzar conquered Jerusalem in 597 BC destroying both the city and temple in 587 BC; he deported most of the Jewish population to Babylon and planted them as colonists in different parts of Persia and Media. They subsequently immigrated eastward into the mountainous country of Ghor (central Afghanistan). They were called by the neighbouring peoples ‘Bani Afghan’ and ‘Bani Israel,’ or ‘children of Afghan,’ and ‘children of Israel.’ Thus, from a common origin in the Middle East, the expulsion of Jews by Nebuchadnezzar led to the establishment of Jewish communities in Europe, Africa and Asia, in what is termed the Jewish Diaspora. The Jewish diaspora (or simply ‘the Diaspora’), is the term used to describe exile.

Jesus(as) was a prophet of God entrusted with the job of reforming the lost tribes of the Israelites. After surviving crucifixion, Jesus(as) went east in search of these lost tribes. Here we will examine scientific evidence for this Jewish migration. A literature search was carried out to seek the evidence to answer the following questions.

Medical literature was reviewed looking for information concerning Jewish genetic characteristics, disease prevalence and genetic differences between the Jewish and non-Jew population. The literature search focussed on specific DNA abnormalities (mutations) that may serve as indicators of genetic diversity.

Before presenting the results of the literature search, some of the basics of genetic science are presented for clarification purposes, for those readers from non-scientific backgrounds.

DNA (deoxyribose nucleic acid) is the building block of life. DNA is located in the centre of the cell in a structure called the nucleus, whilst the powrhouse of the cell is called mitochondria. The DNA in the nucleus is a ribbon-like structure; inside a cell DNA is stored in a condensed form called chromosomes. Human beings have 46 chromosomes, which are in turn made up of thousands of genes.

Genes – It is estimated that there are approximately 30,000 genes in each human cell. The combination of all genes makes the blueprint for the appearance and function of the human body. Genes control cell growth and development, and determine appearances such as colour of eyes, hair etc. Genes are the biological material that can be passed from the parents to their offspring.

Chromosomes contain matching pairs of a specific gene which is located in the same position on each chromosome. One copy of a gene is inherited from the mother and one from the father.

Mitochondrial DNA – A small amount of DNA is also found in mitochondria. Mitochondria are inherited from the mother only.

Study of genetics – Genes can be passed from one generation to the next. A study of genes can indicate a person’s genomic origin. Certain diseases are caused by genetic mutations and as genes can be specific for a certain race, a study of the pattern of genetic diseases can point to the genetic similarity of a group of people. Mitochondrial gene analysis provides information about the maternal origins of a person.

Summary of the Scientific Evidence

1. Do Jews have particular genetic characteristics to identify them as a separate entity?

Yes. Contemporary Jews comprise an aggregate of ethno-religious communities with shared religious, historical and cultural traditions.[3] By the use of modern genetic techniques Jewish ancestry can be identified and analysed.

A majority of men from the Jewish priesthood (Cohanim) carry a characteristic group of genes on their Y chromosome called the Cohen Modal Haplotype (CMH).[4] This unique group has been used to trace the Jewish ancestral origins of various populations. Scientific data indicates that the majority of contemporary Jewish priests are descended from a limited number of paternal lineages.[5]

The scientific evidence demonstrates that a characteristic genetic marker called an extended CMH predominates in both Ashkenazi (Jews descended from the medieval Jewish communities settled along the river Rhine and Eastern Europe) and non-Ashkenazi Jews, and is remarkably absent in non-Jews.[6] In other words, Jews of the Priesthood progeny can be identified as those carrying the gene grouping called CMH.

2. Is there any reliable genetic evidence that Jews have emigrated east in ancient times (Lost tribes)?

Yes. There is strong genetic evidence of a Jewish settlement on India’s West coast in Cochin and Malabar from the 10th century CE.[7] Genetic studies indicate that Cochin Jews have similarities with other Jewish sects, in particular the Yemenite Jews, and to a lesser extent with the indigenous populations of southern India.[8]

HLA proteins are specific markers of genetic similarity. HLA proteins are located on the surface of the white blood cells and other tissues in the body. HLA is passed from generation to generation, often as a recognisable group due to their close proximity. Scientific studies have demonstrated that HLA type and frequencies within the Cochin Jews were very similar to that observed in other Jews. A study of serum samples from 223 Jews from Cochin indicated considerable genetic mixture between indigenous Indians and the Jews, signifying a degree of intermarriage.[9]

The ‘Bene Israel’ is a Jewish community in western India whose origins are unknown. DNA samples were collected by the researchers from the School of Oriental Studies in London assessing genetic similarities between the Indian Bene Israel tribe, indigenous Indian population and the Jewish population.[10] The marker of ancient Jewish heritage (Haplogroup 9 comprising the CMH pattern), was found in high frequency in Bene Israel and in much lower frequency in the indigenous Indian group.[11,12] Such data clearly suggests that the Bene Israel population have characteristics of Jewish parentage.

Nevertheless, there are genetic characteristics of the Bene Israel that show them to be different from mainstream Jews. The Bene Israel were found not to carry those genetic changes that entered the Jewish gene pool in relatively recent years. For example, the marker of relatively more recent Jewish heritage namely, Haplogroup 21, which entered the gene pool from North African and the Mediterranean population at a later stage, was present in mainstream Jewish communities, but was absent from the Bene Israel population. Researchers have suggested that this indicates that the Bene Israel are Middle Eastern in origin.[13]

In genetic terms, the divergence time is defined as time taken to develop independent genetic changes. By using the science of genetics, there is evidence to suggest common ancestors of Jewish Priesthood going back 3000 to 4000 years. More recently when Jewish men from the Diaspora and non-Jewish men were assessed, the Cohanim lineage was found to be more prevalent in the Near East (part of the Ottoman Empire; mainly the Middle East). Two extended CMH types which predominate in both Ashkenazi and non-Ashkenazi Cohanim, were absent in non-Jews. Such results support the hypothesis of a common origin of the CMH in the Near East well before the dispersion of the Jewish people into separate communities.[14]

Mitochondrial DNA studies which look at the hereditary characteristics from the mother’s side, also support maternal ancestry in the Bene Israel population.[15]

3. Does genetic evidence from disease patterns support the hypothesis that migration of Jews took place?

Yes. Genetic diseases can affect up to 10% of the population and as genes can be specific for a certain race, a study of the pattern of genetic diseases can help trace the genetic origin of a group of people. BRCA 1 and 2 are two tumour suppressor genes, BRCA1 and BRCA2 and certain mutations of these are almost exclusive to Ashkenazi Jewish women. However interestingly, they are also found in some Indian women suggesting a common genetic heritage.[16,17]

A study of Fanconi’s anaemia in unrelated Israeli Jewish (non-Ashkenazi) patients identified an Indian mutation along with other ethnic mutations. These ‘Indian mutation’ carriers were identified among 53 Indian Jews, once more suggesting a common ancestry.[18] Genetic screening of Persian Jews confirmed a high frequency of genetic abnormalities leading to diseases affecting metabolism and muscles like Tay-Sacks disease, hereditary inclusion body myopathy and others, suggesting an ancestral Jewish origin for this population in Iran.[19]

The genetic abnormalities that lead to a group of genetic diseases affecting the muscles of the body called inclusion body myopathies are located on chromosome 9 in both Afghani and Iraqi Jewish patients, while non-Jewish patients have a different genetic abnormality associated with this disease.[20] The genetic abnormalities causing this disease affect Jews, Arabs and Iranians and are thought to be at least 1300 years old.[21,22] All of these findings strongly point towards a common Jewish ancestry with eastward migration of Jewish tribes into Iran, Iraq and Afghanistan, centuries ago. Thus, evidence from genetic diseases does indeed lend further support to the lost tribes theory and strongly supports a common ancestry of Jews in some Indian and Pusthun populations.

4. Is the genetic makeup of the indigenous population of the east any different from that of the emigrated communities?

Comparative genetic studies of Bene Israel Jews and indigenous Indians have found a group of genes referred to as Haplogroup 28, which is widespread in the Indian population but is hardly represented in the Bene Israel population. Data such as this clearly show that the population that claimed to be migrant, are found to be different from the indigenous population in genetic comparative studies. Similarly, the genetic diversity of the Bene Israel population was found to be significantly less than that of the Indian population.[23] This simply reflects the Jewish practice of marriage within the extended family.

Interestingly, retinoblastoma, which is a hereditary cancer of the eye, has been found to be genetically different when ethnic Pushtuns were compared to the general Pakistani population.[24] This suggests that Pushtuns are genetically different from the indigenous Pakistani population. Not all studies have found evidence of a Jewish link in Pushtun and Kashmiri men. Jewish populations commonly have a moderate frequency of haplogroup 21 (e.g. 20%) and a high frequency of haplogroup 9 (e.g., 36%).[25] Studies assessing 12 Kashmiris and 93 Pathans found low frequencies of both of these haplogroups, thus not supporting the claim of Jewish heritage. However, the conclusion needs to be treated with caution in view of the small sample size.[26]

The ground breaking book Jesus in India, has provided strong historical evidence in support of a Jewish migration in the ancient past. It was to these lost tribes that Jesus(as) was to return, as a reforming Messiah. The conclusion from the genetic information presented above suggests that there are at least some ethnic groups in the East whose founders had originally migrated from the Middle East, many centuries ago and were of Jewish heritage. Therefore, the historical evidence for the “Lost Tribes of the House of Israel” is indeed supported by the science of genetics.

Professor Amtul Razzaq Carmichael MD, FRCS (Gen Surg), MBBS, a special contributor to The Review of Religions, is a consultant specialist breast surgeon. She qualified in 1987 with gold medals for academic Excellence and undertook her surgical training at major teaching hospitals in London, Edinburgh and Philadelphia. She has authored many articles for major peer reviewed scientific journals. 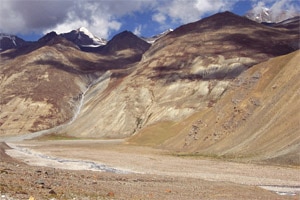 Jesus in India – King of Wisdom