A huge campaign is currently underway by all chapters of the Ahmadiyya Muslim Community worldwide – now established in over 200 countries – to present to the world the true image of the Holy Prophetsa and Islam in a peaceful, rational and loving manner through exhibitions, conferences, flyer distribution, lectures, dissemination of literature interfaith peace seminars and through demonstrating the Islamic teachings in practice. The Ahmadiyya Community has always undertaken such endeavours since its inception. However, these efforts have now intensified in the aftermath of the release of Innocence of Muslims. Over the next few pages we will depict just some of the efforts the Ahmadiyya Muslim Community has carried out since the release of the anti-Islamic film, and will display how true Muslims react in such situations. This is only a mere glimpse into a fraction of the total ongoing worldwide response of the Ahmadiyya Community. We present examples from a small selection of countries.

Meetings were held with over 50 Muslim Community leaders from various ethnic backgrounds. Each group endorsed actions taken by the Ahmadiyya Community and they categorically stated that only the Ahmadiyya Muslim Jama`at can truly respond to attacks on Islam.

On October 14th, thousands of Ahmadi men, women and children visited homes in 114 cities of Canada. Over 300,000 specially designed flyers were distributed. Over 20 media outlets, included TV and newspapers provided coverage to efforts.

Letters stating our concerns were sent to all MPs in Canada, where as a result, two statements have been issued in our favour and a meeting has been held with the Deputy Secretary to the Foreign Affairs Minister.  Personal discussions have also been held with current and former MPs.

A Jalsa Seeratun Nabisa titled “Muhammadsa – The Astonishing Story of the Prophet” was held on November 20, 2012 in Downtown Toronto at the stunning Roy Thomson Hall. Over 2000 guests attended this premier event. Additional thousands viewed via live stream.

55,000 copies of the Friday Sermon have been printed and sent to all Parliamentarians and other dignitaries and contacts. More than 30,000 copies of the leaflet “The Holy Prophet Muhammadsa” are currently being distributed.

A 50-bus campaign was launched in central London on 29th October carrying the message ISLAM: Freedom of Speech with Respect. A new leaflet on Freedom of Speech has been published and 20,000 copies are being distributed.

5 lectures have been held on the Holy Prophetsa at major UK universities. 15 seminars were held by Lajna – the ladies auxiliary of the Community. 10 newspapers publications and 5 radio interviews were achieved. Several others seminars and exhibitions have taken place in libraries throughout the UK.

A special Seeratun Nabi conference was organised by Ahmadiyya Community in the United Kingdom at the Tahir Hall of the Baitul Futuh Mosque attracting Members of Parliament, dignitaries, professors, doctors, teachers and local residents.

3rd October 2012 was an “Open Mosque Day”. This day was celebrated in 80 branches of the Ahmadiyya Community in Germany. More than 6000 guests visited the Mosques of the Community. The prominent feedback was that this was the right way to react to this film.

According to initial reports, more than 25,000 printed copies of the Friday Sermon of 21st September 2012 have been distributed. More than 1000 people have read this sermon on the homepage of the Ahmadiyya Community Germany. More than 35 Seeratun Nabi functions, on the life of the Prophet Muhammadsa, have already been planned.

The press release on the sermon by His Holiness, consisting of quotes from the sermon, was sent to the media. Two online papers printed this PR in full and most local branches of the Ahmadiyya Community distributed it to the local media. 2 newspapers and a TV channel published interviews of representatives of the Jama’at on the topic of the film.

A major campaign is underway under the title “I LOVE MOHAMMAD” which will be worn as buttons or as a head band and flyers will also be distributed. The wearing of the slogan in any form would draw attention to the person who carries the pamphlets.

A large number of reprints of Life of Muhammad are in the works, for free distribution. The Friday Sermon of 21st September 2012 has been published in the form of 50,000 pamphlets and a coordinated distribution effort is being planned.

Life of Muhammad has been placed on iBookstore, Kindle store and iPhone. Muhammad the Liberator of Women on iBook, iPhone and Kindle.

29 different letters, opinion editorials and live interviews by members of the Ahmadiyya Muslim Community USA were published/broadcast in the US media in response to Innocence of Muslims.Links can be found below to a select few.

Maulawi Wahab Bin Adam, Ameer (National President) of the Ahmadiyya Muslim Community in Ghana and member of the National Peace Council of Ghana, wrote articles to illustrate the exemplary life of the Prophetsa in light of the 21st September Friday Sermon, that were published in the Daily Graphic, the Chronicle, the Ghanaian Times and the Daily Guide. A gist of the Sermon of 21st September 2012 was released to the Press and published in The Daily Graphic and The Ghanaian Times. In total the articles and press releases reached a readership of 145,000 people.

The press release of the Sermon and the article by Maulawi W. Adam were telecast on Ghana Television and GBC Radio. This is the only TV network and radio station with nationwide coverage the combined audience of both reaching 10 million people. Peace FM Station also broadcast the release, which has 50% coverage in Ghana.

20,000 copies of Friday Sermon of 21st September 2012 are being prepared for distribution. Symposia are being organised in Accra and 10 other regions of Ghana to present aspects of the life of the Holy Prophetsa to people from all walks of life.

The Friday Sermon was widely distributed amongst prominent dignitaries as well as ordinary citizens through literature and talks.

Toiman, chief of Himpunan Mahasiswa Islam (Islamic Student Association) said: “This is a very good outlook and the matter must be discussed so that every follower of all religions can think well rather than in an extremist way.”

Martin, chief of Komite Nasional Pemuda Indonesia (National Committee of Indonesian Youth): “Every leader of an organisation must have a standpoint regarding this [response to Innocence of Muslims]. Ahmadis have a very good standpoint. It is a very hard task for Ahmadis to explain to people the truth about Ahmadiyya, because people only get information from the media, which discredits Ahmadi friends.”

“It should be responded to in a good manner; not by extremism. Although we as Muslims are very angry, we should not respond with harshness. In the time of the Holy Prophetsa, a Bedouin urinated and spitted in the Prophet’ssa mosque. He was not killed, but was taught good manners. Although MUI has a separate opinion and standpoint to Ahmadiyya, but in this regard, we have the same view.”

60,000 leaflets in Urdu and English are being distributed all across India.

The numerous branches of the Ahmadiyya Community in India are also holding Peace Conferences. In Qadian, District Gurdaspur a major peace conference was held. Dignitaries as well as journalists were all invited and introduced to the beautiful aspects of the life of the Founder of Islam. Discussions were held on the means to peace and also on respect and regard for all religious leaders and holy founders.

The book Life of Muhammadsa is being translated into 9 regional languages of India and is being sent as gifts to libraries, politicians and prominent personalities etc.

Branches of the Ahmadiyya Muslim Community throughout India are holding Seeratun Nabi conferences to present the various aspects of the life of the Prophet Muhammadsa to non-Muslims.

An exhibition was organised called “ISLAM FOR PEACE” in which the life of Muhammadsa was presented.

On 23rd October an invitation was sent by Professor Meer Mubasher Ali of the Ahmadiyya Community to very prominent personalities and dignitaries at his residence in Dhaka. Among the invitees, there were an MP, an ex-minister and jurist, members of the intelligentsia, some human rights activists, advocates and lawyers of the Bangladesh Supreme Court and some senior journalists. They were shown the address by the Head of the Ahmadiyya Community at Capitol Hill on 27th June 2012 and were given a copy of the Friday sermon of 21st September. All received it very warmly and many commented by saying that this was a timely action on behalf of the Muslims by Hazrat Mirza Masroor Ahmadaba.

Copies of the Friday sermon and the address at Capitol Hill were sent to all 64 District Commissioners (DCs) and Superintendents of Police (SPs).

These endeavours are intensely being undertaken throughout Bangladesh. Just recently, the Inspector General of Prisons Brigadier General (Retd.) Ashraful Islam Khan, during a meeting with senior members of the Ahmadiyya Community, inquired about the Ahmadiyya belief regarding the Holy Prophet Muhammadsa. In response, he was given this 21st Sep. sermon and requested to discuss the matter in detail in order to understand the depth and sincerity Ahmadis hold with regards to the love of the Holy Prophet of Islamsa.

REFLECTIONS: This Day, the Establishment of a Worldwide Spiritual Community, and Commemoration of a Life Looking Towards Hope 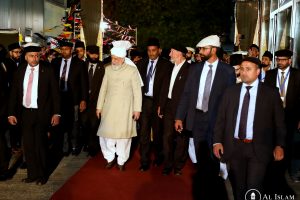