These powerful words were believed to have been said by one of the most renowned scientists of our time, Albert Einstein. The world has never seen so many means of mass destruction, with the potential of huge devastation, at the disposal of so many nations  and countries. It is estimated that the countries of the world possess 11,000 operational nuclear weapons today.1 The acronym “CBRNE” sums up the power of devastation that the world possesses; the term “CBRNE” includes Chemical, Biological, Radiological, Nuclear, and Explosive weapons.2 The destructive power of this technologically advanced arsenal, an increasing lack of empathy for fellow human beings and an overwhelming desire to pursue one’s chosen agenda at any cost, has made the devastation of the human race through a World War III (WWIII) an undesirable possibility.

The damage that a nuclear arsenal can cause to the human race is largely studied by scientists from the tragedies of Hiroshima, Nagasaki, Chernobyl and Fukushima nuclear crises. The devastation caused by the two atomic bombs in Hiroshima and Nagasaki is known to all. In the event of a nuclear attack, the power of the blast causes a destructive shock wave leading to collapsed buildings and  death in the immediate vicinity; this is followed by the generation of intense heat. This leads to fire-storms spreading to a wider area and then a fall of the nuclear debris and dust occurs, which is carried thousands of miles bringing about the devastation for ensuing decades.

The two nuclear bombs used in 1945 killed approximately 200,000 people, and were of modest nuclear capacity (15-20 kiloton).  The damage that can be done by 300-500 kiloton capability modern nuclear warfare is indeed unfathomable. The potential damage that can be caused by these deadly weapons has been estimated in recent scientific publications. An aerial strike with 500 kiloton multiple nuclear weapons to an average city will result in 1.5 million fatalities, 140,000 victims  with  third-degree burns and 24,000 with second-degree burns as an immediate aftermath.3 In addition, the nuclear aftermath of such an event will last for decades.

Nuclear radiation damages DNA, the building block of human lives, leading to short and long term harm to every tissue of the body.4  The exposure to one Gray (Gy)5 of radiation, leads to damage of the cells of the body which are particularly sensitive to the effects of radiation such as skin, bone marrow (which makes blood cells) and the digestive tract. The exposure to Beta radiation damages skin and Gamma radiation causes damage to the deeper tissue. An exposure to 2 Gy of radiation leads to depletion of bone marrow, thus reducing the body’s ability to fight infection. In the presence of burns and open wounds, lack of immunity can lead to overwhelming sepsis, adding to the death toll.

After the tragedy of nuclear bombs in Hiroshima and Nagasaki, the Life Span Study followed up 93,741 atomic bomb survivors for 60 years. This study confirmed that “radiation significantly increases the risk of death (22% at 1 Gy), cancer incidence (47% at 1 Gy), death due to leukemia (310% at 1 Gy), as well as the incidence of several non-cancer diseases (e.g. thyroid nodules, chronic liver disease and cirrhosis, uterine myoma, and hypertension). Significant effects on maturity (e.g. growth reduction and early menopause) were also observed.”6 However, no evidence was found showing that exposure to atomic radiation can lead to multifactorial inheritable diseases.7

The studies of nuclear disasters reveal that the radiation injuries were not limited to radiation exposure at the time of impact. However, radiation damage continues for a significant amount of time due to contamination. This contamination could be external, such as contaminant settled on the skin, or internal by ingestion, inhalation and absorption of radiation by open wounds. The radioactivity enters the food chain through radioactive seawater that contaminates fish. Furthermore, nuclear disasters can lead to massive ozone depletion, allowing more ultraviolet radiation to reach Earth, further increasing the risk of cancers.8

The debris and plumes from the nuclear war, soot and smoke from the fire-storm can produce so much smoke that temperatures would fall below those of the Little Ice Age (fourteenth to nineteenth centuries),  shortening the growing season around the world and threatening the global food supply.9 In a study of modelling the global impact of nuclear war, it was found that the use of nuclear arsenals in India and Pakistan, situated thousands of miles from the USA, would have significant climatic impacts upon agricultural crops (corn, soybeans, and winter wheat) in the United States.10

The world is aware that there would be no winners in a nuclear war.  “[F]or the World War III memorial I designed a futile, almost terrifying passage that ends nowhere.” Maya Lin, an American architectural designer and artist, well-known for excellence and depth in her work, has summed up the impact of WWIII on the human race. To emphasise the destructive nature of the Third World War, she came up with the tomb-like design, stating, “I came up with a political statement that was meant as a deterrent.”11

It is within the last few years that scientists have been able to forecast with a degree of confidence about a state of utter devastation that is planned, designed and can be inflicted by humans to their own race. The scientific evidence supports that nuclear war can potentially destroy life as we know it on earth within a short space of time. Its devastating effects will be seen on climate and those forms of life that survive the nuclear holocaust for decades afterwards. After such destruction it is inconceivable that the human race will ever be able to fight another war with anything other than crude weapons for many years thereafter. As Einstein stated, “with sticks and stones.”

Science is discovering now what has been revealed to divine reformers decades ago. The devastation that threatens the world because of its ever-increasing capacity for self-destruction has been foretold by the Divine Reformer of our age more than a century ago. The Promised Messiahas,Hazrat Mirza Ghulam Ahmad of Qadian,warned of a major calamity in these words: “Think not that earthquakes visited America and other continents but that your own country shall remain secure. Indeed, you may experience a greater hardship. O Europe, you are not safe and O Asia, you too, are not immune…I see cities fall and settlements laid waste.”12

The warning for such self-destruction has been highlighted by the successors of Hazrat Mirza Ghulam Ahmad, the Promised Messiahas. In his address at Wandsworth Town Hall, London, on July 28th 1967, the late Hazrat Mirza Nasir Ahmad, Khalifatul Masih IIIrh, warned the world of  the danger and consequences of WWIII.  Explaining that the prophecies of the Promised Messiahas about two World Wars have been fulfilled, he said that the Promised Messiahas also prophesied that a Third World War of even bigger dimensions would follow the second. The two opposing camps will clash with such suddenness that everyone will be caught unaware. Death and destruction will rain from the sky and fierce flames shall engulf the earth. The colossus of modern civilisation will tumble to the ground. The survivors shall stand aghast and amazed at the tragedy.13 The world has been continually warned ever since about the danger of  the impending Third World War by the successors of the Promised Messiahas. In an effort to raise the awareness of world leaders to the imminent danger of the nuclear war, His Holiness, Mirza Masroor Ahmadaba, Fifth Successor of the Promised Messiahas and worldwide Head of the Ahmadiyya Muslim Community, wrote letters to the heads of states of key countries urging them to play their role in prevention of the impending nuclear holocaust. In his addresses at the European Parliament, the House of Commons and Capitol Hill, His Holiness raised awareness about the need for absolute justice to prevent the Third World War.

The scientific evidence supports that nuclear war can potentially destroy life on earth as we know it, with its devastating effects that will be seen on climate and forms of life for decades afterwards.

It is fitting to conclude this brief overview with the words of Hazrat Mirza Masroor Ahmadaba:

“We can only pray and present the facts and realities in front of everyone in an effort and hope that the world can be saved from all forms of destruction and danger. This is essential so that we are not looked upon with anger and as transgressors by our future generations.”14

5.  Gray, a measure of radiation exposure.

10.  David Pimentel, and Michael Burgess, “Nuclear War Investigation Related to a Limited Nuclear Battle with Emphasis on Agricultural Impacts in the United States.” Ambio 41, no. 8 (December 2012): 894–899. 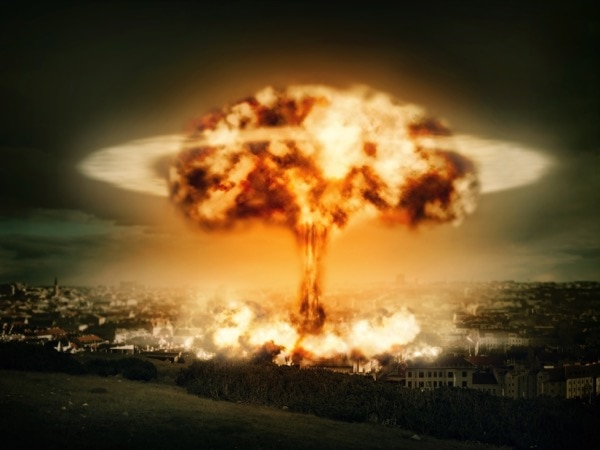 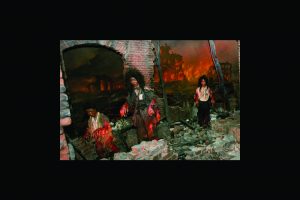 Syria in Crisis
The Critical State of World Peace
Comment