This month The Review of Religions features four keynote addresses from historic mosque openings in Germany. But as His Holinessaba has emphasised many times, it is important to remember that Islam guards the sanctity of all places of worship. So this month, as we celebrate the construction of new mosques, we also take an in-depth look at the houses of worship of other faiths: places where the name of God is often remembered and glorified. Read on to find out more…

The Ka’bah – The First House of Worship

According to the Holy Qur’an, the first house of worship was founded by Prophet Adamas in the heart of the Arabian peninsula, which is known today as the Holy Ka’bah:

Surely, the first House founded for mankind is that at Becca, abounding in blessings and a guidance for all peoples.1

With the passage of time, the Ka’bah was reduced to ruins and its religious significance was neglected.

However, God Almighty decreed that mankind should be united under one belief and raised Prophet Abrahamas, the patriarch of prophets:

And remember the time when Abraham and Ishmael raised the foundations of the House, praying, ‘Our Lord, accept this from us; for Thou art All-Hearing, All-Knowing.2

This universal message was revealed to the Holy Founder of Islam, Muhammadsa, and it contains the complete and perfect teaching to bring back mankind to the first House of Worship, established by God Almighty.

Whilst expounding on the great objectives of the Ka’bah, the third Head of the Ahmadiyya Muslim Community, Hazrat Mirza Nasir Ahmadrh stated:

The first objective of the House of Allah is that it is the first House of Allah which contains temporal and spiritual benefits for all mankind. It was built for the welfare of all the people, who, irrespective of the colour, race and difference of certain other distinctions which distinguish one from the other, would derive both material and spiritual benefits from this House.3

As with all other major world religions, worship is a key component of the Jewish faith, which takes place in a synagogue. The word synagogue is derived from the Greek word synagein, which means ‘to bring together’. In the Hebrew language it is also known as bet ha-tefilla, or the house of prayer. Traditionally, Jewish worship requires a minimum of ten adult males, known as a minyam. Therefore, although Jews do worship outside of the synagogue, there are certain prayers which must be performed in congregation at the synagogue.

Another function of the synagogue is signified by another common term used to describe it: bet ha-kneset, or the house of assembly, where the Jewish community congregate for social as well as charitable causes to serve the wider community.

In orthodox synagogues, the service is usually conducted in Hebrew and men and women sit separately. During the service, everyone must have their heads covered out of respect, except young girls.

A common feature in all the synagogues is the ark, which is a wooden chest that contains the Torah scrolls. The doors of the ark are ceremonially opened during the service and the particular passages chosen for that day’s reading are unrolled. While the doors of the ark are open, the congregation is expected to remain standing.2

The Greek word ekklesia, from which the word church is derived, was originally used to denote a gathering of people. In the Old Testament several references can be found that indicate ekklesia to mean any gathering for a religious purpose.

Despite persecution, the early Christian community began to spread the message of Jesusas and used facilities for the adherents, basing its essential features on the synagogue. With the passage of time the church slowly built its own identity and distinctive features.

The altar, symbolically regarded as the table used in the Last Supper, is used to hold the Bible alongside the wine and the bread. Another prominent feature of the church is the pulpit, an elevated platform from which the priest delivers the sermon. In addition to this, almost all churches feature a pew, a wooden bench where the worshipers can sit. Traditionally, it was designated for dignitaries, but later it was extended to all the members of the congregation.

Today, the church plays a significant role in society and is not only a place of worship, but is also used for serving members of the community through various charitable causes. Many churches regularly feed the homeless, provide shelter for the poor, and provide a variety of services to help the underprivileged.

The word mosque comes from the Arabic word masjid, which is derived from the root word sa-ja-dah (prostration), indicating a place where one prostrates. As a house of worship, it is open to all those who wish to pray to God. Indeed, in the time of the Holy Prophetsa, a Christian delegation from Najran performed their service inside a mosque, at his invitation.

The word indicates how central to Islam prayer is: Muslims are obligated to pray five times a day in congregation in the mosque.

Since the central focus is on prayer, mosques are built to minimise distraction: there are separate prayer halls for men and women and the inside of a mosque is free of images and paintings so that worshipers are not distracted. Key features that are found in almost every mosque are the mehrab, a semicircular chamber at the front of the mosque facing in the direction of the Holy Ka’bah in Makkah, where the Imam (person leading the congregation) stands for prayer. Other features include the dome and the minaret: a tall column where the muezzin (person who calls to prayer) would pronounce the azan (the call to prayer). In Islam, mosques are symbols that express the unity of God and project peace and harmony.

From the early history of Islam, mosques not only functioned as buildings for the worship and remembrance of God, they also served for the general welfare of mankind: as meeting places, for social gatherings, as centres of learning, for respite and even for essential water supplies. So, as mosques play a vital role in the community, the Holy Prophetsa emphasized the building of mosques and stated, ‘Of all buildings, the most beautiful and attractive in Allah’s Sight is a mosque.’

Speaking about the true objective of mosques, His Holiness, Hazrat Mirza Masroor Ahmadaba, the World Head of the Ahmadiyya Muslim Community, the Fifth Khalifah (Caliph), said:

A Muslim who offers his prayers with humility is a person who is kind, caring and merciful and who strives to stay away from immorality, illegal activity and all forms of evil. Rather than promoting disorder or division, Mosques are a means of bringing people together in humility for the worship of their Creator.1 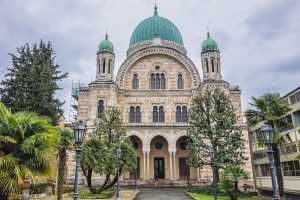 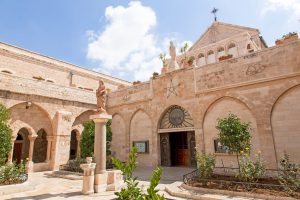 Places of Worship –Church of the Nativity

Pilgrimage: A Journey to the Holy Land
Why Religion Shouldn’t Be Pushed Aside at Work
Comment