The Annual Convention (Jalsa Salana) of the Ahmadiyya Muslim Community UK is a unique event that brings more than 35,000 participants from more than 110 countries to increase religious knowledge and promote a sense of peace and brotherhood.

While speakers discuss a range of religious topics and their relevance to contemporary society, the most distinguishing feature of this convention is that it is blessed by the presence of His Holiness Hazrat Mirza Masroor Ahmadaba, the Head of the worldwide Ahmadiyya Muslim Community, delivering four faith-inspiring addresses over three days. Journalist Sarah Linney attended Jalsa Salana for the first time and reflects on her impressions of this unique event.

The car crawled into the field at an impossibly slow pace, not because we were stuck in traffic, or mud, or even the interminable security queues (you think Muslims don’t fear terror attacks too?), but because about every 20 seconds the driver, Subby, would run into someone he just had to say hello to.

‘Assalaam alaikum! How are you?’ he would exclaim joyously, shaking hands and grinning, Arabic and English mingling as an almost continuous parade of friends knocked on the window excitedly.

The Jalsa – its name means ‘peace gathering’ – is the UK’s biggest Muslim convention, attended by almost 38,000 people from 114 countries and watched by tens of millions more on TV and online.

It is run entirely by volunteers, who transform a farm in Hampshire into a 200-acre festival site, with kitchens, food tents, exhibitions, accommodation, a bazaar, an international bookshop, radio and TV broadcasts and much more.

So what am I, an infrequent church attendee, doing at a Muslim event? I’ve been invited by my friends Faiza and Kaleem, who told me it was ‘their version of Glastonbury’ – and so, hoping I wouldn’t have to sit through a set by Ed Sheeran, I accepted.

This is the first thing you need to know about Ahmadi Muslims – they are super-welcoming and super-friendly. And, far from the stereotypical image of chauvinistic Muslim men who, we’re often told, view women as ‘second-class citizens’, I was treated like royalty.

There are shuttle buses between the site and Alton station, but Subby and a friend were sent to pick me up instead, which neatly got me out of possibly struggling to convince the bus driver that yes, this white-faced, blue-eyed blonde really was going to Jalsa. They brought me an umbrella, which I promptly managed to break, and opened the car door for me, perhaps afraid that I would break that too. On the back seat was a welcome sight after a long train journey – cans of diet Pepsi and mango juice.

On our way in, Subby talked to me about the charity work that the Ahmadi Muslims do, and how an important part of the festival is pledging their allegiance to the UK as well as to their religion. Later that afternoon the community’s spiritual leader, Mirza Masroor Ahmad, led a ceremony in which the UK flag and the Ahmadi flag are raised together.

‘Real Islam is helping the poor and serving the community we live in,’ Subby tells me.

Eventually we make it through the entrance, I go through security and Subby leaves me in the care of my guides for the day, Zain and Furqan. The site is divided into men’s and women’s sections, so they will show me round the men’s half.

I am surprised to discover that these two mature and intelligent young men are just 24 and 16 respectively, as they seem older and wiser. Zain also has a brilliant sense of humour and it isn’t long before he is mischievously mocking my terrible photography skills.

Our first trip is to the huge kitchens, where dozens of volunteers are hard at work mixing vast tubs of curry and dough. Even children, it seems, want to do their bit – a beautiful little boy called Hashim is helping with the procession of chapatis on the conveyor belt in front of me, made at the rate of 10,000 an hour. Over the three days of the festival, the volunteers will make 300,000 slices of bread and 270,000 meals.

There are 5,000 volunteers helping out at the festival in total – many of them high-flying professionals like doctors, nurses and even pilots (the man who drives me back to the station at the end of the day is an A&E doctor at a hospital in Kent, where I live). ‘There is a huge volunteering spirit – everyone wants to take part,’ Zain explains.

‘If all Muslims followed the teachings of their religion, no Muslim would ever be radicalised.’

Our next stop is a tent where I can learn more about the Ahmadi Muslim faith. Unlike other Muslims, Ahmadis believe Mirza Ghulam Ahmad, a 19th-century religious leader, was the Messiah whose advent was foretold by the Prophet Muhammad. Other Muslims believe the Messiah is yet to come.

Because of this, Ahmadis have often been persecuted in Muslim countries such as Saudi Arabia and Pakistan, where it is all but illegal to be an Ahmadi. Prohibitions on practising their religion, arrests, attacks and killings are commonplace. Some 2,387 Ahmadis have been arrested for religious practice in Pakistan since 1982, 256 have been killed, and 48 mosques have been destroyed.

Several of the people I meet over the course of the day will tell me, quite calmly, how their parents had to flee to the UK for their own safety. When I tell one woman how matter-of-fact she seems about it, she replies: ‘It’s everybody’s story.’

The Ahmadis’ motto is Love For All, Hatred For None, and the community has repeatedly spoken out against extremism and terrorism – Mirza Masroor Ahmad did so again at this year’s Jalsa. In the tent is a game of giant Jenga symbolising the concept of world peace. On each brick is inscribed an important tenet like tolerance and women’s rights; the idea is to show that if you remove just one of the bricks, one of the tenets, global peace collapses.

I also get to play a game where I work out which statements about Islam are true and which are misconceptions:

On our way round the site he, like Subby, bumps constantly into people he knows. Though there are 30,000 people here, it feels like everyone knows everyone else. There is an enormous community spirit and camaraderie, and I don’t feel like an outsider at all; I feel part of it.

And, quite by chance, the high point of my day comes when we walk right past one of my Twitter heroes, Qasim Rashid. A lawyer and Muslim scholar who has come all the way over from America for the conference, he is ultimately the person who brought my attendance about, as it was a Twitter conversation between us about Ramadan that led to me meeting Faiza and becoming friends.

To my astonishment, he remembers me and we take a picture together with our mutual friend Kaleem (also known as Chris – he is a Brit who converted to Islam). One tweet sent across the Atlantic Ocean, and suddenly here we all are together, celebrating peace and friendship on a farm in Hampshire.

Also among the guests are a number of prominent politicians – I spot Education Secretary Justine Greening and meet Lord Ahmad of Wimbledon without even realising. I think he talked to me about the weather. Richmond Park MP and former London mayoral candidate Zac Goldsmith is also there.

In search of a warming cup of tea after our wait for the flag-raising, Zain, Furqan and I head into the Humanity First tent where I can learn about the Ahmadis’ charity work.

Humanity First’s 30,000 volunteers work across the globe in areas including disaster relief, education, providing clean water, caring for orphans, healthcare and restoring sight. The charity provided relief in the aftermath of the Grenfell Tower fire, a number of recent earthquakes, including Nepal and Haiti, and the Bosnian conflict, which is when the charity was set up.

‘The tenets of Islam are for everyone. The only criterion is need,’ explains the charity’s implementation analyst Quddous Ahmed, one of only five paid staff at the charity’s UK headquarters in London.

‘We are on the front line right there with the Red Cross when there is a disaster. 97p in every pound raised goes to our projects.

‘People spend their holidays going to do this work. It’s about serving mankind and the love we have for mankind.

‘Painting a classroom, for example, has such a massive effect. At one school where we helped out, some of the kids who had left came back to study again just because the learning environment was so nice again. It was lovely to see their faces. And it cost just £100 as the only thing we used the money for were the supplies.’

Most of the funds come from the Ahmadis themselves, including the proceeds from selling merchandise at Jalsa and a telethon earlier this year which raised £2 million.

‘Our income is increasing every year, and so is our impact,’ Mr Ahmed added.

He quotes anthropologist and author Margaret Mead: ‘Never doubt that a small group of thoughtful, committed citizens can change the world; indeed, it’s the only thing that ever has.’

So what did I learn from my experiences at the Jalsa Salana?

It reminded me what a force for good religion can be. It’s certainly true that religion can be misused as an excuse for persecution and hatred – but it’s an overwhelmingly positive influence in the lives of these people, inspiring them to give huge amounts of their time and money to help others, and giving them faith, hope, gratitude and a love for humanity.

It reminded me how wonderful difference is – because there’s always something to learn from people who are a little different from you. Everyone I met exuded such positivity and cheerfulness that I resolved to be a little less negative and down on myself.

It reminded me that underneath our differences, we’re all the same as long as we know how to laugh and be kind. These people, almost all of whom I’d never met before, accepted me and laughed with me as if they’d always known me.

It reminded me of the power of the random encounter, something I’ve always strongly believed in. You never know where the most casual conversations and questions will lead.

And, most importantly, it reminded me of the importance of keeping an open mind. If I’d been scared of things that were different, I’d have missed out on an amazingly fun experience, a great many opportunities to learn, and new friendships with people who have helped me to be a better, happier person.

About the Author: Sarah Linney is a freelance journalist and the editor of news, features and opinion website The Loop (theloopjournalism.wordpress.com). She has previously worked for the Kent Messenger Group and Kent on Sunday, and as a freelance copywriter. 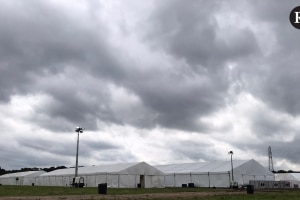