Whilst the world is engrossed in Boris Johnson’s (late) spring cleaning of the cabinet, just outside of London an influx of 40,000 Muslims is on a farm ready to pledge allegiance to a caliphate of peace and tolerance. The now famous chain of Greenpeace protesters blocking The Mall so that Boris’ entourage could not pass is quite contrary to the Muslim men dressed in black and white standing guard over the majestic union jack, symbolising loyalty and respect for their country.

What is all the ruckus you ask? These 40,000 Muslims convene every year at Jalsa Salana, the Ahmadiyya Muslim Community’s annual convention held in Hampshire, where parliamentarians, diplomats and royals from across the globe come to share their outlook on a more peaceful world. This is all followed by the keynote address by His Holiness Mirza Masroor Ahmad (aba), the worldwide head of the Ahmadiyya Muslim Community. Throughout the three days of Jalsa Salana, the guests get to meet old friends and make new ones, all in the spirit of brotherhood.

Having been declared heretics by the Pakistani government in 1974, the Ahmadiyya Muslim Community had no choice but to move its headquarters to the UK in 1984, where it is still established today. Their beliefs about the metaphorical second coming of Jesus (as) being fulfilled in 1889 by Hazrat Mirza Ghulam Ahmad (as) of Qadian in India, has resulted in widespread persecution of many Ahmadi Muslims. However, this persecution is not just limited to those living in Pakistan, it is carried out even in countries such as the UK, as the world has seen with the murder of Asad Shah.

But what is it that is pulling 40,000 Muslims from over 100 countries every year to Hampshire? Many people who have never seen the Caliph before get the opportunity to pledge allegiance to him in the name of peace. Whilst doing so, they achieve a certain spiritual aggrandisement through being in the company of a divinely-inspired leader who has been guiding the entire world towards unity. However, catering for this many people on a village farm in the rolling hills of Surrey is no easy task. Entirely funded and organised internally, the Jalsa has proven to be a success through the sheer dedication of a 7,000-strong volunteer force.

Having attended every Jalsa since my birth, it is unequivocal to say that there was passion and zeal in every single volunteer who were pivotal in the success of the three-day event. From 4-year old kids serving water to guests to fully qualified doctors scrubbing the loos. When it comes to Jalsa Salana, everybody chips in to make it the success it is. An atmosphere of brotherhood, compassion and empathy is created from the constant keenness to help from all of the attendees.

Danish Khurram, a young British trainee Imam, spoke to The Review of Religions regarding his volunteering in the hygiene department. He said,

‘scrubbing the toilets and litter-picking is not the cleanest job in the world but someone has to do it. It has taught me compassion, humility and dedication. It also teaches me that everyone is equal, all doing their part to achieve the bigger picture.’

There are thousands more like Danish who share this outlook. From the entire car park work force standing hours in the ‘Glastonbury-esque’ conditions to smoothly manage the traffic of tens of thousands of cars, to the electricians ensuring the lighting is working in every tent. Throughout the year, many have respectable day jobs but the fact that they are prepared to drop everything in the weeks running up to the Jalsa shows the equality that it embodies. No matter where you are from or how much you earn, everybody is equally crucial for the success of the event.

On many occasions, the Caliph of the Ahmadiyya Muslim Community, His Holiness Hazrat Mirza Masroor Ahmad (aba), has spoken about the path on which this world is headed. And that on account of the lack of sympathy, compassion and humility between the world’s super powers, the likelihood of nuclear conflict has increased. Having said this, the importance of these qualities being inculcated from a young age becomes discernible; children from impressionable ages adopt these qualities and attributes that are integral for them to become practical custodians of society.

This is what Jalsa Salana offers to the thousands of Ahmadi Muslims who pledge their time every single year. It crafts a society that can truly prosper whilst easing out of the status quo. The sense of responsibility that is instilled in the volunteers is imperative for them to pick up the reigns of the progression of mankind. The state of our current political climate is hard to change from the top, we find ourselves in a case of dramatic irony, watching the world walk into a fiery doom. This is why events like Jalsa Salana are doing their part in producing a brighter society. 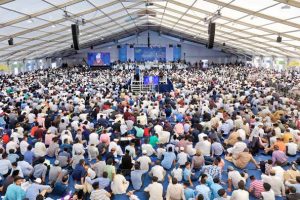 Demystifying the Mysteries of The Shroud with Bruno Barberis
Inspired by Al-Qalam: The Man Who Escaped Death and Wrote an Entire Qur’an
Comment