For over 15 years His Holiness, Hazrat Mirza Masroor Ahmad, the worldwide head of the Ahmadiyya Muslim Community has been advising the world’s leaders of the need for absolute justice as the guiding principle of national policies and international relations. Inspired by the message of His Holiness and to spread it as widely as possible, campaigns have been launched including the latest initiative by the Ahmadiyya Muslim Association UK named #StopWW3.

Through international media, public events and face-to-face meetings, this community, whose aim is to reconnect mankind with God/its Creator, has warned repeatedly that failure to do this will lead the world to the cataclysm of a Third World War.

Ahmadi Muslims have achieved fantastic progress in raising awareness of both the need for and the true means of achieving world peace.

‘Conflicts continue to ignite and burn throughout the world and so let us not be in any doubt that the shadow of a fateful war looms before us.’

The Ahmadiyya Muslim community has stepped up to these turbulent times to become global ambassadors of peace. They have organised a worldwide Stop WW3 campaign.

This powerful social activism campaign led by the Outreach and Public Relations Department of the Ahmadiyya Muslim Community UK is beginning to advance at a rapid pace on social media.

On Saturday, the 8th of June 2019, Ahmadi Muslims of Britain campaigned in their hundreds in front of Parliament in London. Their hearts were filled with a burning zeal and positivity to help humanity by dynamically bringing their latest campaign of #StopWW3 to the forefront, not only to the nation’s leadership but to the tourists, shoppers and passers-by in the capital.

Wearing distinctive campaign T-shirts they spent the day waving banners, distributing thousands of leaflets, and chanting slogans for global peace. The members of the public joined them and engaged the Ahmadi Muslims in enthusiastic conversations about what they as the British people could do to keep the world away from impending doom.

One member of the public commented on the campaign, saying:

‘The “#StopWW3” campaign is something that concerns all of us, every person of the world! Not just the Ahmadi Muslims, and I know the Ahmadis stand for peace! We all need to get back to basic values of living in peace with each other, not sniping at each others’ borders, and sailing ships into other people’s borders, amassing huge amounts of money for weapons, weapons to attack not protect, and using money that can be used to help the lives of people. And His Holiness [Hazrat Mirza Masroor Ahmadaba, the world-wide Head of the Ahmadiyya Muslim Community] is right to say stop World War III and he’s been saying it for several years.”

The #StopWW3 campaign has included a national billboard drive, bus adverts, catchy social media artwork and good-old leaflet distributions to try and [shake] alert the nation towards taking action on this critical issue challenging us all.

Anyone who watches the news on a regular basis can see the dire political, social and cultural situation that almost all nations are suffering from, including the West.

No one is offering a viable solution nor is there any practical progress visible on the horizon. On the contrary, ever-more racist, divisive and bigoted rhetoric is being spread throughout all media platforms.

This deliberate strategy by the intolerant and ill-mannered leadership is purposefully throwing fuel on the fire created by terrorists, be they white far-right extremists or inhumane international extremists who hide behind the good name of religions to achieve their political ends.  Unrest grows as society splits into warring groups because of fear of skin colour and religion.

Over-exaggerated and distorted ‘nationalistic’ tendencies, as last seen in the Fascist and Nazi era, are again taking the world to the brink of a self-imposed destruction. Except this time there are nuclear weapons at the disposal of reckless leaders.

Indeed, it is the Ahmadiyya Muslim Community’s leader, His Holiness Hazrat Mirza Masroor Ahmadaba who has been calling world leaders to act with absolute justice and tolerance in the last decade,  by delivering speeches on the importance of peace to the US Congress, the EU and UK parliaments. In addition, he has written individually to world leaders, warning them of the consequences if they continue to pursue self-interest over the global good.

‘Storm clouds forewarning of a third world war are getting heavier by the day.’

This foretelling of an imminent third world war is not new in the Ahmadiyya Muslim Community. In 1905, the Founder of the Ahmadiyya Muslim Community, the Promised Messiah, Hazrat Mirza Ghulam Ahmadas warned the world of a calamitous global war that would topple the Tsar of Russia and usher in a new social order. His prophetic words found fulfilment a decade later in the Great War of 1914-1918.

The inspirational message of the #StopWW3 campaign is for each of us to come together, to take action,  to not be silent or divided in our endeavour for peace and justice. It is clear that those who are presently piloting the direction of our world are taking it towards chaos and disorder – we must help them to change course.

‘Every person, in every part of the world, needs to take individual responsibility towards establishing peace.

So we invite you to join this important campaign to be part of something that will bring about global justice, honesty and love not only in our age but also for our future generations. Please contact True Islam by email or Twitter to get involved and make your mark in serving humanity.

About the Author: Zubair Ahmed Hayat- holds an Undergraduate Degree and Masters Degree in English Literature from London, currently serving in The Review of Religions as Head of Design and Head of Video Production. 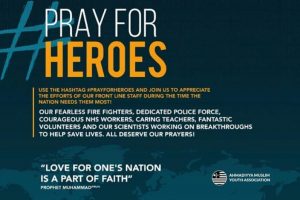 The Muslims ‘Praying for Heroes’ But is that enough?

The Caliph and 116 Trainee German Imams

#IAmAMuslim Listen To My Song – Social Experiment
Untold Story Special: How the Caliph Adorned the Mubarak Mosque With the Names of God
Comment