The Khilafat of Hadhrat Mirza Bashir-ud-Din Mahmud Ahmad(ra), the second successor of the Promised Messiah(as) spanned over half a century during which time the Ahmadiyya Muslim community became firmly established. During this period the significance and importance of Khilafat became firmly rooted within the community. Huge steps were taken in the propagation of the message of Islam; missions were set up in many parts of the world, the Holy Qur’an was translated into several languages; the blessed schemes of Tahrik Jadid and Waqf Jadid were initiated and the administrative foundations of the community were strengthened. Throughout the tenure of Khilafat the Khalifa provided spiritual guidance, as well as guidance on secular matters, through his sermons, writings and instruc-tions. To comprehensively describe all the achievements that occurred during the Second Khilafat of Ahmadiyyat is an enormous task and in this article we can only attempt to highlight a few aspects.

The Prophecy relating to Musleh Maud (the Promised Reformer)

Hadhrat Mirza Bashir-ud-Din Mahmud Ahmad(ra) was the son of the Promised Messiah(as) and was the Musleh Mau’ood. He was born on 12 January 1889. His birth had been previously prophesied.

‘God Almighty, the Lord of Honour and Glory, Merciful, Benevolent, Exalted, Who has power to do all that He wills (glory be to Him and exalted be His name) has vouchsafed to me the following revelation.

‘I confer upon thee a sign of My mercy according to thy entreaties and have honoured thy prayers with acceptance through My mercy and have blessed this thy journey. A Sign of power, mercy and nearness to Me is bestowed on thee, a Sign of grace and beneficence is awarded to thee, and thou art granted the key of success and victory. Peace on thee, O victorious one. Thus does God speak so that those who desire life may be rescued from the grip of death, and those who are buried in the graves may emerge therefrom, so that the superiority of Islam and the dignity of God’s Word may become manifest unto the people, and so that truth may arrive with all its blessings and falsehood may depart with all its ills; so that people may understand that I am the Lord of Power and so do what I will and so that they may believe that I am with thee, and so that those who do not believe in God and deny and reject His religion and His Book and His Holy Messenger, Muhammad the chosen one, on whom be peace, may be confronted with a clear sign and the way of the guilty ones may become manifest.

‘Rejoice therefore, that a handsome and pure boy will be bestowed on thee. Thou wilt receive an intelligent youth who will be of thy seed and will be of thy progeny. A handsome and pure boy will come as your guest. His name will be Emmanuel and Bashir. He has been invested with a holy spirit, and he will be free from all impurity. He is the light of Allah. Blessed is he who comes from heaven. He will be accompanied by grace that shall arrive with him. He will be characterised by grandeur, greatness and wealth. He will come into the world and will heal many of their ills through his Messianic qualities and through the blessings of the Holy Spirit. He is the Word of Allah, for Allah’s mercy and honour have equipped him with the Word of Majesty. He will be extremely intelligent and understanding and will be meek of heart and will be filled with secular and spiritual knowledge. He will convert three into four. It is Monday, a blessed Monday. Son, delight of the heart, high ranking, noble; a manifestation of the First and the Last, a manifestation of the True and the High; as if Allah has descended from heaven. His advent will be greatly blessed and will be a source of the manifestation of Divine Majesty. Behold, a light cometh, a light anointed by God with the perfume of his pleasure. He will pour His spirit upon him and he will be sheltered under the shadow of God. He will grow rapidly in stature and will be the means of procuring the release of those held in bondage. His fame will spread to the ends of the earth and people will be blessed through him. He will then be raised to his spiritual station in heaven. This is a matter decreed…’(Announcement of 20 February 1886)(1)

In an announcement on 22 March 1886, the Promised Messiah(as) stated:

“This is not only a prophecy, it is a grand heavenly Sign, which Almighty God has shown for demonstrating the truth and greatness of the gentle and compassionate Prophet, Muhammad, the chosen one, peace and blessings of Allah be upon him and his people”(2).

In this announcement he also added that the Promised Son would be born within a period of 9 years.

The first child born shortly after the prophecy was a daughter. Some opponents ridiculed the prophecy by suggesting that the prophecy had not been fulfilled. However, since this daughter was born within a few months of the prophecy, it was quite clear that the prophecy referred to another child yet to be born and not one that had already been conceived on the date of the prophecy. Later a son, Bashir Ahmad, later known as Bashir Awwal, or Bashir I, was born on 7 August 1887 but he died on 4 November 1888. At the death of this son the opponents of the Promised Messiah(as) once again criticised the truth of the prophecy. At this point the Promised Messiah(as) wrote a small leaflet on 1 December 1888. In this announcement, the Promised Messiah(as) explained that the words in the announcement of 20 February 1886 “A handsome and pure boy will come as your guest…  He is the light of Allah. Blessed is he who comes from heaven” referred to a short life, a guest who stays for a few days and then departs(3). He explained the true meaning of the prophecy and stated emphatically that the Promised Son would be born within the stipulated period of 9 years from the date of its first pronouncement of 20 February 1886. This explanatory leaflet which reiterated the glad tidings of the birth of the Promised Son was printed on green paper and is often known as ‘Sabz Ishtihar’ (green leaflet).

By the Grace of Allah, the Promised Messiah(as) was blessed with a son, Hadhrat Mirza Bashir-ud-Din Mahmud Ahmad on 12 January 1889.

At the time when his father, the Promised Messiah(as), passed away on 26 May 1908, he was only 19 years old. Hadhrat Sahibzada Mirza Bashir-ud-Din Mahmud Ahmad recalls:

When Hadhrat Mirza Bashir-ud Din Mahmud Ahmad(ra) was only 25 years of age, upon the demise of Hadhrat Maulawi Nur-ud-Din Khalifatul Masih I, he became Khalifa on 13 March 1914 and thus became the second successor to the Promised Messiah(as). It was not however until January 1944 that he formally stated that he was the subject of the prophecy of the Promised Son.

Even before his election as Khalifa, Hadhrat Mirza Bashir-ud-Din Mahmud Ahmad(ra) was actively serving Ahmadiyyat. At the young age of 17 he formed Tashheedh-ul-Adhhan. This was a literary cell aimed at the youth of the Community and under which a magazine of the same name was published. The magazine was devoted to the explanation and promotion of spiritual values. In 1911, with the permission of Hadhrat Khalifatul Masih I(ra), he founded the Anjuman Ansarullah. In 1912 he travelled to Egypt and then to Makkah to perform the Hajj. In 1913 when he was only 24 he also started a weekly paper, Al-Fazl which went on to become a regular daily  publication of the Ahmadiyya Community. Hadhrat Mirza Bashir-ud-Din Mahmud Ahmad(ra) was himself the first editor.

Hadhrat Mirza Bashir-ud-Din Mahmud Ahmad(ra) received his primary education in a school in Qadian and then in the Talimul Islam High School when it started in 1898. Because of persistent ill-health, he could not do well and his academic career came to a halt when he failed his Matriculation at the end of March 1905.  He learnt the Holy Qur’an and Ahadith from Hadhrat Maulawi Nur-ud-Din(ra). In 1907, an angel taught him the commentary of Surah Fatiha, the first chapter of the Holy Qur’an, the gist of which he was able to transcribe in his commentaries. 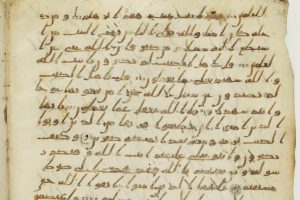 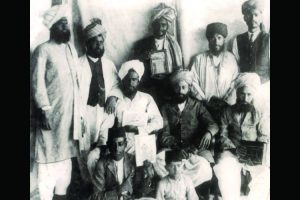