Born in 1841 in the ancient town of Bhera, Shahpur district, Punjab, Hadhrat Maulawi Nur-ud-Din(ra) was the youngest of nine children. His father, Hafiz Ghulam Rasul and Noor Bakht, his mother, were both great lovers of the Holy Qur’an and set their children excellent examples of piety and rectitude. His father and at least ten of his immediate male ancestors had committed the entire text of the Holy Qur’an to memory. He was affluent and spent large amounts in procuring the Holy Qur’an from South India and distributed them free.

Hadhrat Maulawi Nur-ud-Din(ra) was the 34th in direct male lineal descent from Hadhrat ‘Umar(ra), the second successor to the Holy Prophet Muhammad(saw). He was thus a Qureshi, Hashimi Farooqi. In addition to his paternal heritage, his maternal heritage reached a high degree of nobility. She was an A’waan believed by historians to be the descendants of Hadhrat ‘Ali(ra). Thus Hadhrat Maulawi Nur-ud-Din(ra) was an A’waan as well as a Farooqi.

His mother instructed children in the neighbourhood in the translation of the Holy Qur’an in Punjabi and in elementary studies of Islam. She was similarly his first teacher. He often related in later life that he had heard the Qur’an recited by his mother while he was in her womb and had imbibed the love of the Qur’an with his mother’s milk.

His father was very affectionate towards his children and cared immensely for their intellectual nourishment. He thus paid a lot of attention towards the educational needs of his children.

At school, Hadhrat Maulawi Nur-ud-Din(ra) was a model pupil. A formidable intellect, a remarkable memory and a cultured family background all combined to positively influence and refine his early education. Like all promising and deserving pupils, he enjoyed plenty of spare time with his teachers. He held his teachers in great esteem and never failed to honour the huge debt of gratitude he owed them. As Allah willed, Hadhrat Maulawi Nur-ud-Din(ra) attained to great eminence in his life but he would always mention every one of his teachers with great veneration and deep gratitude.

As a child, he was always averse to obscene language and in his company his playmates were duly cognisant of this. Swimming was a favourite hobby and he often went swimming in the Jhelum River, even in winter days. He was also fond of riding.

From his earliest childhood, Hadhrat Maulawi Nur-ud-Din(ra) developed a love for knowledge and learning, and began to collect books. He writes in his autobiography:

“I had a fascination for the collection of books. When I was a child I used to collect books of fine and beautiful covers. When I entered an age of understanding, I used to select books with a great deal of care.”1

Punjabi was his mother tongue but once he heard Urdu being spoken, he became enamoured with it and duly learnt it. Once fluent in Urdu he became eager to read books in Urdu. He came across Urdu books written by the members of the family of the celebrated Shah Wali Ullah of Delhi and benefited immensely from a study of these books.

On his return to Bhera, he pursued his study of Persian at the hands of Haji Miyan Sharfuddin. His eldest brother, Maulawi Sultan Ahmad, also started him on a regular course of Arabic and thus young Nur-ud-Din learnt Arabic at his hands. By the prime of his youth, therefore, Hadhrat Maulawi Nur-ud-Din(ra) was proficient in Punjabi, Urdu, Persian and Arabic.

He had learnt from his mother the reading of the Holy Qur’an and at sixteen, he obtained an Urdu translation of five principal chapters of the Holy Qur’an. Around this time also he received from Bombay two copies of Urdu commentaries on portions of the Holy Qur’an namely, Taqwiyyatul Iman and Mashariqul Anwar. He promptly began a diligent study of the Holy Book by way of these translations and two books of commentary. Thus was laid the foundation of his immense devotion to the Holy Qur’an which became a dominant passion of his life and which was to sharpen his faculty of spiritual discrimination. Soon, he also began to have experience of true dreams, which further contributed towards the development of his spiritual perceptions.

At seventeen, he began his study for the diploma in education at the Normal School in Rawalpindi. He did so well in his studies with the aid of very willing private tutors that at the end of the four-year course, he had acquired a mastery of a wide range of subjects. He went on to do so well in his diploma examination that though he was merely twenty-one years old, he was appointed headmaster of a school in neighbouring Pind Dadan Khan, an office he held for four years.

Hadhrat Maulawi Nur-ud-Din(ra), however, was to remark later that the tearing up of the diploma was a turning pointing in his life and opened up vistas of Divine bounties unto him.

• Hakeem Noor-ud-Deen, The Way of the Righteous, by Syed Hasanat Ahmad. 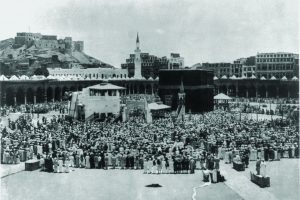 Hajj – In the Eyes of the Caliph