There seems to have been a considerable amount of adverse reaction to the wearing or display of religious symbols in recent years including ministerial comments, new corporate policies and even legislation. This has ranged from opposition to the wearing of crucifixes by Christians, bracelets and turbans by Sikhs, skull-caps by Jews and headscarves by Muslim girls and women.

A recent ruling by the European Court of Human Rights on a case in Italy where a school had a Catholic crucifix on display went against the school on the grounds that the school had violated religious and educational freedoms. Elsewhere, France, Belgium and Turkey have banned headscarves for Muslim girls and women, and there have been individual cases raised in the UK against Islamic dress and the wearing of Sikh articles. A UK-based female airline worker at British Airways was forced to remove a Christian symbol as it might offend travellers.

Even senior politicians have joined in the debate on whether or not religious symbols have a place in the public domain. Concerning the wearing of turbans in France by Sikhs, French President Sarkozy addressed Indian Prime Minister Manmohan Singh by saying:

How bizarre. Nobody seems offended when people wear t-shirts with provocative or vulgar messages. Nobody seeks legal redress when abused by opposing fans at a sports event. This seems to be taking human rights to an extreme. Just because a symbol is shown somewhere in the modern age does not mean that someone is compelled to adopt that religion, or to accept the views represented by that symbol.

For a religious person, the wearing or not wearing of a symbol should not affect their faith. For example, a Muslim may function without a cap in daily chores but would expect to wear a cap when praying. A Christian would not stop being a Christian if forced to remove a crucifix. Faith schools could equally function perfectly well without minarets, candelabras or crucifixes.

However, some aspects of clothing go beyond that. For example, people of all faiths would find it offensive to be in public without modest attire. For Muslim girls and women, not wearing a headscarf falls under this category, and for a woman accustomed to wearing a headscarf, being forced to operate without it and similarly for a Sikh man forced to remove his turban would result in a feeling of nakedness.

In actual fact, it is often people of faith who show the most tolerance due to their religious beliefs. They are encouraged to show respect for others. Their history is full of examples of prophets who were tortured and yet endured hostility with patience. Their faith teaches them to love their neighbour, shun abusive language and be charitable and helpful in society. Surely, with recent events in mind, society needs more people with a moral backbone.

And what does the alienation of peace loving people on the grounds that they wear a turban, headscarf, skull-cap or crucifix say about the values and tolerance of modern secular society? A swastika is fine, but a crucifix is not?

There is a fine balance to be drawn, but society should look more at people’s behaviour rather than their clothing or symbols. 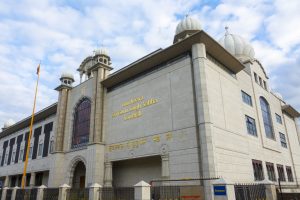