In today’s sermon His Holiness (aba) stated that on 23rdMarch, the Promised Messiah (as) formally took the bai’at [pledge of allegiance] and established the Ahmadiyya Muslim Community. His Holiness said that this day is commemorated in the Jamaat as the ‘Promised Messiah Day’ and various gatherings are held in various Jamaats around the world. Owing to the current pandemic, perhaps these gatherings will not be held, therefore, in addition to this sermon, various others programmes will be show on MTA, which all Ahmadis should try to watch.

His Holiness (aba) then said that the Promised Messiah (as) came in complete subservience to the Holy Prophet (sa) in order to further his mission and to propagate the message of Islam in the world.

His Holiness stated that he would present extracts from the writings of the Promised Messiah (as) which expound upon the purpose and objectives of his advent.

His Holiness stated that in one of his gatherings, the Promised Messiah (as) stated: “Finally, let it be clear that my advent in the present age is not for the reformation of the Muslims alone, but I have come to reform the people of all the three religions: Muslims, Christians and Hindus. Just as God has appointed me the Promised Messiah for the Muslims and Christians, so am I the Avatar for the Hindus.”

Further quoting from the Promised Messiah (as)’s writings, His Holiness stated: “For the past twenty years or so, I have been proclaiming that just as I have appeared in the spirit of the Messiah son of Mary (as) as for the purpose of removing sins which have filled the earth, so have I come as Raja Krishna—one of the greatest Avatars of the Hindu faith. In other words, I am the same person by virtue of spiritual reality. This is no fancy or speculation on my part. The God of heaven and earth has revealed to me, not once but a number of times, that for the Hindus I am Krishna and for the Muslims and Christians I am the Promised Messiah.”

In light of the recent coronavirus pandemic, His Holiness presented some opinions of the secular world who have commented on this outbreak. His Holiness quoted Philip Johnston who published a column in The Telegraph and mentioned that one of the most popular movies currently being streamed on Netflix is Contagion, which revolves around the spread of a virus and desperate attempts are made to control the disease, loss of social order and ultimately finding a vaccine to halt its spread. The journalist further stated that it is extraordinary to think that within the space of two weeks, the world has been turned completely upside down. In his article the journalist concluded: “How many times have we heard people say: ‘Everything will be OK because scientists will work something out’, whether it be global warming or the pandemic? We are about to find out whether such optimism is justified. If it isn’t then I might be heading back to church.” Similarly, His Holiness quoted several other journalists.

His Holiness then said that this virus has compelled world to turn towards God, however, it is Islam alone that presents a True and Living God.

His Holiness then stated that the government has now issued stricter measures. One ought to adhere to the guidance issued by the Government. The elderly and those who are vulnerable with underlying conditions ought to be particularly careful. The elderly ought not to leave the house and this is also the advice given by the Government. His Holiness then stated that the Friday prayers ought to be offered in one’s local area and seeing the attendance in the mosque, it seemed that many had done so. Doctors have advised that in order to strengthen the immune system one ought to rest and ensure they have adequate sleep. It should not be the case that one is awake until late watching films etc and consequently misses the morning prayer. Likewise, they would leave for work with insufficient sleep, leading to weakness.

His Holiness then said to avoid eating from outside and also foods which contain preservatives, such as crisps, are particularly damaging for health. Doctors are also advising to drink plenty of water, and to wash one’s hands regularly. His Holiness stated that he previously reminded the members to ensure cleanliness and hygiene.

His Holiness stated that the ultimate solution is prayer and that one ought to pray for Ahmadis and the world in general. May Allah grant cure to those who are suffering. May Allah enable every Ahmadi to increase in their faith and conviction.

Friday Sermon Summary 13th August 2021: ‘Blessings of the Jalsa Witnessed Around the World’ 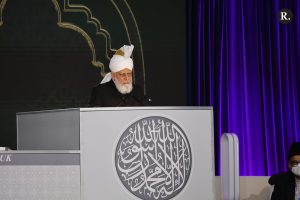