Translated by Zafir Mahmood Malik for The Review of Religions translation team.

With the Mercy and Grace of God Almighty. He is The Helper.

The permissibility of whether one ought to travel for Hajj [this year] is currently a contentious issue. Various people have been publishing their opinions on this matter and the Muslim political leaders of the Indian subcontinent have insisted on sending ships for Hajj this year. Thus, it is necessary that I also express my opinion on this matter for the guidance and counsel of the Ahmadiyya Jama’at, to save members of our community from any unnecessary grief and pain. Also, so that those people who have a favourable opinion of me – and their number is not small – are not deprived of this sincere advice.

From the outset of my treatise, I would like to inform all my friends that performing the Hajj this year is akin to placing oneself in a trial.  Moreover, in accordance with the dictates of the shariah [Islamic law], it is better to postpone the decision to travel for Hajj this year. It ought to be remembered that Hajj is not an obligation which must be fulfilled unconditionally; rather, it is only obligatory at certain times and for certain people when the required conditions are fulfilled. Among these is safety [of the route]. Allah Almighty states in the Holy Qur’an that Hajj is incumbent upon the one who has the means to reach Makkah. In other words, they have the funds to travel to and from Makkah, they can leave enough provisions behind them for their families, they can travel safely, they are in good health and they can bear the hardships of the journey, and so on and so forth. Since the journey this year to the holy city of Makkah is extremely perilous, I believe that it is, therefore, not compulsory for the people of the Indian subcontinent – or those from other countries who have to travel by ship to the holy city of Makkah – to go for Hajj. Instead, it is better to postpone it.

Man does not know the unseen and we cannot say what the future holds; however, my verdict is rendered in light of the current circumstances, which are dangerous for the pilgrims.

This verdict of mine is in light of the following factors:

Currently, Sultan Ibn Saud is at war with Sharif Ali bin Hussein, the ruler of the Hijaz, and despite all efforts, neither group has shown any willingness to postpone the war. Therefore, it is quite possible that the pilgrims will have to suffer as a natural consequence of this conflict, which would be personified by the proverb:

If two armed warriors set out to annihilate one another, it is not at all difficult to imagine the dangers suffered by a helpless unarmed group that is caught in the crossfire. Thus, in the presence of such a conflict, it is not permissible to travel for Hajj.

The present situation of Hijaz is that Sultan Ibn Saud, the Sultan of Najd, has seized control of the holy city of Makkah. Sharif Ali, the King of the Hijaz, controls Jeddah and most of the coastal regions. The army of Sultan Ibn Saud has besieged Jeddah and they are trying their utmost to ensure that Sharif Ali is unable to form ties with the bellicose tribes of Hijaz, lest he is able to strengthen his army. Sharif Ali has a small army and the majority of his commanders are Syrians who were part of the former Ottoman army and had studied the art of combat in Ottoman academies. One part of Sharif Ali’s army are Syrians, whereas the rest of it are members of the tribes of the Hijaz. Whilst in Jeddah, they are trying to prevent any grain, which usually arrives by the sea, from reaching the holy city of Makkah and its environs, so that the Sultan of Najd would become frustrated and abandon the siege. Furthermore, they hope that, owing to the famine that will result from this, people will lose hope in the rule of the Sultan of Najd and that after abandoning him, they will join Sharif Ali. Since the traditional route to Hajj passes through Jeddah, it is virtually impossible to travel through this route.

However, aside from this route, there are other possible routes as well, one of which is Rabigh, the old seaport of the holy city of Makkah. In the time of the Holy Prophet (sa), the Makkans would use this seaport to travel across to other countries. And the companions (ra) used this port when they migrated to Abyssinia, or according to some narrations, they travelled via Yemen. Rabigh is situated at a distance of five manzils [a manzil is a day’s journey] from the holy city of Makkah and under normal conditions, one is able to travel from Makkah to Rabigh in five days. Rabigh, as well as two other seaports are controlled by Sultan Ibn Saud and this is why ships carrying pilgrims are being encouraged to go to Rabigh so that they can reach Makkah easily. However, proponents of this are overlooking the following points:

The news of a pact between Shaikh al-Sanusi [2] and Sultan Ibn Saud has further strengthened Sharif Ali’s cause because Italy has now directed its support towards him. Massawa, which is the territory of Italy [3], is situated across from Rabigh where Italian ships are stationed for the protection of its territories. Without disclosing the fact that they are supporting Sharif Ali, these ships can gather information about the incoming ships to Rabigh via the Red Sea and inform Sharif Ali in a timely manner. Italy has already provided a vast amount of military equipment for the Kingdom of Hijaz. Thus, given these circumstances, the ships carrying the pilgrims will be in grave danger.

I do not say that, because of these circumstances, it is impossible for the [pilgrim’s] ships to reach the port. Despite facing the most advanced fleets with highly skilled naval commanders, some ships can still evade capture by some ploy. Nevertheless, in such circumstances, the dangers associated are increased greatly and thus, placing one’s life in danger and going for Hajj is against the commandments of the shariah.

In actuality, this year’s Hajj has become politicised. The only reason Sultan Ibn Saud has exhausted all his efforts to ensure that the Hajj takes place is because if the Hajj does not take place this year, he would not receive the 150,000 to 200,000 maund [4] of provisions that usually arrive because of Hajj. This would be very detrimental to him. Secondly, since Sultan Ibn Saud does not have any ties with the outside Islamic world, he will be able to form ties with Muslims from all over the world through the Hajj.

Thirdly, the people of Makkah and surrounding tribes make their annual income during the Hajj season. If the Hajj does not take place, their circumstances will become straitened and this burden will fall upon the Sultanate of Najd. If the administration is unable to support the people, then there will be a wave of unrest throughout the country the likes of which they will be unable to control. Thus, Sultan Ibn Saud is exhausting all his efforts to ensure that people go to perform Hajj so that the grain can reach Makkah, people are able to make their livings, and so he can garner the support of the Islamic world.

The Muslim leaders of the Indian subcontinent are also promoting the Hajj for purely political reasons. They are opposed to Sharif Ali, because he was the one who had fought against the Ottoman Turks the most. The Muslim leaders are aware that if the Hajj does not take place this year, the power and influence of Sharif Ali will grow significantly. Sultan Ibn Saud is reported to support the Turks; however, previously, he had been a staunch enemy of the Turks. If, in the present climate, he has allied himself with the Turks, then this is purely for political reasons and not because of real love. Nonetheless, because he is working to break up the power of Sharif Ali, the Muslims of the Indian subcontinent are siding with him, despite the fact that his religious beliefs are against the predominant school of jurisprudence in the subcontinent, namely, the Hanafi school. He is the shining jewel of the founding family of Wahhabism. Thus, the leaders of the subcontinent are not sympathising with Sultan Ibn Saud out of love for him, but rather because of their opposition of Sharif Ali, which is yet again a manifestation of the saying:

[Not due to the love for Ali, but rather for the enmity against Mu’awiyah] [5]

May God protect the helpless pilgrims from falling victim to these personal enmities and hostilities, who, because of their simplicity, believed in the promises of Sultan Ibn Saud’s supporters and have already departed for Hajj or are about to. Only God Almighty knows what will actually transpire, but based upon the analysis of the current situation, it can be said that the possessions and lives of the pilgrims are in grave danger. However, it is my heartfelt prayer that Allah the Almighty ensure the means of protecting the poor, helpless people, who have only set out to visit the House of God which manifests His grandeur and glory, and that He safeguards them from all dangers. Ameen.

God Willing, in the next treatise, I will shed some light on the political aspect of this current conflict in Arabia.

2. Ahmad bin Muhammad al-Sharif bin Muhammad bin ‘Ali al-‘Abbas, al-Sanusi al-Khattabi al-Hasani, known as Ahmad al-Sharif al-Sa- nusi (1873-1933). A grandson of the founder of the Libyan Sanusiyya political-religious Sufi order. He became head of the order in 1902 and led the resistance against the French and the Italians, and subsequently the British. In 1916, he left Libya, which was then under Italian occupation, and went into exile, first at Istanbul and later in the Hijaz, where he resided during the conflict, becoming a confidant of Ibn Saud.

3. Massawa is a port city in Eritrea, which was a colony of Italy at the time of the conflict.

5. This saying refers to an action carried out not because of one’s love for a person but out of enmity for that person’s opponent. In English, the saying ‘the enemy of my enemy is my friend’ captures this meaning. 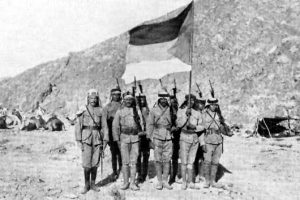 Featured • The Five Pillars of Islam 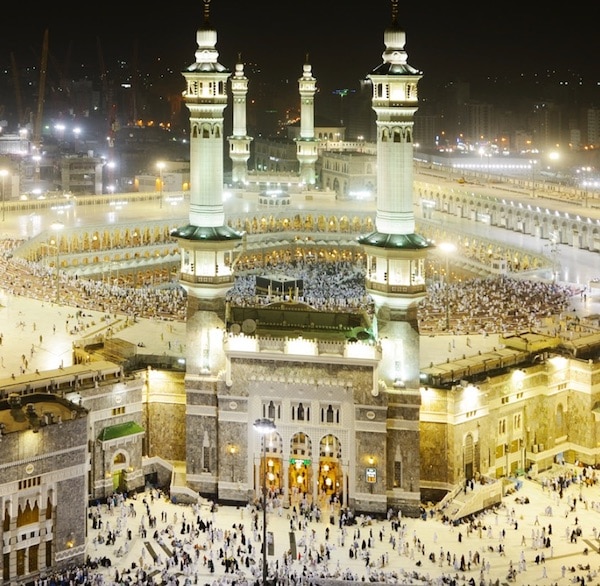 The Institution of Hajj

The 1925 Hajj Season and the Saudi Conquest of the Hijaz
The Fifth Pillar of Islam: Hajj, the Islamic Pilgrimage
Comment