On Monday, 20 April 2010, Hadhrat Mirza Masroor Ahmad, Khalifatul Masih V(aba), Fifth Successor to the Promised Messiah(as) and Head of the Worldwide Ahmadiyya Muslim community, visited the Shroud of Turin Exhibit in Turin, Italy, becoming the first Khalifa to observe the Shroud in person (Mr Fatir Malik, President Ahmadiyya Muslim community Italy had suggested that Hadhrat Khalifatul Masih V(aba) visit the Exhibition during his visit to Italy and Hadhrat Khalifatul Masih V(aba) agreed. Mr Malik spoke to Church officials who were happy to arrange for Hudhur(aba) to visit). Upon reaching the Shroud Exhibit, Hudhur (aba) was greeted by the Director of the Exhibition, Monsignor Ghiberti, and escorted through a special entrance. Although photography is not permitted, at Hudhur’s request, special permission was granted to take photographs without the use of flash. After displaying information about the Shroud on a large screen, the Director took Hudhur (aba) to the Church where the relic is exhibited on an altar behind a glass panel, which is filled with gases to preserve the cloth. Public viewing was discontinued while Hudhur(aba)’s entourage viewed the glass case from the nearest aisle; photographs were also taken. The Director then took Hudhur (aba) to the Seminary where Hadhrat Khalifatul Masih V(aba) was introduced to the resident expert on Islam, Professor Don Tino Negri. Hudhur (aba) was greeted most courteously and discussion ensued in which Mr Fatir Malik acted as interpreter. Below is the English translation of the conversation that took place between Hudhur(aba), Monsignor Ghiberti, and Professor Don Tino Negri.

Monsignor Ghiberti: what in particular motivated you to come and see the Shroud of Turin?

Hadhrat Khalifatul Masih V(aba): We were previously unaware that the Shroud of Turin was being exhibited. It was by chance that this programme came about and the community informed us that the Shroud of Turin Exhibition would be taking place during these days. We are from that section of Muslims who believe that the Shroud of Turin was actually used for the Messiah, peace be upon him, although our views differ. According to us, Jesus(as) was a great, and appointed, Prophet of God. According to Jewish teachings, as crucifixion was something inappropriate for a Prophet, when the Jews put him on the cross, God saved Jesus(as) from crucifixion. And we believe the Founder of the Ahmadiyya Muslim community is the Promised Messiah of this age. He stated that the Messiah (i.e. Jesus(as)), was treated and Allah granted him life thereafter. This is why I was interested in seeing this Shroud.

In this regard it is a very blessed cloth. However, according to our view, it does not prove his death; rather it proves he was alive.  In any case, we also consider this to be a blessed Shroud despite our differing views.

Professor Don Tino Negri: according to your belief, did Jesus(as) then travel to Kashmir?

Hadhrat Khalifatul Masih V(aba): yes, and for the first time God disclosed this matter to the Holy Founder of the Ahmadiyya Muslim community. It was after this that other research was carried out. In 1899, he wrote the book Jesus in India and revealed all this therein.

Professor Don Tino Negri: how are you related to the Founder of the Ahmadiyya Muslim community?
Hadhrat Khalifatul Masih V(aba): my relationship is that of great grandson but this relationship has nothing to do with the Khilafat. An electoral college is convened for the elections of Khilafat, as the Pope is elected, behind closed doors. Hence in 2003, at the demise of the Fourth Khalifa(rh), members of the Electoral College, who were from amongst notable persons from all over the world, elected a person behind closed doors; in fact, it was inside a Mosque.

It is Allah’s extraordinary Grace that I have come for the first time and the Shroud of Turin Exhibition is on show. I have heard that usually this exhibition takes place every 25 years, but this time it occurred after 10 years. Nevertheless, I held a great desire to see this and Allah has provided me with this opportunity, and I said that I ought to see it.

Monsignor Ghiberti: there is no fixed time for the exhibition; sometimes it takes place after a lengthy gap and at other times after a short time period.

Hadhrat Khalifatul Masih V(aba): when will the exhibition be held again – or will it be on display for the coming few years? Does it depend on the Pope’s directives or does someone else decide?

Hadhrat Khalifatul Masih V(aba): at times after 2 years and at other times after 10 years. Anyhow, I believe Allah granted me this opportunity and I also have now seen this Shroud – I do not believe any Khalifa prior to me has seen it.

Monsignor Ghiberti: what were your sentiments upon seeing the Shroud of Turin?

Hadhrat Khalifatul Masih V(aba): you see, first of all this is a two-thousand-year-old image of a Prophet, and you will not find an actual image of a Prophet anywhere. With this impression, however, if one observes carefully, the expressions and features can be seen. So, a person becomes acutely aware that he has seen the picture of Allah’s special person who was born 2000 years ago. This is an actual picture and not a man-made image.

Monsignor Ghiberti: although we do not agree with your point of view that he was a prophet, but he did bear suffering.

Hadhrat Khalifatul Masih V(aba): he bore immense suffering. And this is what we say – that he faced suffering. Allah granted him such a large reward for this that He sent him in search of the lost tribes of Israel to Kashmir. Wherever they had dispersed to, he brought them together. Christianity was preached and it spread throughout the world. Allah made the promise that I will multiply it; I will confer it respect; and from a worldly perspective, I will endow it with abundant wealth. Allah fulfilled these promises and the result of that suffering is that in the world today, Christianity has reached lofty heights in material terms.

Allah’s chosen people are inflicted with suffering; however, Allah does not finish them off as a result; rather, he blesses them. Therefore, Allah blessed Jesus(as) according to the promises he made to him. (Referring to the building in which they were in, Hadhrat Khalifatul Masih V(aba) said:) The people who have attained this rank, and all these things and the vast size of Christianity in the world; the status currently that these people have attained is a result of that suffering alone. This suffering that resulted in their attaining a great deal requires that all Christians become the followers of the true teachings of Jesus(as), because Allah has granted them this status where there is a responsibility to propagate the true teachings. So, it is my prayer that these people can spread Jesus(as)’s true teachings in the world.

(On the request of the interpreter, Hadhrat Khalifatul Masih V(aba) repeated what he had just stated:) They attained this rank as a result of this suffering, in other words, they are the flag bearers of Jesus(as)’s teachings. May Allah enable them to properly propagate the true teachings of Jesus(as) all over the world.

As I have said, this is suffering which God’s holy people have to endure. And Hadhrat Mirza Ghulam Ahmad of Qadian(as), who we believe is the Promised Messiah and Imam Mahdi, also endured suffering and after so did his Community until today. And the progress of our Community is a result of this suffering.

Professor Don Tino Negri: does your community have good relations with other religions?

Hadhrat Khalifatul Masih V(aba): we say, and God’s teaching regarding religious matters, is that there is no compulsion in faith. God has set forth the Guidance before us. Whoever desires can follow it and whoever wills can reject it, because in our view transforming people’s hearts or persuading someone to a particular way is God’s work; no one can be compelled.

The Qur’an’s teaching regarding religious matters is that that there is no compulsion in faith. And God states that He sends the Guidance. Whoever wants to can follow it, and whoever wills can reject it. The responsibility of those who bring a message from God is only to convey that message. Hence, to become angry at someone if he does not accept the message is an erroneous approach. We believe that God created man. Mankind has values as well – this is why it has been created.

Apart from religion, it is necessary to recognise and identify the values for which man was created. If, on the basis of religion, fights continue amongst people and a lack of respect is displayed, then human values may deteriorate. The world has fallen prey to restlessness; we say that all religions should join together and establish peace in the world, because the teaching that God has given to every religious follower is to spread His message – God’s message can never be one of destroying peace. From amongst thousands of Prophets such as Jesus(as), Moses(as) and Harun(as) (Aaron), the Qur’an has mentioned the names of only a few. The Qur’an also states that a Prophet appeared in every nation. God sent His holy people to every nation to establish worship, and provided the teaching that everyone should be respected, hence, we respect every prophet; and this is precisely what the Holy Qur’an teaches. On the basis of this civility we meet and converse with everyone, and we arrange such symposia in which people of every religion inform us about their faith, and in this way, an environment of unity, peace and brotherhood can be formed.

Monsignor Ghiberti: are such symposia held in England?

Hadhrat Khalifatul Masih V(aba): in England as well and also at various times wherever our community is based in 24 or 25 of the larger countries. Such symposia are held in Australia, Germany, Canada, America and in several African countries. It is our view that every person of any faith is a descendant of Adam(as), and that the progeny of Adam(as) should be greatly respected because, being removed from heaven once, one should not be removed again and dwell in hell.

(Monsignor Ghiberti and Professor Don Tino Negri thanked Hadhrat Khalifatul Masih V(aba) and escorted him to the library of the religious institute.) 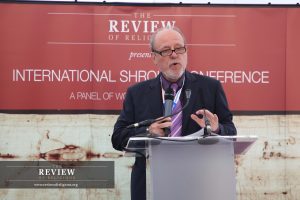 Demystifying the Mysteries of The Shroud with Bruno Barberis 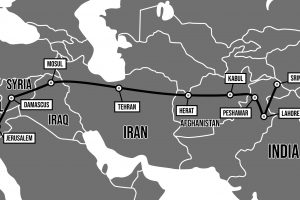