Recently, a Muslim and hijab-wearing model, Halima Aden, posted several Instagram stories explaining why she quit the fashion industry, saying that she had been compromising her hijab (head covering and modest attire for Muslim woman). Aden was the first Muslim woman who wore a hijab in the Miss Minnesota USA pageant. She is also well known for being a Vogue model. On Tuesday November 24, Halima Aden, originally from Somalia, posted about 27 stories on Instagram; in each post, she narrated how she had been compromising her hijab in order to fit in. She posted several pictures of her wearing different styles of head coverings, one of them resembling a bow tie turban. She said that this was not the correct way of observing the hijab. She explained that she should have been covering her chest as well.

In one post she wrote, ‘Looking back now I did what I said I would never do. Which is compromise who I am in order to fit in…If I continued down this path, I would’ve definitely lost my hijab completely.’

In another post, she posed whilst wearing a  plain yellow chiffon hijab draping down and covering her chest. She also wore a tan colored long sleeve chiffon dress. In this monochrome style, she wrote, ‘If my hijab can’t be this visible, I’m not showing up. Period.’

When I read her 27 Instagram stories, I applauded her courage to admit her mistake publicly. She is one of the most high profile models in USA. As a Muslim woman from Indonesia, I can resonate with her because I am also considered a minority, although Indonesia has the highest Muslim population in the world. But I can guarantee that relatively few people even recognize Indonesia. Perhaps many have never even heard about Indonesia.

I came to the USA in 2008, and at times, I too felt somewhat of an inferiority complex and did not feel confident enough in public. I especially felt this way during the early years of my life in California. Although my mother and two older sisters wear the hijab and modest attire, and they’ve never had a problem in doing so, I feel the reason why I had experienced this inferiority complex for a short while was because I was adjusting to a new life as an immigrant, knowing little English, and trying to start a new life in a new country.  It took courage, tears and self-assurance that I am the only one who can truly defend my identity and be confident. I truly believe that if I don’t feel confident, people are able sense that. Sometimes I thought that if I wore my hijab a bit loose, it would not that big of a deal, since I still pray five times a day and do good deeds; so I’m still a ‘good’ Muslim. But then I had to remind myself that if I let myself slacken like this, then I will also slacken in other aspects of my religion. In the end, my soul would be ruined because I did not follow what God has taught me – a wise teaching of modesty and dignity.

One of the things which enabled me to rise above this fear inside me, is the wisdom that I and millions of others around the world receive from the worldwide leader of the Ahmadiyya Muslim Community, His Holiness, Mirza Masroor Ahmad (aba). His Holiness explained beautifully the importance of being confident in modesty, and remaining strong with the Muslim identity when he said:

‘You will set an example of righteousness and morality that will inspire others and will prove that you are people who choose to follow your faith and that you are the standard bearers for Islam and for women’s rights in this era. You will be the ones who lead others towards genuine progress and development, rather than simply following the crowd towards meaningless material pursuits.’ [1]

That last sentence, ‘rather than simply following the crowd towards meaningless material pursuits’, was the wake up moment for me. I realized that if I sacrifice my Muslim identity so I can fit in, it would be a moment of weakness. Everyone in society, every successful leader says that we should become a unique person with our own character. We are taught in society to have a meaningful life, not a meaningless one.

By staying firm and strong in my faith whilst living in society despite looking different, Islam has taught me the true purpose of life, which is to become a useful member of society by gaining the highest education possible, so I can help other people, and so I can create a positive impact in society with whatever skills I choose to pursue. Islam teaches me to become like fresh water that quenches the thirst of dried soil. I am a Muslim woman and my hijab is who I am.

About the author: Khalida Jamilah is an aspiring journalist born and raised in Indonesia. As a Peace and Conflict Studies graduate from University of California Berkeley. She is interested in the Islamic response to contemporary issues and world cultures. She currently resides in California. 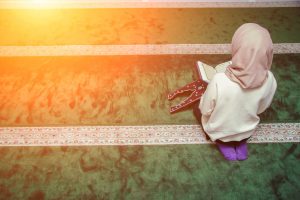 Reaching for the Stars: Interview with Convert and Teacher, Melissa Ahmedi

How Faith Lays the Blueprint for Women’s Justice
Mohamed Salah, Liverpool & Islam – ‘If He Scores Another Few, Then I’ll Be Muslim Too…’
Comment