As our understanding of the universe increases and the vastness of this great universe becomes progressively more fathomable, our quest to seek the origin of life also intensifies. It is natural to seek out how and why every inch of this spherical mass of rock, our earth, got inhabited by life from its highest mountain to its deepest sea? There is no known evidence of similar forms of life in any other planet of the solar system. How come the barren rocks, volcanoes, meteorite dust, sands, and chemicals on our relatively young planet, a mere 4.5 billion years old, harbour life? How did the life start on earth?

Before attempting to explore the question of origin of life, we need to understand what life is. The Oxford Dictionary defines life as, ‘The condition that distinguishes animals and plants from inorganic matter, including the capacity for growth, reproduction, functional activity, and continual change preceding death.’ [1] When searching for the origin of life, our biggest challenge is that we do not know what life looked like at its origin. The oldest accepted fossils found in ancient rock formations are thought to be 3.5 billion years old. These are single-celled microorganisms like modern bacteria, and scientists are still trying to understand the significance and origin of these. [2] It is argued that viruses need others for their survival and reproduce only by infecting cells of their hosts; hence viruses could not have come first. While another intriguing suggestion is that viruses may have led to the development of the cellular life. [3] [4]

What are the Essential Processes of Life?

For life to function, there are certain core/ essential processes. Now, let us take the example of the smallest living unit, the cell, and see how these living processes work at the most basic level in a living cell.

Firstly, a living cells needs to have a core structure, i.e., a wall or a boundary, and the ability to stay together with other similar cells for its structural integrity. In a living cell, cell membranes are made of lipids (fat), molecules containing long chains of carbon atoms.

Secondly, a living cell needs to undergo chemical reactions to sustain itself by harnessing energy from its surroundings, called metabolism. In the living cells, proteins help to run metabolism – proteins are chains of amino acids (chemical compounds), twisted into pretzel shapes. Proteins, such as enzymes, help to speed up chemical reactions.

Thirdly, a living cell must have the capacity to reproduce by mechanisms that involves building more cells by passing genes to its off spring. Genes are pre-set in molecules called nucleic acids, such as deoxyribonucleic acid, better known as DNA.

Theories of Origin of Life

There is no current consensus among scientists about the origin of life and how the essential processes of life came together in such harmony.  There are several theories regarding the origin of life, and to date there is no single hypothesis that is universally accepted based on evidence. However, the study of the origin of life has confirmed that even in the simplest cells, three-essential life processes are independent and inter-dependent. For example, in a living cell, the structure, metabolism and genes are extraordinarily complex, exceptionally well-co-ordinated and reliant on each other. For example, proteins require genes for their existence as genes carry instructions to make proteins; in turn, proteins are essential for maintaining and copying genes, so genes need proteins for their existence. And proteins – made by genes – are crucial for constructing the lipids for membranes, which are required for the structural integrity of the cells. Therefore, the essential processes of life are interwoven, and cells can only function in the presence of all these essential systems. This understanding would reject the idea of ‘a single system of life first, such as the ‘primordial soup”.

A. Single system of life first                    The idea of the Primordial soup was suggested independently and simultaneously by Russian scientist Alexander Oparin and English geneticist John Haldane. They suggested that life started in the oceans spontaneously in the form of protein generated by a mix of gases in the atmosphere and energy from lightning strikes. [5] [6] It means that a single component of life not only spontaneously came into being, survived, but also somehow created other vital components around it. All the scientific research to date has not produced any evidence to support this in the lab. When basic units of proteins, called amino acids, were heated in the lab, under dry conditions, they joined together (term polymerised) to form a more complex structure. Similar experiments yielded some success in creating complex structures, but these structures lack any creative capacities and metabolic activity. [7] [8] Therefore, researchers are starting to realise that assuming life started as a single point and whatever came first ‘invented’ the others, is like trying to build a car by making a chassis and hoping that wheels and an engine will spontaneously appear. [9]

B.  All systems of life first                               An alternative hypothesis is that all three essential systems of life i.e., cell membrane, metabolism and genes emerged together in a highly simplified form. [10] [11] The quest for the origin of life has granted momentum to the everything-first hypothesis. [12] This idea is supported by the identification of a component of RNA and lipid-like material that makes cell membrane in the Murchison meteorite. [13] [14] [15] Demonstrated by lab experiments that the same starting chemicals can make the precursors of amino acids and lipids, it is suggested that all the cellular subsystems could have arisen simultaneously through common chemistry. [16]

The key is what is called ‘Goldilocks chemistry’: a mixture with enough variety for complex reactions to occur, but not so much that it becomes a jumbled mess. The concept of Goldilocks chemistry proposes that the right mixture of chemical compounds, undergoes the complex chemical reactions at the correct time, at a precise speed, and ends at the exact instant to produce the desired material.

A study of the origin of life shows that even the most basic life is extraordinarily complex. The smallest known bacteria that is metabolically independent belongs to Pelagibacter ubique species; this simplest form of life has 1,400 genes! Can unguided haphazard genetic activity through random mutations even begin to explain the spontaneous origin of so many genes working harmoniously and effectively? It is estimated that if it were left to chance, it would take 10248 years to form a single protein molecule. [18] A mere 4.5 billon years is too short a time frame for an undirected origin of life. How can all the right processes, required for the origin of life, take place, at the right time, in the right order and end at the right time without the guidance of a Masterful Creator? Fifteen hundred years ago, this concept of the right place, right time and right choice was mentioned in the Holy Quran. Allah the Exalted says, ‘Who has created seven heavens in harmony. No incongruity canst thou see in the creation of the Gracious God. Then look again: Seest thou any flaw? Aye, look again, and yet again, thy sight will only return unto thee confused and fatigued.’ [19]

The degree of precision in this universe can only be rationalised by accepting that conscious wisdom governs a purposeful, step-by step progressive design.This world is far too well-tuned to support life; it is irrational and blind prejudice to insist that undirected chance and chaos can lead to coherent and well-balanced processes required to originate and sustain life .It is imprudent to unquestioningly accept that complex and well-structured life originated without a guided design, master plan and a resourceful creator.

Islamic Concept of the Origin of Life

The concept of haphazard evolution without a pre-set design is categorically rejected by the Holy Quran. The Holy Quran says, ‘And thy Lord creates whatever He pleases and chooses whomsoever He pleases. It is not for them to choose. Glorified be Allah, and far is He above all that they associate with Him.’ [20] The Holy Quran explains that creation happened only in a step-by-step progressive stage. In different stages of the development of life, different processes were required to govern and shape life. The Master Creator provided the correct content, process, and resources at every stage. These processes were optimised to create an environment to support life, with no room for a jumbled mess. In other words, the Masterful Designer crafted the Goldilocks chemistry to create life.

There is not an iota of evidence from every day scientific practice that blind, haphazard, and random biological processes lead to a highly precise, organised, cohesive, and coordinated structured outcomes. The Holy Quran teaches us that the origin of life is a well chalked-out, well preserved and well implemented process. At every step that led to the origin of life, choices had to be made. The hand of the All-Seeing and All-Knowing God guided these choices to direct the process in a measured way. Such precision is beyond the capability of the blind operator of natural selection. God is the Creator; He alone makes choices. The genius and profound knowledge, immense power, and conscious wisdom that is required to create Goldilocks chemistry from millions of biological possibilities, cannot be accomplished by chance alone. The origin of life is a game of chess and not a game of chance. On the vast chequered board of creation, each creation is moved square after square to a predetermined destination. [21]

The origin of life is neither an accident, nor an ungoverned and unguided process of evolution; it is the result of a Masterful design and creation by the Prime Mover, Who governs with majesty and absolute wisdom. The craft of the Master Designer, our universe, represents order, structure, and absolute concordance; or in other words, demonstrates Goldilocks chemistry. Indeed, this flawless design of Goldilocks chemistry is a living proof of the existence of a Grand Designer. The Conscious Wisdom and Masterful Design by an All-Knowing God is the only rational explanation of the origin of life.‘What is the matter with you that you expect not wisdom and staidness from Allah? And He has created you in different forms and different conditions.’ [22]

About the Author: Dr Amtul Razzaq Carmichael MD, M Ed, FRCS (Gen Surg.), MBBS, is a consultant. She qualified in 1987 with gold medals for academic Excellence and undertook her surgical training at major teaching hospitals in London, Edinburgh and Philadelphia. She has authored many articles for major peer-reviewed scientific journals. She is a senior member of The Review of Religions Editorial Board as well as Assistant Manager

[18] Allen F 1958 The Origin of the World—By Chance or Design? in the Evidence of God in an Expanding Universe. By Monsa JC. Thomas Samuel Publishers. Bombay, p20 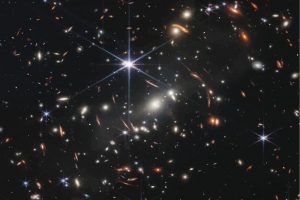 Rays of Wisdom for the Modern World Part 23