The French Council of Muslim Faith (CFCM), responsible for representing Islam to the French state, presented its Charter of Principles of Islam in accordance with the wishes of President Emmanuel Macron. However, these principles, let us remember, have been engraved in the Holy Qur’an for more than 1400 years.

Since his speech of October 2, 2020, on Islamist separatism, and even more since the two recent attacks, President Emmanuel Macron and his government have put more pressure on the CFCM in order to establish a ‘Charter of Principles for Islam of France.’ In this speech, President Macron wanted Islam in France to conform with Republican principles. He had clearly displayed the objectives which were, among other things, to free Islam in France from foreign influences, to put an end to the system of detached imams, to train and promote in France a generation of imams and intellectuals who defend an Islam fully compatible with the values of the Republic, and to promote equality between men and women.

What Does This Charter Say?

This ‘Charter of Principles for Islam in France’ was signed on January 17, 2021, and is based on ten articles. Based on verses from the Holy Qur’an, these ten articles emphasize various principles such as freedom of conscience, non-criminalization of renouncing Islam, the negation of the concept of apostasy, equality of men and women, fraternity, the fight against all forms of racism, anti-Semitism, homophobia, the fight against the ideology of takfir (excommunication), the attachment to reason and free will, the attachment to secularism and public services, and the fight against anti-Muslim hatred, propaganda and false information.

This charter clearly displays the objective of combating the dissemination of political discourse in places of worship. It also underlines the ‘rejection of any form of interference and the instrumentalization of Islam for political ends’.

This charter has the merit of reminding us of the importance of respecting these key principles: they are not foreign to Islam. As the verses quoted in the charter show, Islam advocated them over fourteen centuries ago!

The Qur’an: Fourteen Centuries Ahead

It would be naive to believe that political Islam and extremist excesses do not exist within the Muslim community. But it is wrong to believe that a majority of Muslims share such ideas and beliefs. The overwhelming majority of Muslims try to implement the true precepts of Islam and their practices are fully consistent with Republican principles. But unfortunately, the abuses of some extremists, who must be condemned without any reservation, make much more noise, and we speak very little of French people of Muslim faith who lead a peaceful life and whose religious practice does not derogate from any principle of the Republic. The African proverb could not be more apt: a falling tree makes more noise than a growing forest.

The Holy Prophet Muhammad (sa) received the Holy Qur’an as a revelation fourteen centuries ago; its teachings on inter-community peace and tolerance were innovative for the time. If some Muslims violate these principles, they are the only ones to blame. Islam is by no means a religion in crisis as President Macron asserted. It is a universal and timeless religion. Its unrivalled precepts have inspired the civil codes and constitutions of many countries claiming to be developed. Below are some key values advocated by the Holy Qur’an.

The Holy Qur’an defends freedom of worship and free will, as the following verses show:

‘There should be no compulsion in religion.’ [1]

‘And if thy Lord had enforced His will, surely, all who are on the earth would have believed together. Wilt thou, then, force men to become believers?’ [2]

These verses clearly demonstrate that the Holy Qur’an stands for freedom of conscience and religion.

Critics of Islam often retort that apostasy (renouncing Islam) is punished by the Holy Qur’an and that people were murdered for this reason. Let it be clear: apostasy is not condemned by Islam. The following Qur’anic verse clearly demonstrates this:

The Holy Qur’an very clearly advocates the equality of men and women:

‘So their Lord answered their prayers, saying, ‘I will allow not the work of any worker from among you, whether male or female, to be lost.’ [5]

‘But whoso does good works, whether male or female, and is a believer, such shall enter Heaven, and shall not be wronged even as much as the little hollow in the back of a date-stone.’ [6]

We see once again the perfect equality between male and female taught by the Holy Qur’an.

The Holy Qur’an clearly states that all people are born equal:

‘O mankind, We have created you from a male and a female; and We have made you into tribes and sub-tribes that you may recognize one another. Verily, the most honourable among you, in the sight of Allah, is he who is the most righteous among you. Surely, Allah is All-knowing, All-Aware.’ [7]

Again, by the 7th century, Islamic teachings had laid the foundations for the principle of perfect brotherhood!

The Holy Qur’an states: ‘whosoever killed a person… it shall be as if he had killed all mankind’. [8]

The Promised Messiah and Imam Mahdi, and founder of the Ahmadiyya Muslim Community, Hazrat Mirza Ghulam Ahmad (as) explains, ‘Anyone who abandons kindness abandons religion. The Holy Qur’an teaches that if someone kills a person for no legitimate reason, it will be as if they killed the whole world. Likewise, I say that if someone is not kind to his brother, it is as if he has been mean to the whole world.‘

Human life is sacred in Islam: how can terrorists justify their barbaric acts in the name of this beautiful religion?

Loyalty to the Homeland

According to the teachings of Islam, the definition of loyalty is unequivocal respect for one’s commitments and alliances at all levels and in all circumstances, however difficult it may be.

The Holy Prophet Muhammad (sa) teaches that ‘the love of his nation is part of his faith’. Sincere patriotism is therefore required in Islam. In order to truly love God and Islam, a Muslim must love his nation.

In this regard, the Holy Qur’an enjoins Muslims to respect, in all circumstances, the principle of equity:

‘O ye who believe! be steadfast in the cause of Allah, bearing witness in equity; and let not a people’s enmity incite you to act otherwise than with justice. Be always just, that is nearer to righteousness. And fear Allah. Surely, Allah is aware of what you do.’ [9]

Funding of Places of Worship

The French state wants places of worship in France not to be funded by foreign countries. This is a good initiative because those who fund can also control the speeches that are held in these places and can have a real influence on the faithful. The Ahmadiyya Muslim Community, which is present in more than 200 countries, is exemplary in this regard. The funds that make it possible to build the places of worship and to ensure their operation come entirely from the members of our community. It does not receive any funding from foreign countries. We are thus independent. In addition, our places of worship and our sermons are open to everyone. Anyone can come and listen to what is said there, only the true Islamic teachings are heard: the oneness of God, love, and tolerance.

This ‘Charter of Principles for Islam in France’ has the merit of recalling that the principles that ‘Islam in France’ is invited to respect were engraved in the Holy Qur’an fourteen centuries ago! Islam was a pioneer, and taught them as early as the 7th century: they have also inspired the civil codes and constitution of Western countries.

Moreover, no state should fear the true Islamic teachings. In one of his speeches, the Fifth Caliph and Worldwide Head of the Ahmadiyya Muslim community, Hazrat Mirza Masroor Ahmad (aba) said:

‘The Holy Prophet Muhammad (peace be upon him) himself taught that the ‘the love of one’s nation is a part of your faith’. Thus, sincere patriotism is a requirement in Islam. To truly love God and Islam requires a person to love his nation. It is quite clear, therefore, that there can be no conflict of interest between a person’s love for God, and love for his country. As love of one’s country has been made part of Islam, it is quite clear that a Muslim must strive to reach the highest standards of loyalty to his chosen country, because this is a means of reaching God and becoming close to Him. Hence, it is impossible that the love a true Muslims hold for God could ever prove to be an impediment or barrier preventing him from displaying true love and faithfulness towards his country.’ [10]

About the Author: Talha Rashid is Editor-in-Chief of La Revue des Religions. He is also National Secretary for External Affairs for the Ahmadiyya Community in France. He holds a Doctorate in Molecular and Cellular Biology from Paris Descartes University.

TagsFrance Islam in Europe Islam in the West State - France 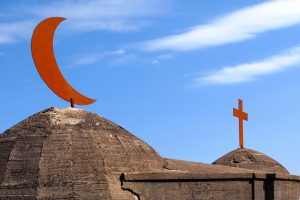 A Quest for the Origin of Life: From the Primordial Soup to Goldilocks Chemistry – Sign of a Grand Designer?
Archbishop of Athens Alleges Islam is Not a Religion but a Political Party
Comment