If you ask any practising Muslim woman in Britain what subject most strangers broach with her, I am convinced that she will respond ‘my hijab‘ or ‘my purdah (veil).’ [1]

The questions which such women, including myself, are invariably asked by perplexed voices are:

‘Why do you cover your head?’

‘Has your family forced you to wear that?’

Personally, I feel the constant rebuttals and reassurances to acquaintances can become tedious, attempting to convince others that what we wear is something we happily choose. If we have no issue with our own dress choices, then why should others? The veil, or hijab, is not a problem for most Muslim women, even if others insist it is.

The whole controversy of the how’s and why’s of this Islamic teaching revolves around just a handful of verses of the 6,000+ verses of the Holy Qur’an. The practice of the veil is just one of over 700 commandments [2] in the Holy Qur’an that Muslim women endeavour to follow. So, for a lot of us, the veil is only one aspect of many of a coherent faith that structures our daily lives from the mandatory daily worship to the acts of charity and the observing of fasts. In Chapter 24 of the Holy Qur’an, Muslim women are told to restrain their looks as indeed are men, when in contact with the opposite sex who are not immediate family. Women are also guided not to exhibit their beauty publicly and ‘that they draw their head coverings over their bosoms…’. [3] Then in Chapter 33 Verse 60, believing women are directed to pull down their ‘outer garments’ from their heads over their faces. It is worth pointing out that the Holy Qur’an does not specify the exact style of clothing a Muslim lady should don and indeed this varies amongst the global Muslim population of 1.8 billion. Avid globetrotters will have witnessed the black, flowing abayas of Arab women, the kerudung of Malaysia, the buibui of East Africa and the niqab of Pakistan. The choice of style is personal and can fluctuate as do the ages, lifestyles and environments that Muslim women experience. My sister and I both observe the veil, but our journeys to this path were different. I began following this Islamic injunction a little later in life, perhaps as a consequence of never having lived in a Muslim-majority country like her.

Islam is often falsely perceived as a religion synonymous with extremism and rigidity, although its principles encourage adopting the middle ground. For example, although divorce is discouraged in Islam it is still permitted [4] and whilst the flesh of swine is prohibited, it is still allowed if one is ‘driven by necessity‘. [5] Additionally, the Holy Prophet (sa) of Islam taught:

‘Make religion easy for others to follow, do not make it difficult. Similarly, present religion in a pleasing manner…’ (Muslim) [6]

The Holy Prophet (sa) also expressed two observations which I think capture the essence of Islam; ‘Moderation is half of happiness’ and ‘Anything which brings you peace of mind and contentment of heart is good; anything which disturbs the mind and troubles the heart is sinful.’ [7]

Such teachings illustrate that there is a degree of flexibility, intuition and personal judgement in Islam. This means that when it comes to the injunction of observing the veil and dressing modestly, every Muslim woman has the choice of the style and manner of dress which she chooses to adopt whilst adhering to this commandment. If more non-Muslims understood this concept it might change  British attitudes towards the veil and the perception of it as problematic and incongruous in modern society. Sadly, in a YouGov poll of 2015, 57% of the British public supported a ban on the wearing of the burqa in the UK. [8] That’s an incredibly disappointing statistic for a British Muslim like myself; a woman who values both her faith and her country.

It is such attitudes that have led to publicised cases of Muslim schoolgirls being sent home over the past few years, for hijabs or skirt-lengths that flout school rules as opposed to smoking or insurrection. It is interesting that it is not only Muslims that feel there may be a greater bias against Muslim pupils in the British Education System. Jessica Shepherd of The Guardian in 2007, was to note that the guidelines in schools regarding uniforms were according to educationalists ‘at best ambiguous and at worst actually increase tensions between religious groups in the classroom.’ She elaborated that whilst schools were guided to ‘act reasonably in accommodating religious requirements’, ‘…the needs of safety, security and effective teaching and learning must always be paramount – and these may supersede individual requests under the terms of the Human Rights Act.’ [9]

Shepherd cited Dr Dianne Gereluk, recently an Associate Dean at the University of Calgary and author of Symbolic Clothing in Schools (Bloomsbury 2008). Gereluk felt that the Government sent ‘mixed messages’ on whether schools should allow children to wear religious symbols and dress. On the one hand, schools were guided to encourage diversity whilst on the other they were told to foster ‘Britishness’. She concluded:

‘England is unfairly prejudiced against pupils wearing Muslim or secular symbols, such as Make Poverty History bands, and more lenient towards those who wear Christian and Jewish Symbols.’ [10]

In the same article, Professor Mark Halstead, Head of the Dept for Community and International Education at the University of Huddersfield stated:

‘It is often implied that girls and women are forced to wear the veil or other clothing that envelopes the body by their fathers, male relatives or by the old men at the mosque. My own research suggests that largely this is not the case. Muslim girls normally make an autonomous decision to wear the hijab.’

Many Muslims would concur with Halstead’s observations. The Founder of the Ahmadiyya Muslim Community in 19th century India, Hazrat Mirza Ghulam Ahmad (as), was to explain:

‘In the current day objections are raised against the veil. However, people do not realise that the Islamic veil is no prison. It is only a barrier which prevents free mixing of men and women.’ [11]

Furthermore, the current Worldwide Head of the Ahmadiyya Muslim Community, His Holiness, Hazrat Mirza Masroor Ahmad (aba), an ongoing ambassador for peace, powerfully forewarned in 2010 at the Community’s Peace Symposium, that the escalating support for banning the veil across Europe could create problems of far greater magnitude:

‘Over the past few years the hijab or veil, has been made an issue in Europe…Following on from France, politicians in other European countries, and for their own political motives are issuing statements supporting a ban and this is becoming a means of injuring the sentiments of Muslims.

Whenever I have reflected on this matter, I have never been able to understand what the problem with the veil is that it has become such a threat to governments. Is it such a heinous crime to wear a coat and cover one’s head and chin with a piece of cloth that an entire Parliament should sit to pass a law against it?…

Should legislation be passed against Christian and Jewish ladies who also adopt religious attire? If bans are imposed against the Muslims, then Muslim countries may impose restrictions on some forms of Western dress in response. This issue has the potential to snowball and it will affect the peace of the world.’ [12]

His Holiness (aba) continued in the same address that it is perfectly reasonable to expect Muslim women to remove any coverings if governing authorities require to verify their identities. So, the veil is not a problem for the majority of Muslims. However, it could become a problem for humanity if this personal right (and indeed Human Right-1998) is not upheld.

[1] Muslim head covering/The Islamic practice whereby Muslim women wear loose outer clothing to cover their heads/bodies in the company of non-related men and also limit their social interaction with such men according to Quranic guidelines. 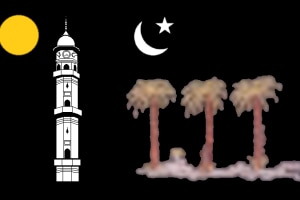 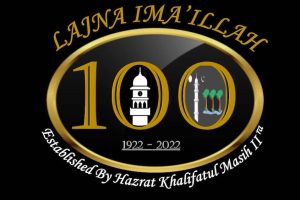 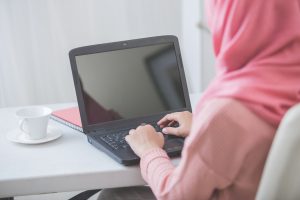 Reaching for the Stars: Interview with Journalist and Author, Khola Maryam Hübsch

The Birth of a Son and the Strengthening of Faith
What Does Islam Say About Female Imams, Western Feminism and Gender Equality?
Comment