A recent article in The Guardian’s online edition shocked me to the core because it violated the values I share with humanity at large as well as those of my Islamic faith. A 12-year-old Christian girl, abducted from her home in Faisalabad, Pakistan, was forced to marry her abductor and then spent her days chained in a cattle pen. She was condemned to a life of unimaginable cruelty, cleaning animal waste besides the obvious sexual exploitation by her 29-year-old ‘husband’. It seems the stuff of dark tales and horror movies, but it is a brutal reality in Pakistan where such cases of abuse, enforced conversions and marriages are rising. According to a 2019 report by the Human Rights Commission of Pakistan, an estimated 1,000 Christian and Hindu women are abducted and forcibly married each year. [1] In this particular case, the girl was a Christian. Christians make up a mere 2.5 million in a country with a 223 million Muslim majority. Due to loopholes in the judiciary system, criminals are managing to escape any form of retribution. John Pontifex, of the Catholic organisation, Aid to the Church in Need, has described the true gravity of the situation:

‘We receive reports every week of incidents in which girls of minority faith backgrounds are abducted, gang-raped, forcibly converted and who are made to marry their abductor. And it seems the state is complicit by failing to investigate cases, failing to bring the perpetrators to justice and sanctioning child marriages.’ [2]

Thankfully, the Prime Minister Imran Khan, has ordered an inquiry into the forced conversion of religious minority girls. Only time will tell whether the inquiry proves effective. Meanwhile, such cases provoke abhorrence on multiple levels for many practising Muslims. Firstly, there is no concept of forced conversions in Islam. At the beginning of the Holy Quran, Allah declares that ‘There is no compulsion in religion.’ [3]

Secondly, upholding justice and condemning oppression in every sphere of life are fundamental tenets of Islam. The Holy Prophet (sa) of Islam taught, ‘Let no one oppress another’ and that all Muslims have a moral obligation to fight oppression as he warned: ‘If people witness an act of oppression and do not stop the oppressor and make him desist, Allah may include them all in His retribution.’ [4]

Thirdly and contrary to popular belief, forced marriages are also forbidden in Islam. ‘Arranged marriages’ which are commonly practised by Muslims are often wrongly assumed to be synonymous with forced marriages. ‘Arranged marriages’ involve evaluating prospective life-partners by enquiring about them from those in their local communities alongside one’s own personal assessment, parental input and prayers. Hazrat Mirza Bashir Ahmad (ra) in his book, ‘The Life and Character of the Seal of the Prophets’ has explained the true concept of arranged marriages in Islam:

‘…Islam orders that when an unmarried girl is to be wed, her father, or if her father is not alive, then another close relative, should remain with her as a guardian, and a bond should not be settled without his advice. However, if a dispute arises between the girl and her guardian, the opinion of the girl shall be given precedence. However, in such a case, it shall be necessary to bring such a dispute into the notice of a judge, so that if a girl is being lured into a trap, she can be saved.’ [5]

The first wife of the Holy Prophet (sa) of Islam, Khadijah (ra), certainly did not have her marriage thrust upon her. Indeed, it was quite the opposite. Khadijah (ra) was a successful businesswoman 15 years senior to Muhammad (sa), and she herself initiated the proposal after being impressed by Muhammad’s (sa) integrity and success on a business trip that she sponsored. Furthermore, the Holy Prophet (sa) was to marry women of other faiths who themselves opted to convert to Islam prior to marriage. One example is that of Mariah Al Qibtiyyah (ra), who was born a Coptic Christian. She was sent to Arabia alongside her sister by the Maqawqis (King) of Egypt as a gesture of goodwill between the two nations. This meant that she was to be married amongst a respectable Arabian family in accordance with her social standing to strengthen the ties between the two peoples. Mariah (ra) and her sister both converted to Islam whilst on their voyage to Arabia after learning of Islam from Hatib bin Abi Balta’ah (ra). [6] The Holy Prophet (sa) was to himself propose to her and the marriage proved a happy one.

An incident from the Holy Prophet’s (sa) life with Safiyyah (ra) also beautifully illustrates how he strove to abolish any feelings of racial and religious prejudice within his own family. It is related that Safiyyah (ra) once came to the Holy Prophet (sa) in a tearful state and complained to him that his other wives who were of Arab origin, considered themselves superior to her. The Holy Prophet (sa) responded reassuringly, advising that Safiyyah (ra) could remind the other wives that not only was Muhammad (sa) her husband, but also prophet Moses (as) was her great granduncle and prophet Aaron (as) her great grandfather (i.e. her ancestors). This insightful advice from the Prophet of Allah (sa) cheered Safiyyah (ra) and she never again felt inferior to any of the other wives. [8]

This tender and sensitive response of the Holy Prophet (sa) to his troubled wife captures what an ideal Islamic marriage should be; a union where both spouses support each other. In the Holy Quran, Allah Almighty has stated the purpose of marriage as not a means for oppression or exploitation but so that spouses ‘…may find peace of mind …and…love and tenderness’ with each other. [9]

More recently in 2005, Hazrat Mirza Masroor Ahmad (aba), the Fifth Caliph and Worldwide Head of the Ahmadiyya Muslim Community, described the profundity of the marriage bond in Islam:

‘It is a pact in which you hold God as your Witness and affirm that you will try and fulfil each other’s rights while staying firm on righteousness.’ [10]

Sadly, nothing about the insidious abductions, conversions and forced marriages that are currently blighting Pakistan represent Islam. The perpetrators of such vile acts do not represent true Muslims but are simply criminals and their actions are repulsive.  Likewise, those in authority who are allowing such heinous crimes to slip under the radar are neglecting their moral duties and need to reflect what humanity if not Islamic values, actually means to them.

About the Author: Munavara Ghauri BA (Hons) Eng Lit, is married with 3 children and works as a School Librarian. She is currently serving as the Branch Leader for the Bournemouth Women’s Auxiliary Organization of the Ahmadiyya Muslim Community and is an Editor for the Women’s Section of The Review of Religions 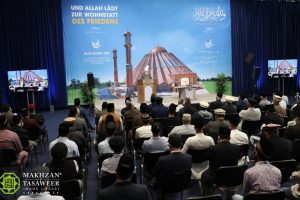 Vaccine Nationalism and the Need for Absolute Justice
Cancel Culture – Where Do We Draw the Line?
Comment