In his popular fable The Monk Who Sold His Ferrari, Robin Sharma takes his readers on a spiritual odyssey through the eyes of protagonist Julian Mantle, a lawyer turned yogi.

Julian Mantle had it all; power, prestige, prosperity, and of course, the red Ferrari parked in the center of his driveway. The genius litigator had quickly climbed the ranks in the hypercompetitive legal world; yet things were not as idyllic as they appeared on the surface. Julian’s frenetic lifestyle began to take a toll on his physical, emotional, and spiritual well-being. Cynical, unhappy, and with no sense of purpose, the once enthusiastic, master litigator suffered a life-altering heart attack in the middle of the courtroom.

After his recovery, Julian unexpectedly sold all his material wealth and headed off to India in hopes of achieving a happy and fulfilling life.

Three years later, a youthful, vibrant, and content Julian sat across from his best friend John who could hardly recognize the person in front of him. John described him as radiating peacefulness. But what caused this complete transformation?

Julian credited the ancient wisdom he learned from the yogis, monks, and sages he encountered during his self-imposed exile to India. In particular, he met a mystical band of sages who resided high in the Himalayas. These people had discovered a system to profoundly improve the quality of anyone’s life and imparted their knowledge to Julian.

Flipping through the pages of this inspirational fable, it was evident how excessive materialistic pursuit rendered Julian passionless and overwhelmed by emptiness. I wondered what advice Islamic philosophy would pass on to Julian and other materialists. If wealth cannot fill the void within, then what can? With these questions in mind, I sought to procure the Islamic remedy for this ailment that plagues countless people in the world.

The Root of All Evil?

Despite all the material gain Julian had amassed over the years, his hunger for wealth and obsession with work ultimately broke his spirit. He could no longer sleep for more than a couple of hours and was consumed by the hunger for more; more prestige, more glory and, more money. Was wealth the downfall of Julian Mantle? The Promised Messiah and founder of the Ahmadiyya Muslim Community, Hazrat Mirza Ghulam Ahmad (as) can help us answer this question.

Some people tend to downplay wealth and label it as the root of all evil. However, the Promised Messiah (as) took a holistic approach and offered a universal truth in this matter by stating, ‘Often, the rich can do things that the poor and indigent cannot. In the time of the Messenger of Allah, peace and blessings of Allah be upon him, the first Caliph, who was a very skilled merchant, offered invaluable support when he became a Muslim, and he received the rank of the Truthful (Siddiq); he was the closest companion of the Holy Prophet (sa) and became his first Caliph.’[1]

Here, the Promised Messiah (as) puts forth the universal truth regarding the benefits of wealth. Hazrat Abu Bakr (ra) is a prime example of someone who accumulated abundant wealth and devoted that wealth to the cause of Islam. When the time came, he was ready to part with all his material assets in a heartbeat for a meaningful purpose. He used wealth to his advantage and forever etched himself as the archetype of sacrifice and one who gave precedence to his faith over worldly affairs. Society today suggests that people with a lot of money are wealthy. However, Hazrat Abu Bakr (ra) demonstrated the true definition of wealth by never allowing himself to become a servant of his wealth, rather his wealth only served him and his purpose.

It is apparent that Islam does not forbid the accumulation of wealth and to strive for the good of this world. However, even in this regard, the Promised Messiah (as) draws a distinct line. He states, ‘You must not turn this world into your ultimate objective. In fact, make religion your ultimate objective, and let worldly endeavors serve as a vehicle to this end.’[2]

A major flaw in Julian’s approach to life was making wealth the be-all and end-all of life. A purpose that rendered his soul lifeless and empty.

The State of Materialists

On the surface, it may seem that those people who have made wealth their deity live in pleasure and great enjoyment. Once again, the Promised Messiah (as) profoundly dispels this false notion and states, ‘I tell you truthfully that these people appear happy only in the eyes of the world, in actuality, these people are burning from within and are drowned in grief.’[3]

This passage beautifully sums up the inner turmoil and crisis Julian was experiencing. Outsiders only saw a man driving the most luxurious cars, dining in the finest restaurants, and working in an oak-paneled office in a glittering downtown skyscraper. All these superficial things appear to be the yardstick for happiness, but onlookers are ignorant of the fire ablaze within the materialist. As the Promised Messiah (as) insightfully puts it, ‘You look at the faces of these people, but I see their hearts. They are engulfed in a blazing fire and entangled in chains and iron collars.’[4]

The State of Contentment

It is manifestly evident that the diverse forms of worldly pleasures can never sail one to the shores of contentment. Like a paper boat, it is bound to drown its passengers. However, there exists a class of people who, despite all the riches and prestige that come their way, do not bound their happiness to it. Rather, their comfort and happiness lies in God Almighty alone.[6]

Julian too was in search of lifelong contentment. The sages purposed that Dharma, which is the Sanskrit word for life’s purpose, would fulfill that longing. Thus, upon deep reflection, Julian had made the selfless service to others his Dharma.

This noble objective is beautifully illustrated by the Promised Messiah (as) in the following couplet,

My purpose, yearning, and heartfelt desire is to serve humanity;

Everyone’s ultimate desire in life is to find peace and happiness.[8]The lead character in this fable was no different. But what mountain does one climb or which valley must one traverse to find the secret for true, everlasting peace? For this purpose, Allah the Exalted has made only one path available – the path known as righteousness which is synonymous with the straight path (sirat-e-mustaqim). True happiness depends on righteousness alone and this path is reserved for a God-fearing person.[9]You will come across many yogis, sages, and monks who claim to show you the path. They will advise you to perform different incantations and strenuous exercises. But never forget, the path adopted by the Holy Prophet (sa) is the most effective and nearest way to God. Adopting a method that was not practiced by the Holy Prophet (sa) is futile. Who could be more experienced than him in the field of seeking God? Follow in the footsteps of the Holy Prophet (sa) and try to not deviate from his path even an inch.

‘Strive to forsake materialism, and to adopt piety, sincerity, and purity;

About the Author: Qasim Choudhary is a recent graduate from the Ahmadiyya Institute of Languages and Theology in Canada, and serves as an Imam of the Ahmadiyya Muslim Community in the United States of America. 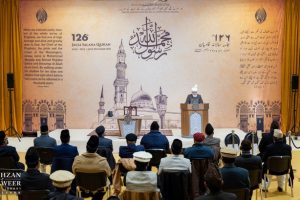 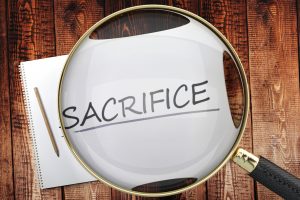 Sacrifice in the 21st-Century – an Alien Concept?

Islam and the Happiness Revolution
The True Religion
Comment