Hazrat Mirza Bashir-ud-Din Mahmood Ahmad (ra) (also known as Hazrat Musleh-e-Maud), the second successor of the Promised Messiah (as), and Worldwide Head of the Ahmadiyya Muslim Community from 1914-1965. © Makhzan-e-Tasaweer

Translated by The Review of Religions Translation Team

One can only gain true certainty when it comes to the existence of God by establishing a personal connection with Him, which eventually leads to divine converse. The more one traverses the paths towards God the more He discloses Himself to His servant and grants knowledge of the unseen. One such example is a truly remarkable prophecy made by, Hazrat Mirza Bashiruddin Mahmud Ahmad whilst living in a village of India. As the Promised Son who was foretold by God to the Promised Messiah (as), Hazrat Mirza Bashiruddin Mahmud Ahmad (ra) established an exemplary bond with God Almighty, and would go on to be elected as the divinely appointed Caliph of the Community. Furthermore, in accordance with the prophecy, Islam would make great progress and great feats would be achieved during his era.

On 7th January 1938, the loudspeaker was installed in Masjid Aqsa, Qadian for the first time. On the same day, during the Friday Sermon, Hazrat Mirza Bashiruddin Mahmud Ahmad (ra) said the following remarkable words:

‘That day is nigh, when an individual will be able to lecture and teach from one place, captivating the entire world in the process. For now, our situation does not permit us to do so, as we do not currently have enough resources; there is an obstacle in the form of a lack of scientific advancement. However, should all these barriers be removed, and given the success Allah the Almighty is granting us at such a rapid pace, it should be understood that in the near future all these obstacles will be removed. Once this happens, it is well possible that a sermon of the Qur’an and Hadith be delivered in Qadian, and the people of Java [Island of Indonesia], America, England, France, Germany, Australia, Hungary, Arabia, Egypt, Iran and similarly all other countries would be listening to that very sermon from their respective places, through a wireless radio. What a spectacular scene this would be indeed! It would be the dawn of a magnificent revolution, the mere thought of which fills our hearts with delight and rapture.’ 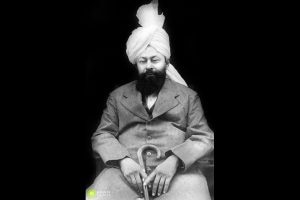 ‘He Will be Filled with Secular and Spiritual Knowledge’ – How the Promised Son was Taught Through the Grace of God
Ahmadis: Those Who Serve the Jama’at with Grateful Hearts
Comment