Formal prayer is an important part of any religion and it comes in different forms, and is offered in different ways. In Islam, Prayer also plays a central and fundamental role, as it provides the opportunity for man to develop a personal relationship with his Creator.  This relationship is set in the context of humility, whereby man, in awe of the perfect and boundless attributes of God, places himself at the threshold of the Divine, beseeching His forgiveness, help and blessings.

The format of Islamic prayer is reflective of this spirit. Its various postures and prescribed prayers focus the mind and soul on God.

Before a Muslim can begin to worship Allah, he must prepare himself physically and mentally. Physically he must make himself clean for Prayer. For this reason it is mandatory for a Muslim to perform ablution before the commencement of prayer, so long as water is available.1 The Holy Qur’an is quite explicit about this requirement, and states:

O ye who believe, when you stand up for Prayer, wash your faces, and your hands up to the elbows, and pass your wet hands over the heads and wash your feet to the ankles. (Ch.5:V.7)

The Holy Prophet(saw) taught his companions how to perform ablution. He has also explained to us the significance of wudhu, or ablution. In Tirmidhi, a Hadith (sayings and traditions of the Holy Prophet(saw)) states that the Holy Prophet(saw) said that when a believer washes different parts of his body whilst performing ablution, his sins pertaining to those parts are drained or washed away with the last droplet of water which falls down from those parts. That is to say, while performing ablution, the believer should firmly resolve to not commit any sin with those parts of the body, and to keep them as spiritually clean as they are physically clean. In this way, the Holy Prophet of Islam(saw) himself has explained the philosophy behind Islamic ablution.

Preparing the mind and soul for Prayer starts from the moment the call to Prayer is heard and is then followed by the prescribed Prayers themselves that bring one’s attention to God.

Before the congregational five daily Prayers are offered, a believer stands up and calls people to the Prayer. While ringing bells and blowing the trumpet have been used in different faiths to inform people of the time to go to worship, in Islam the call to Prayer is done by human voice alone. The words of the Islamic call serve a dual purpose of informing worshippers about the time for Prayer as well as inspiring them to come for Prayer and prosperity, and to prioritise it over other matters. The words of the Islamic call to Prayer, therefore, act as a great incentive for worshippers to converge upon the mosque. The words of the call to Prayer are:

I bear witness that there is none worthy of worship except Allah.

I bear witness that there is none worthy of worship except Allah.

I bear witness that Muhammad is the Messenger of Allah.

I bear witness that Muhammad is the Messenger of Allah.

There is none worthy of worship except Allah.

Islam prescribes five obligatory Prayers each day. One of the beauties of Islam is that the entire Shariah (Law) has been both described in the Holy Qur’an itself, and was actually demonstrated by the Holy Prophet(saw). The five daily Prayers have been prescribed as a blessing for Muslims in the Holy Qur’an:

And if We had not strengthened thee with the Qur’an, thou mightest have inclined to them a little. (Ch.17:V.75)

The frequency of Prayer is designed to continuously nourish the soul in the same way that food continuously nourishes the body. Furthermore, this provides a constant reminder of God and the blessings of His support in all activities of our daily lives. The Founder of the Ahmadiyya Muslim Community(as) has elaborated on the philosophy of the five timings of Prayer:

“These are a picture of your different states. Five mutations are inevitable in your life when a misfortune befalls you. And these must occur naturally: (Kashti Nuh, p.64, Ruhani Khaza’in, Vol.19, p.69)

(i) This first state is when you are informed that a misfortune is about to befall you, say, for example, if you are served with a warrant from a court of law. This is the first state, and in it your comfort and happiness is disturbed. This state is like the time of the declining of the sun, because your happiness has started to decline as well. Against this, the Dhuhr (afternoon) Prayer, whose time starts with the lowering or declining of the sun, has been prescribed.

(ii) The second change happens to you when you are brought very close to ruin, say, once you have been apprehended, as per the warrant, and brought before the judge. This is a time when fear petrifies you, you are extremely scared, and any semblance of comfort has deserted you. So this phase resembles the time when the brightness of the sun has dimmed and you are able to set your eye on it and it becomes evident that its setting is imminent. Against this state, the ‘Asr (late afternoon) Prayer has been prescribed.

(iii) The third change happens when you lose all hope that you will be able to escape disaster, say, when the charge-sheet has been written against you, and witnesses have given evidence to support your capital punishment. This is the time when your senses start to leave you and you begin to realise that you are a captive. This condition resembles sunset. By this point there is no hope for any sunlight. Against this spiritual condition Maghrib (sunset) prayer has been prescribed.

(iv) The fourth change occurs when the calamity has actually happened and its utter darkness has encompassed you, say, when, after the charges and the trial, the verdict is announced to you, and you are handed over to a policeman for custody. So, this condition resembles nightfall; it becomes pitch dark. Against this spiritual condition ‘Isha (night) Prayer has been prescribed.

(v) Then, after you have spent some time in this trouble, God’s mercy is moved and He delivers you from that trouble, just as morning breaks out of darkness and then light makes itself manifest with all its brightness and sparkle. So, against this spiritual condition Fajr (morning) Prayer has been prescribed.

So God, seeing five stages in your character, has prescribed for you five Prayers…” (Kishti-e-Nuh (pp. 63-65)

Muslims all over the globe pray in one direction, towards the Qiblah, the Holy Ka‘bah in Makkah. Islam is unique because in other religions the adherents in different parts of the world face each other, or in various directions for worship.

Turning to the Ka‘bah while praying is a means of establishing complete unity amongst the believers, and provides them with a focal point of congregation – although the focus remains firmly on God.

Different societies have different ways of showing respect and reverence. For example, historically the Turks stood up with hands folded on the chest, and the Iranians simply stood with hands hanging down; bowing down is a sign of reverence amongst Hindus as well as some other cultures; in India and Africa to prostrate is a sign of great respect, while in Europe people kneel as a sign of submission.

Islamic worship includes these as well as other postures in its Prayer, thereby demonstrating a culmination and refinement of the various forms of worship found in preceding faiths.

The formal act of Prayer begins when the worshipper raises his or her hands to the lobes of the ears, or up to the shoulders. This is a sign of surrendering to God. The arms are then folded, hands on chest, placing the right hand over the left. This is a symbolic statement of giving preference to religion over worldly matters.

While standing with folded hands the worshipper pours praise upon the Highest Entity being addressed by him or her, recites several prayers, including an excellent prayer comprising all seven verses of the first chapter of the Holy Qur’an, Surah Fatiha:

In the name of Allah, the Gracious, the Merciful.

All praise belongs to Allah alone, Lord of all the worlds,

The Gracious, the Merciful,

Master of the Day of Judgement.

Guide us in the straight path,

After Surah Fatihah, a portion from the Holy Qur’an is recited. The worshipper then bows at the waist, resting his hands on his knees in adoration, to the Most Holy Entity just addressed, that is to say – Allah. The worshipper then stands upright, this time with his hands hanging down by his sides, and praises Allah. After this, he or she prostrates, with the forehead and nose placed on the ground, demonstrating the height of reverence, humility and submission to Allah. This represents the climax of the Prayer. In prostration the worshipper praises Allah. The Holy Prophet(saw) has said that one is closest to Allah while in prostration and therefore should pray to Him earnestly. Many believers, in addition to reciting the short prescribed prayer – Holy is Allah, the High – also whole-heartedly supplicate and earnestly seek Allah’s succour, to get rid of their difficulties both spiritual and worldly. This is followed by assuming a position of sitting with the legs folded and time is then taken to supplicate to Allah for provision and spiritual elevation etc. Then the worshipper goes down a second time into prostration.  In one unit (Rak‘ah) of Prayer it is only the prostration which is done twice, all other acts of worship are performed once only.

This completes one Rak‘ah (unit) of the Prayer. Two, three or four Rak‘aat are prescribed for different Prayers over a 24-hour period.

In this position, one praises Allah, invokes His  blessings on the Holy Prophet(saw), recites further prescribed prayers, then turns one’s face to the right, reciting in Arabic, ‘Assalamu ‘Alaikum Wa Rahmatullah’ – “on you be the peace and mercy of Allah”, – then to the left saying the same greeting. This salutation completes the Prayer.

While in Prayer, it is prohibited to turn one’s face right or left, or to talk. One stands before the countenance of Allah while praying and is cut off from others. When the Prayer is completed the believer is back among people of this world, once again. Hence, one greets them with the salutation, ‘Assalaamu ‘Alaikum Wa Rahamatullah’. Salaam (peace) is one of the attributes of Allah so by saying “Salaam”, the worshipper expresses the fact; ‘I have come from Salaam (peace), and have brought you peace.’

1Where water is not available, then a shorter symbolic ablution can be performed with clean dust. This signifies the importance of Prayer in Islam. 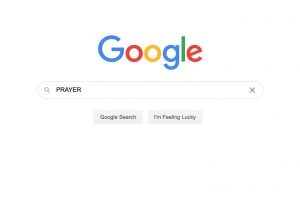 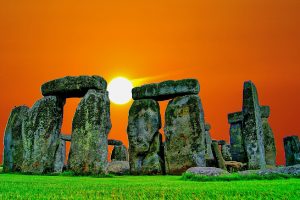