The international Bai`at (Initiation Ceremony) is one of the highlights of Jalsa Salana UK. Thousands of Ahmadis form a human chain, linked all the way to the hand of the Caliph (aba), as they pledge allegiance and reaffirm their faith. Tens of thousands of voices echo the words of the Caliph (aba), in what is one of the most moving, faith inspiring and most unifying experiences one can witness. This year, at Jalsa Salana UK 2021, due to restrictions in light of the pandemic, the International Bai‘at will not be taking place. However memories of past Bai’at ceremonies are still alive and engrained in the minds of those who have been lucky enough to attend in the past. Adam Alexander, a convert to Islam Ahmadiyyat shares his first experience of attending the International Bai’at.

It felt like a dream to be in the country of my beloved Imam (aba).

It had only been 3 years since I converted to Islam Ahmadiyya and by the Grace of Allah, I was blessed to be part of the International Bai`at (pledge of allegiance) [1] that had taken place in the UK. I witnessed this on MTA in the prior years, however, I had never imagined that I would be seated in the rows nearest to my beloved Imam during this blessed event.

As I sat awaiting the start of the ceremony, I thought about the importance of this moment and the companions that had taken the Bai`at at the hands of the Prophets and Khulafa of the past. I thought about the Grace of Allah, that He alone can take someone out of darkness into light. That any of His servants desiring His mercy would never be turned away empty handed.

The room became peacefully silent as our beloved Imam entered the Jalsa Gah (Site of the Jalsa) wearing the coat of the Promised Messiah (as).  The blessed moment was about to begin. I looked around the Jalsa Gah and saw so many humble servants and truth seekers who had also been awaiting this moment.

To my surprise I discovered that a non-Ahmadi guest, whom I had recently met the other day, was sitting in the chairs next to the green area. Jonathan Butterworth had attended the Jalsa Salana UK before, but I wondered what he was doing sitting here during the International Bai`at. I was worried that perhaps no one had told him about the ceremony. I thought maybe he was not able to leave in time. I began to pray that Allah would give him what He had given me and bestow upon him the certainty that He had bestowed upon me regarding the truthfulness of the Promised Messiah (as) and enable him to take this pledge of allegiance at the hand of the Caliph (aba).

As the pledge began the voice of every God-fearing person echoed the words of our spiritual leader. Every word of his became every word of ours. The concluding sajdah (prostration) caused the cries of many to fill the Jalsa Gah. The moment felt as if we were weeping on the lap of our Creator for eternity. I asked my Lord to make it so that I would never have to leave this moment. Unfortunately, it was over, and the ceremony had ended. The faces around me were filled with tears. We had all awoken from the lap of Allah.

I knew I had to find Jonathan and ask him about his experience. When I approached him, he was sharing his story of the previous night, during which he felt he attained such certainty of the truthfulness of the Promised Messiah (as) that he knew today must be the day that he performed the Bai`at at the hand of the Caliph (aba). This glorious day had truly been an inspiration for us both and would soon amount to both of us devoting our lives to the service of Islam Ahmadiyyat; soon there would be many converts before us.

It is my sincere desire that every convert to Islam Ahmadiyyat experience the International Bai`at ceremony in the UK and feel the cool breeze of heaven blowing through the Jalsa Gah in the land of our beloved Imam.

Until that glorious day approaches, those who desire it must avail themselves of the nearest experience which is to watch our beloved Imam live on MTA and hear the guidance that he imparts to us and heed to his words and act upon them with sincere devotion.

And if it be the will of Allah, you too will find your hand on the shoulder of your fellow brother in faith in an unbroken chain of believers leading all the way to the blessed hand of our leader, His Holiness, the Caliph (aba). 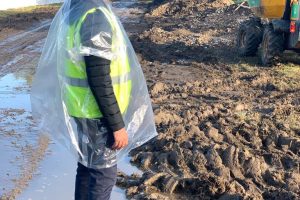 ‘As the puddles of water got deeper, so did my passion for duty’ – An Inspiring Story of Devotion at Jalsa 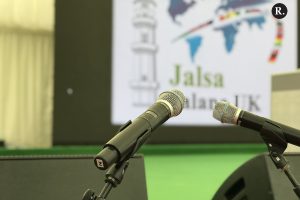 Jalsa Salana UK: A Vaccine of Brotherhood During a Devastating Pandemic
Experiencing the Blessings of Jalsa Salana UK in Morocco
Comment