Recently, my eight-year-old son asked me if I liked being a woman. I turned around from putting the cushions back on the sofa to look at him and asked him why. He looked at his baby brother and pointed out that when I had fallen ill during the pregnancy, I had been in a lot of pain. Wasn’t it hard being a woman, wouldn’t I rather be a boy? I smiled and told him no, I would never trade being a woman for anything. I loved it. I laughed as his little eyebrows rose in disbelief, but I later thought about his question in the greater context of men versus women. There is no doubt that historically speaking, being a woman has been tough and she has had to fight for her due rights; but if it weren’t for Islam, I would never have known how important and valuable it is to be a woman. My worth is equal to a man’s because God assigned both men and women the same purpose in life and revealed Islamic commandments so that society could function as a level playing field.

Every March 8th, International Women’s Day rolls around and the world discusses how far women’s equality has come and how much further we must go. As UNWomen states on its website, gender equality ‘refers to the equal rights, responsibilities and opportunities of women and men and girls and boys.’ [1] So whereas men have taken their due rights and opportunities, women have had to fight for them, bit by bit. A beneficent patriarchy doling out just enough rights to satiate women for the time being, almost as if scattering breadcrumbs before a group of hungry pigeons. As the Fifth Caliph and Worldwide Head of the Ahmadiyya Muslim Community, Hazrat Mirza Masroor Ahmad (aba) pointed out in a speech to young women:

‘Any rights granted to women in recent times have been the result of necessity, rather than any deep desire for progress and also as a means for the men to fulfill their own selfish desires. This is something that history has proven time and again.’ [2]

Whether it was 1848 when the Married Women’s Property Act finally allowed American women to receive their inheritance, or 1920 when women could finally vote, or even 1974 when women could open a credit application without the presence of a man, each gain required women to put in countless hours and effort. The story is no different in England, where women over 30 were given the right to vote in 1918 or to receive equal pay in 1968 or to avoid discrimination due to pregnancy in 1975. While the examples above are from the West, similar states of affairs can be found all over the world from Indonesia to South Africa to Pakistan.

The time, effort, and resources women expend to ensure a level playing field with men means they lose ground in attaining their purpose in life. In contrast to secular society, Islam establishes equality between the sexes by assigning a shared purpose in life. [3] The Holy Qur’an states,

‘But whoso does good works, whether male or female, and is a believer, such shall enter Heaven, and shall not be wronged even as much as the little hollow in the back of a date-stone.’ [4]

Thus, a Muslim woman who strives to be equal to her husband or father or son neither depends on a man to give her equality nor does she wait for it to be handed to her little by little through time. To ensure that both men and women have an equal chance to strive towards their shared goal, God has laid out two things. One, Islam teaches us that both men and women are answerable solely to God and therefore, they should both look to God for their rights. As the Fifth Caliph (aba) stated in an address,

‘…who are men to bestow rights upon them when their Creator, Allah the Almighty, has Himself bestowed upon them all that they need and desire? They should understand that Allah has granted them true equality based on logic and wisdom. Indeed, the way in which women have been described in the Holy Qur’an, and the way in which it is has established their rights, is completely unique and not found in any other religious scripture.’ [5]

Secondly, Islam provides a framework to give both men and women equal opportunity to pursue good works, for if women are asked to strive towards righteousness, they must feel safe and confident in their status as a woman. Therefore, a God without bias towards His creation, and with great care for a woman’s every feeling and sense of justice, awarded women the right to an education, to her own inheritance, to divorce, to an abortion in certain circumstances, etc. Muslim women needn’t fear that their rights are at the whim of whoever is in power or which party happens to dominate the Supreme Court, because they are secure in the knowledge that their rights are Divine law, inscribed within the pages of the Holy Qur’an.

Along with the more obvious rights, God also gave Muslim women rights which current secular societies do not award. For example, Islam dictates that men have no claim over a woman’s wealth, property, or income. In this way, women can save their money or property, invest, or spend as they wish. This takes away any pressure women may feel to supplement the household income and without this financial pressure, women can focus on their God given purpose with complete clarity. There is no equal to this right found in current society.

Another right God has granted us is the instruction of purdah [the veil] on behalf of both men and women, a right we might not have thought to claim, and frankly one which most people would like to take away from Muslim women. Yet recently, I have been seeing more and more posts on Instagram by women’s rights influencers calling on men to check their gaze, to stop the objectification of women. And what did God command men to do more than 1400 years ago in Islam? He instructed men to lower their gaze, to refrain from looking upon and listening to women. The Promised Messiah (as) elaborates on this instruction in The Philosophy of The Teachings of Islam,

‘We have been positively commanded not to look at their beauty, whether with pure intent or otherwise … It is almost certain that our free glances would cause us to stumble sometime or the other’ [6]

In God’s incredible wisdom, He granted women the right to be free of harassment and objectification, something which current nations and societies have yet to award. The murders of Sarah Everard and Sabine Nessa are just two examples of countless women who have been harassed simply because men feel free to gaze and linger and ultimately prey upon women. By implementing a high standard of modesty, Islam creates an environment equally safe for men and women.

Sadly, this paradise which Islam promises us is yet to be recognised. We all live in cultures and nations where women are denied their right to exist equitably alongside men. I only hope as I raise my own sons that they tread the path of Islam to establish what God Almighty intended so long ago. A world where both men and women truly respect each other and strive towards righteousness, a world of true equity. One in which women are no longer forced to call upon men to award or recognize their rights. For too long the equality women seek has been held captive in the tightly closed fists of men.

It is time to let go.

About the Author: Nila Ahmad lives in the southern United States with her family. Having graduated with an art degree, she has participated in the illustration of children’s books, as well as serving on the team for US magazine Al-Hilal. Her particular interest is in dispelling misconceptions around women’s status in Islam. Nila is an assistant Editor of the Women’s Section of The Review of Religions.

[5] www.alislam.org/articles/high-status-of-women-in-islam/ [6] The Philosophy of the Teachings of Islam, Page 24 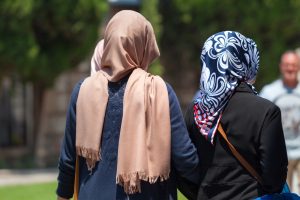 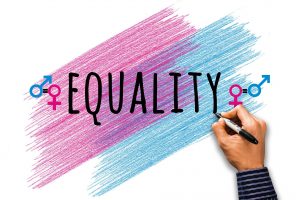 Islam Advocated for Women’s Rights Long Before Any Feminist Movement

Reaching for the Stars: Interview with Muslim Convert and Doctor, Anne-Marie Ionescu
Tributes to Women on International Women’s Day
Comment