‘God grant that we and our coming generations should live in this world as thriving branches of the tree that is the being of the Promised Messiah (as) and through us the names of the Holy Prophet Muhammad (sa) and the Promised Messiah (sa) should echo and re-echo all over the world with glory; and these words of God be fulfilled with due splendeur that “the feet of the followers of Muhammad (sa) have been firmly planted, in strength over a towering and lofty minaret!”’

Amtul Lateef Begum remembers an incident from Hazrat Mirza Bashir Ahmad’s (ra) final days: ‘Abba Jan (ra) went to Murree and Bhai Muzaffar sent me with him. While there, once my youngest son – then a very young boy – began some mischief. I chastised him, at which he ran to me for comfort. Witnessing this, Abba Jan (ra) began to cry and said: “Look, this is like the case of Allah and His man. Even when He admonishes His man, the man runs to him like a child to his mother.’’’

Hazrat Musleh Maud’s (ra) displeasure with Mirza Mubashar Ahmad had lasted over two years. Says Asifa Masooda: ‘Hazrat Mirza Bashir Ahmad (ra) trained his children to such a standard that my husband never once complained. All this time his chanda donations to the Ahmadiyya Muslim Community were not being accepted. He would continue to send them and when they were returned he would not spend a penny. Instead he would place it all in a separate bank account. Then each morning before work he would write a letter to Hazrat Musleh Maud (ra) asking for forgiveness.

By this time our son had been born. Hazrat Musleh Maud (ra) was too shy amid this situation to talk to me, so in his own way he would make it up by being especially loving towards my son – so much so that other children became jealous of him!

One day, I said: “None of this is my fault!” and ran from Hazrat Musleh Maud’s (ra) house. Someone followed me and handed me a prayer mat and said: “Hazrat Musleh Maud (ra) has sent this gift for you.”

Finally one day my husband had gone to work when a letter arrived. It said my husband had been forgiven. I immediately went to his work, but I could not speak. So with tears streaming down my face, I silently handed it to him.’

Hazrat Mirza Bashir Ahmad (ra) had been telling Brigadier Waqi uz Zamaan to remarry for some time. Finally, the Brigadier relented; he had seen a dream in which he was marrying a widowed or divorced lady. He asked for Hazrat Mirza Bashir Ahmad’s (ra) assistance, who requested the Rishta Nata Office (department to arrange marriages) for a list of girls looking to marry and passed it on.

Hazrat Mirza Bashir Ahmad (ra) had not included his own daughter’s name, but Brigadier Waqi uz Zamaan wrote back: ‘I had no idea you have a daughter who is divorced. The dream was about your daughter.’

Over the years, Amtul Majeed and Brigadier Waqi uz Zamaan were blessed with three children. A doting Hazrat Mirza Bashir Ahmad (ra) would lovingly send them gifts and pocket money. On reaching adulthood, both their eldest son and daughter were happily married to grandchildren of Hazrat Musleh Maud (ra).

Hazrat Mirza Masroor Ahmad (aba) narrates: ‘When Hazrat Mirza Sharif Ahmad (ra) passed away, I was 11 years old. I was sent to inform Hazrat Mirza Bashir Ahmad (ra). I knocked on his door and he said: “come in.’’

Before Hazrat Mirza Masroor Ahmad (aba) could say anything, Hazrat Mirza Bashir Ahmad (ra) asked: ‘Sharif Ahmad?’ and immediately ascertained that the brother he had teased as a child, with whom he had shared a hunting gun, about whose provision he would worry and whom he loved so deeply had passed away.

It was now his duty to inform Hazrat Musleh Maud (ra).

The wider community, which was busy with the 1961 Jalsa Salana, had to be informed. Capt. Khan recalls Hazrat Mirza Bashir Ahmad’s (ra) announcement: ‘He said: “Now there are two of us left,” meaning the sons of the Promised Messiah (ra). At this there was a great commotion, but Hazrat Mirza Bashir Ahmad (ra) continued with a confidence and command: “Neither my death nor yours can halt this divine movement.’’

A few days later, Hazrat Mirza Bashir Ahmad (ra) analysed the revelations which the Promised Messiah (as) had received about Hazrat Mirza Sharif Ahmad (ra), such as ‘Here comes the King’ in Al Fazl: ‘These four revelations which have been presented above were sent down to indicate various aspects of Miyan Sharif Ahmad’s life and times. However, it will be no surprise if in the future some elements are fulfilled among his progeny, because it is the practice of Allah the Almighty that when something is revealed about someone, sometimes it is instead fulfilled by his descendants.’

Hazrat Mirza Bashir Ahmad (ra) never wished to leave Qadian. He hoped for it to be part of Pakistan and perhaps he missed his hometown in his old age; more than a decade after migration he wrote in Al Fazl asking people to pray Allah the Almighty create the circumstances for the community’s return.

All the while, Hazrat Mirza Bashir Ahmad (ra) rented a property from Sadr Anjuman Ahmadiyya. Finally he said: ‘God Almighty has by His Decree placed us in the trial of migration, but if I spend the entire era of pilgrimage in a rented house…then in truth I have not accepted this trial.’

At last, Hazrat Mirza Bashir Ahmad (ra) had his own house built a short walk from Hazrat Musleh Maud’s (ra). Perhaps remembering the nickname his mother had given, he called his new home Al Bushra.

More than half a century after the passing of Mirza Mubarak Ahmad, Hazrat Nawab Mubarka Begum (ra) awoke from a strange dream: ‘I saw that my, brother the late Mubarak Ahmad, is ill and the Promised Messiah (as) is involved in his treatment and is praying with great concentration and in this effort he is moving around near [Mubarak’s] bed.

However he passes away.

I am standing at the door and am in a state of anxiety.

When Mubarak Ahmad passes away, the Promised Messiah (as) opens the door and comes to me and in a glorious and affecting voice says: “The believer’s job is to pray and treat and make effort of every kind till the last moment, but – when God’s decree is delivered – to become content.”’

Hazrat Nawab Mubarka Begum (ra) would surmise: ‘These were the words and it was a strange scene that I saw and it was engraved on my heart. According to my understanding, I now think that this was a dream about my middle Brother.’

By August 1963, Hazrat Mirza Bashir Ahmad (ra) was 70 years old and his health was in decline. He began to receive loving letters from Ahmadi Muslims from around the world – as far off as Australia – expressing their concern for his health. He would gratefully reply, thanking them for their prayers. Hazrat Mirza Bashir Ahmad (ra) passed away in Lahore on 2 September 1963. In his final moments, he uttered a word which had not passed his lips since early childhood.

About the Author: S. Taalay Ahmed (1990-2021) served The Review of Religions as the Team Leader of the Indexing & Tagging Project. He also served in the Muslim Television Ahmadiyya International (MTA) and the Press & Media department of the Ahmadiyya Muslim Community. 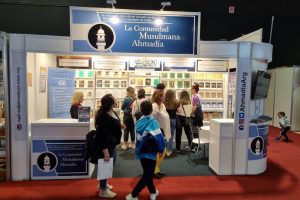 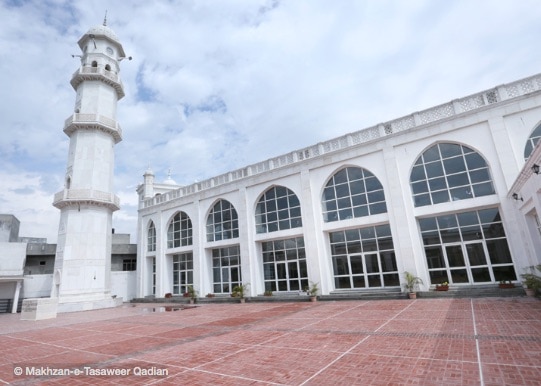 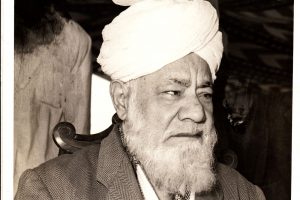 The Moon of the Prophets – Part 3

Friday Sermon Summary 21st October 2022: ‘A Great Victory for All of Humanity – Recounting the Blessings of the Caliph’s US Tour’
Comment