It was one of the most difficult things to hear, when my neighbour told me that two of her three children had been killed in a car crash. As a mother of three children myself, few things could sound more horrifying or heart-wrenchingly painful. My neighbour, whom I shall call ‘Delia’ for the purpose of this article, narrated the incident from the prime of her life to me some years ago. She spoke with such a quiet dignity that I kept my own emotions in check. Delia’s story reminded me how it is all too easy to forget the basic blessings that we enjoy in our day-to-day lives, such as our families and our health. Often, we become caught up in the trivialities of life: the humdrum of bad Wi-Fi connection, a broken washing machine, a parking fine.

Hearing of Delia’s profound loss reminded me that indeed Allah Almighty has acknowledged in the Holy Qur’an what is most dear to humans when He states, ‘Wealth and children are ornaments of the life of this world.’ [1]  It is the acquisition of money or a family that preoccupies most of us.  Yet, when these things are lost, it is the Holy Qur’an which gives us ‘hope’. In the same verse, Allah Almighty reassures His followers that, ‘… enduring good works are better in the sight of thy Lord in respect of immediate reward, and better in respect of future hope.’

As humans we do suffer but we survive, and we can even thrive. Muslims are taught a way to help with this process. It is with the remembrance of God Almighty and by adhering to His commandments, that we can attain peace and tranquillity. In Chapter 20 of the Holy Qur’an, we are taught that by glorifying our Lord before the rising of the sun and before its setting and ‘in the hours of the night and all parts of the day’, we may find ‘true happiness’ [2].

I believe it is Delia’s faith partly at least, that has helped her to endure and thrive. She is a Methodist Christian and as such some of her values coincide with my own as an Ahmadi Muslim. We both believe that we can enjoy a strong, personal relationship with our Creator. She believes that her faith in God should lead her to a life of serving others. I have seen her do this as she volunteers at our local hospital. It reminds me of the beautiful Islamic teachings conveyed to the world through the Holy Prophet of Islam, Muhammad (sa), 1400 years ago. He taught, ‘Next to faith in Allah, the best quality is kindness towards people.’ [3]

It was this quality of goodwill that brought Delia and I together.  We no longer live in the same neighbourhood, but in 2005 she moved onto my street. Other neighbours told me that she was a widow and alone. I then reflected upon how Islam has stressed the importance of caring for both neighbours and widows. In the Holy Qur’an, we are taught to show kindness to neighbours even those that are strangers. [4] The current Worldwide Head of our Ahmadiyya Community, His Holiness, Mirza Masroor Ahmad (aba), has explained the beauty and just how extensive the Islamic teaching regarding neighbours is, whilst addressing his own neighbourhood in Southfields, London, in 2006. He said that we are taught to show kindness to both a neighbour who is a ‘kinsman’ and a neighbour who is a ‘stranger’. He explained:

The Holy Prophet Muhammad (sa) also gave detailed practical teachings concerning the rights of neighbours to align with the principles of the Holy Qur’an. He taught his followers to help neighbours when they asked, to lend them money if requested, to tend to them in sickness, to congratulate them in times of felicity and to console them in adversity. He inculcated such a consideration toward neighbours, that he taught Muslims that if we are not in a position to share food with our neighbours, then at least we should ensure that no aromas of our cooking reach their homes. [6]

So, contemplating such teachings, I ventured to Delia’s house with a dish of food when I became her neighbour. Delia thanked me graciously for the food and I reassured her that we were close by and that my husband was in the medical profession, should she ever require such assistance. It was a few years later that I realised the impact that that initial small act of kindness had made upon her. I took Delia to a Ladies’ Symposium at our central mosque (Baitul Futuh) in London. When I introduced her to some of the members of my Ladies’ Auxiliary Association (Lajna Imaillah), the first thing she mentioned was that I had been the first person to welcome her to our neighbourhood.

Over the years, Delia and I have remained in contact. I have witnessed another positive consequence of my small acts of neighbourliness to her which has humbled me. Now, each year on her anniversary, Delia contacts me. At first, she gave me £50 and now she gives me £100, to put in one or more of the charitable funds of the Ahmadiyya Muslim Community. She believes that the money our Community collects is distributed sincerely and fairly. It is a good deed she does to commemorate her late husband. Consequently, I have put her money in funds such as the Maryam Shadi Fund initiated by the Fourth Worldwide Head of the Ahmadiyya Muslim Community (His Holiness, Mirza Tahir Ahmad [rh]), to assist young women with their wedding costs and the Buyutul Hamd Fund, which provides housing for economically challenged families in Pakistan.

Delia’s generosity on her anniversary has made me consider how each and every good deed performed has a ripple effect. Just as a small pebble thrown into a pond may only make a small, initial splash, but then its ripples widen, in the same manner, kindness towards neighbours cascades into the wider society.

‘…all the people residing in your vicinity, town, city or even country are your neighbours. Therefore, give them their due rights. No enmity should crop up in anybody’s mind. This is how you can spread peace, love and harmony in your surroundings.’ [7]

And so, Islamic teachings about neighbours and my own neighbour, have taught me a great deal. They have made me realise that when I benefit my neighbours, ultimately, the biggest beneficiary is me. 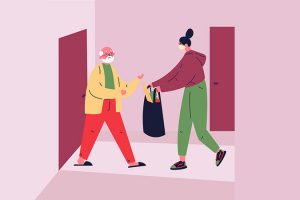