The political, economic and social unrest in the world is indeed the most critical issue of our time. The disturbances in the Middle East, tensions between North and South Korea, so-called Islamic militancy worldwide, sectarian strife, the conflict in Ukraine, ongoing conflict between India and Pakistan, gun crime in the U.S., violence around Africa and tensions between major superpowers are but a few of the reasons for unrest around the world. Ever since the world has become a global village, the unrest in one part of the world also seeps into other countries and causes reasons for concern worldwide. These are all pressing issues which cannot be ignored and the need for real peace on earth is more important than ever before.

The U.N. and world superpowers have been trying to resolve conflicts and unease in the world for many years, but their efforts seem to be futile. Instead of successfully being able to establish peace, their efforts seem to bring more widespread disorder and chaos. The world is fast spiraling into an abyss of violence and warfare and we seem to be at the brink of another potentially catastrophic world war.

The map highlights countries in which Islamist terrorist attacks have occurred between September 11, 2001, and May 2013. This shocking illustration shows the impact militant groups have had with many violent attacks being carried out causing increased tensions across the world.
(Accessed via Wiki Commons)

Well, surprisingly, when true Muslims see the current state of world affairs, it actually increases their faith. And the reason for this is that there are countless prophecies regarding this day and age, all of which are being fulfilled verbatim. These times were prophesied to come. The peace of the earth was to be disturbed due to the selfish motives and desires of certain parties. This was a day and age that many prophets had warned of; a day and age when spirituality would be lost and men would be heading to their own destruction. However, all hope was not to be lost. With warnings, God Almighty always gives a glimmer of hope. God Almighty had foretold this time to be the time when He would, once again, send His spiritual rain to revive the dead earth. He had given the glad tidings of a savior, a Messiah, a Mahdi, a Krishna, who would come in the form of one man and would once again unite people and establish real peace on the earth. He would call to the Creator and re-establish the kingdom of God.

In accordance with these prophecies, this man made his appearance over 126 years ago bearing the torch of peace, love and harmony. He came to unite mankind under one banner. He came to teach true moral values and end conflict and war. This man of God laid the foundation of real peace on earth. Likewise, in accordance with the prophecies, this man was followed by a system of spiritual leadership, which was to become the spearhead for establishing peace in the world. That system is the system of Khilafat.

The current Khalifah of the Promised Messiahas, Hazrat Mirza Masroor Ahmadaba, is at the forefront of bringing true peace on the earth. He has personally taken the message of peace to Capitol Hill in Washington, the European Parliament in Brussels and the Houses of Parliament in London. He has written letters to world leaders from Putin to Obama, Pope Benedict to Ayatollah Khamenei, Netanyahu to Ahmadinejad and David Cameron to Angela Merkel, explaining their responsibilities for the establishment of world peace and the requirements of true justice which are essential to bring about this end.

The Khalifah of the Promised Messiahas, being the spiritual head of the largest fully organised Muslim group in the world, has boldly condemned any acts of extremism and violence in the name of Islam, or any religion for that matter.

The United Nations and other peace keeping organisations have not been successful in resolving conflicts across the world and their actions have done more harm than good. Therefore, alternative methods must be used to ensure safety, security and peace between nations.
(Accessed via Wiki Commons)

Nowadays, the religion of Islam is blamed for the lack of peace in the world. However, in accordance with the true teachings of Islam, he has advocated the message of ‘Love for All, Hatred for None’ and speaking against the evil acts of the so-called Muslims he explained that, “for true peace to be established mankind had to recognise its Creator and submit before Him. The Holy Prophetsa forewarned that a time would come when the Muslims themselves would forget the true teachings of their religion and would not pay due heed to the Supreme Being and would only pay lip service to their belief. Similarly, the people of other religions would also fail to truly recognise the Supreme Being, whilst those who did not believe in religion would fail to even acknowledge the existence of a Supreme Being. And the Supreme Being that the Holy Prophetsa spoke about was the God Who is the Creator of the entire Universe. It is that God, Who amongst His many attributes, is ‘Salaam’—that is, the ‘Source of Peace’…The meaning of ‘Salaam’ is He who provides peace to the world and is the light from which all peace emanates. This, as the true source of all peace, God desires an existence of peace and harmony for all of mankind. Just as parents do not like for their children to fight or argue with each other and to cause disturbance in the home, in the same way Allah the Almighty does not like disorder or conflict among His Creation.”[1]

He explained and emphasised that, “God’s love and benevolence towards His Creation is incomparable and unique. He is also the Gracious and Merciful. He is the Source of Peace. Thus, when Islam stipulates that a Muslim should seek to inculcate the Attributes of God Almighty, it becomes impossible for a true Muslim to harm others. Rather, the faith of a true Muslim compels him to love all of mankind and to treat every person with respect, grace and sympathy.”[2]

Week in, week out, he fills the hearts of his followers, numbering tens of millions across 208 countries, with the teachings of peace, tolerance, justice, equality, mutual respect, co-existence, harmony and service to one’s nation whilst fulfilling the rights of God.

However, his efforts are not limited to mere words. He is an epitome of true peace and has initiated many schemes with the aim to spread peace throughout the world. According to the true Islamic teachings, service to humanity is just as important and equally a part of the Islamic teachings, as is the worship of God; the two are inseparable. If you love the artist, you must love his work. Under the auspices of Khilafat, Ahmadi Muslims, whilst holding fast to the core teachings of Islam, work tirelessly to serve their respective nations. Blood drives, charity walks, fundraising, feeding the hungry, providing universal education, disaster relief schemes and improving the living standards of people in the developing world are all part of his unparalleled efforts for the establishment of peace.

Annual National Peace Symposiums in which guests from all walks of life, from politicians to religious leaders, come together for open dialogue are a regular feature with the community.

The alarming number of the youth being radicalised is surely a cause for concern. Yet with the Ahmadiyya Muslim Community, at every youth event the members of the organisation fill the air with echoes, each one pledging to do their utmost for their country and nation; loyalty to the country we are living in is part of faith and upholding the law is our fundamental duty.

Peace, tolerance, justice, equality, mutual respect, coexistence, harmony and serving your nation, along with worshiping God are at the heart of true Islamic teachings. Arguably these are the core fundamentals for a peaceful, harmonious world and these are the teachings being imparted by our Khilafat and by every member of our community.

The Khalifah of the Promised Messiahas has established missionary colleges around the world to train Imams and missionaries to learn the true peaceful teachings of Islam and teach it to all members of our community whilst also raising awareness of the true Islam to counter the negative image portrayed by so-called ‘Muslim extremists’.

We also have hospitals and schools functioning around the world provided for people of all faiths or no faith.

Although death, destruction and conflict are widespread there is still hope as the Promised Messiah, Hazrat Mirza Ghulam Ahmad(as) has come to guide humanity with practical steps towards achieving tolerance, love and compassion. Following the Promised Messiah(as) is the only guarantee for personal and societal peace as all other leaders and organisations have failed in their attempts to bring harmony and justice to the world. (Accessed via Wiki Commons)

Another cause for concern is the response to provocations, which can easily disrupt the peace of society. However, despite state-backed persecution in countries such as Pakistan, where Ahmadi Muslims are boycotted and mercilessly martyred (like in the attacks on the mosques in Lahore killing over 80 people), Ahmadi Muslims still never retaliate and due to the guidance of the Khalifah of the Promised Messiahas, they only turn to Allah and put their trust in Him alone.

Recently, in western media we have seen a rise in anti-Muslim sentiments and even the depiction of our most beloved Prophet Muhammadsa in derogatory cartoons. Some so-called Muslims have reacted to these with hostility and even disrespected the flags and emblems of countries and organisations. Yet, the Khalifah of the Promised Messiahas has responded with powerful sermons outlining the perfect paragon of the Prophet Muhammadsa and taught Muslims to respond with their ‘Jihad of the pen’ and write articles in the media to explain the pure and pristine character of the Prophetsa.

Under the auspices of the Khalifah of the Promised Messiahas, millions of peace leaflets and messages are distributed all around the world. The Khalifah is changing perceptions and winning hearts. His efforts know no border, race or culture. His motives transcend any worldly motives or desires, as his sole driving force is attaining the pleasure of His Creator. This is the foundation for true peace on earth.

The tens of millions of members of the Ahmadiyya Muslim Jama’at are united under his hand, and truly find him to be their beacon of peace. His prayers and personal contact with members from all walks of life provide true inner peace and solace to all.

Under his leadership the peaceful teachings of Islam are being spread to the corners of the earth with millions joining his mission for peace every year. He has been given the solution to the turbulent times the world is passing through, he has been passed the key to reconciliation, justice, equality, love and true peace; the key of the true teachings of Islam, teachings of peace, unity and ‘Love For All, Hatred For None.’ Love will overcome hate; light will overcome darkness, just as prophesied many years ago.

About the Author: Mustenser Ahmad Qamar is a graduate from Jamia Ahmadiyya UK, a religious institute of languages and theology. He resides in Auckland, New Zealand, where he is currently serving as an Imam. He is also serving as an Imam to the islands of Samoa and American Samoa. He has also worked for Muslim Television Ahmadiyya (MTA) and appeared as a regular panelist in ‘Beacon of Truth’, a program answering the basic questions about Islam and Ahmadiyyat which rise in the minds of youth.

Rays of Wisdom for the Modern World Part 13 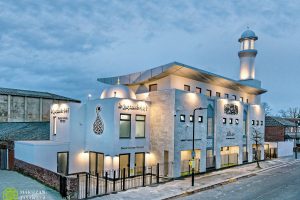 A Beacon Of Light In Southall 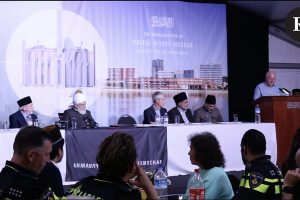 A Beacon of Light – Spreading Compassion to All

End Times, Armageddon & the Return of the Messiah
Connecting to Khilafat: A Guidance for Today’s Muslim Youth
Comment